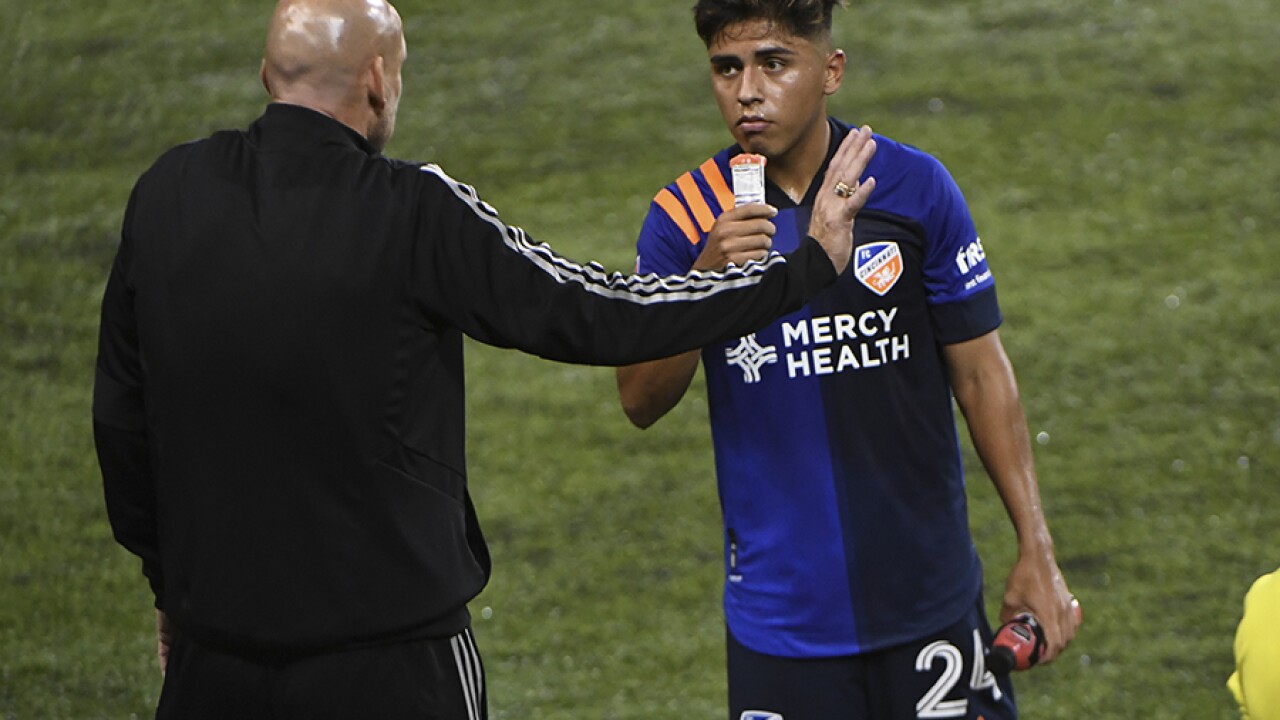 The third version of the “Hell is Real” derby felt familiar for FC Cincinnati.

Columbus Crew SC opened the floodgates with a goal early in the second half and cruised to a 3-0 win over the visiting Orange and Blue on Sunday in front of a socially-distanced crowd of about 1,500 fans at Mapfre Stadium.

FC Cincinnati (2-5-3, 9 points) had suffered a 4-0 loss to the Crew in Jaap Stam’s debut as coach July 11 in Orlando, but showed much improvement since then and managed to play Columbus to a scoreless draw on Aug. 29. Sunday’s third rivalry meeting this season was much like the first, as the Orange and Blue started off well and quickly went downhill after conceding one goal.

The Crew added to their lead in the Eastern Conference standings with the win, improving to 7-1-2 with 23 points.

1. One goal leads to more

Cincinnati has five clean sheets in eight league matches under Stam, but the club has been outscored 10-0 in the three matches in which it surrendered a goal and now owns a minus-9 goal differential.

Pedro Santos finished Luis Diaz’s cross that slipped through traffic in the 52nd minute to open the scoring, and 12 minutes later, Santos sent in a pass from the left flank that Gyasi Zardes tapped in past Przemyslaw Tyton to double the lead.

Zardes finished with a brace, adding his second strike in the 71st minute when he collected his own rebound right in front of the goal and drove it home for the final dagger.

“The thing is that after conceding, you need to show resilience,” Stam said. “You want to show that as a team, as players as well, and not be disappointed in what happened. I don't think we had that enough in the second half and then you make it easy for them and then very difficult for yourself. And that was a shame because you're hoping always for that next step.”

The Orange and Blue started off the game well and had some scoring chances early, but after the first 30 minutes, the Crew seemed to establish control and had the more threatening opportunities toward the end of the first half. That momentum carried into the second, and FC Cincinnati seemed to be on the chase the rest of the night. Stam called it not showing enough initiative.

Columbus finished with 18 shots, including six on target, and the Crew maintained possession for 59.2 percent of the game. Zardes has been a thorn in FC Cincinnati’s side since the club joined MLS last year. He has now scored seven goals against the Orange and Blue in five meetings.

2. The struggle to come back

FC Cincinnati’s deficit seemed insurmountable only because of how goals have been so difficult to come by lately.

The Orange and Blue scoring drought is now at 483 minutes in league play. It’s been 459 minutes since they scored on a penalty kick in a 1-1 draw against Portland in the MLS is Back Round of 16 game that didn’t count in the regular-season records.

They rank 13th in the Eastern Conference for goals scored with just six, and they only got seven shots – none on target Sunday. Columbus, meanwhile, is second with 16 goals in 10 matches, but more impressive is the fact the Crew have allowed just two goals in that span. New York City FC, which faces Cincinnati on Saturday, has the next fewest goals against with eight.

Stam said the players let down after the first goal but the mentality might have been different if the team had more confidence it could score. FC Cincinnati switched to a 4-3-3 to try to get forward more, but the Crew took advantage of more open spaces in their attacking third and that led to more goals for them.

“When you score goals and when you're winning games, it always gives you a different feeling of course, but still you know we could be very happy or satisfied at least about all the previous games even though we didn't score in the opportunities that we created, we could have scored,” Stam said. “Today we couldn't score again, but we conceded and then after that first goal, there was too much disappointment. If that keeps staying in your head, then you're thinking about that and you're not working after that anymore as a team in what you need to do and then it becomes very difficult to score or to win games.”

For the first time since play resumed in home markets, FC Cincinnati doesn’t have a midweek game to prepare for, so the players will get a bit of a rest before charging into game preparation for Saturday’s match at Red Bull Arena in New Jersey, where New York City is hosting while Yankee Stadium is occupied.

Midfielder Siem de Jong said the compact schedule isn’t to blame for the poor showing Sunday against the Crew but the flow of the game put more fatigue on Cincinnati than it otherwise should have.

Still, five matches in 16 days was no easy feat, so the chance to reset and recharge a bit will be a welcome change heading into the final game of the current schedule. MLS has not released the schedule for the third phase in the return to play following the four-month shutdown because of the COVID-19 pandemic.

“I think it gives us more time to prepare our bodies, our mindset to the next game,” captain Kendall Waston said. “I think having more time coaches also can make different type of things to recover ourselves and to prepare for the game. I think it's going to help us, hopefully. Also, we are not machines so (having) a lot of games, every four or five days, there's a little bit of fatigue, but it's not any excuse for today's game."