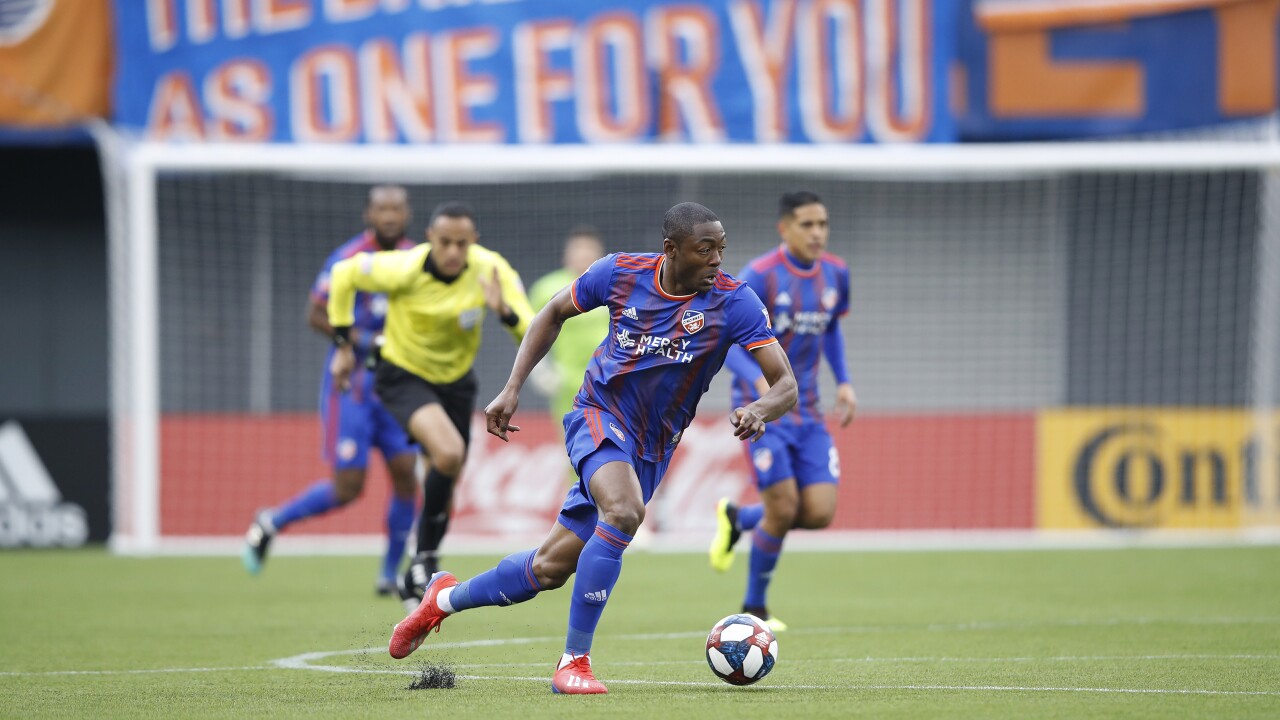 Joe Robbins | Getty Images
Fanendo Adi of FC Cincinnati controls the ball against the Portland Timbers in the first half at Nippert Stadium on March 17, 2019 in Cincinnati, Ohio. FC Cincinnati won its inaugural home match 3-0.

CINCINNATI — FC Cincinnati showed last week new leadership wasn’t going to allow unwanted contracts to tie them down when the club announced it was parting ways with forward Fanendo Adi.

Adi, the team’s first designated player, was waived Friday after a season marred by an OVI charge, injuries and complaints from the player that new leadership wasn’t treating him fairly. He played just 12 games, scoring one goal, and it was clear both Adi and FCC needed to move on. But now his absence makes even more clear the hole still missing in the attack.

“We want as much depth as we can get in those areas,” left back Greg Garza said. “If you look at when everybody was healthy, we were able to defend well and do well defensively and we just didn't have that end product offensively. Hopefully we can have more ability and opportunities created at that end of the field.”

FCC recently signed forward Yuya Kubo as another designated player; however, Kubo is expected to play more of a winger role. That leaves Darren Mattocks, Kekuta Manneh, Rashawn Dally and Brandon Vazquez as the only other forwards on the roster, and none are proven star center forwards. The club declined forward Emmanuel Ledesma’s option for 2020 in October and couldn’t come to an agreement on a new contract.

General manager Gerard Nijkamp and coach Ron Jans have made it clear they are still searching for additional attacking players, and that includes midfielders as well as forwards. The club created some buzz with reports of negotiations for a transfer of Uruguayan attacking midfielder Gaston Pereiro from PSV Eindhoven, but talks broke down Monday and it appears Nijkamp is moving on to other targets.

“I'm very satisfied with the players we have now, but we are still working on an offense, some more players coming to the roster,” Jans said Saturday as players reported for preseason training, which is now underway in Tucson, Ariz.

Jans added, “We are not ready yet on offense, but I already think with Kubo and with Brandon Vazquez we have players that can give us more goals and assists than last season. Last season the attackers didn't score so many goals and have so many assists, and that's not only because of them. You need to get the good balls, too. The statistics of goals and assists, it's easy to be better than last season. I also like (winger) Joe Gyau. He came in late and became fitter. He is also able to score and give assists, so it's also the players who were already here and still here. I'm not sure who, but I think they will come, at least two more players.”

Vazquez, 21, has potential to be a goal scorer for FCC but hasn’t had a chance to prove himself yet after spending the last three years playing behind Josef Martinez with Atlanta United. FCC acquired him in a trade with Nashville SC after the new MLS team picked Vazquez in the expansion draft in December.

Jans said he could be a big surprise for FCC; however, it’s not fair to expect him to carry the load just yet.

“He's so eager to perform and score goals,” Jans said. “He wants to be the top scorer, but he's still young and he didn't play -- I think 11 games with Atlanta last season, and it wasn't 90 minutes all the time. So, he cannot carry the team yet, but he could be a very big surprise. I think when he hears this, he might say, 'I will show you, Coach.' ... Let him do it.

“I think he's a real talent. He's got a good attitude. Physically, he is OK. He's a good player. But when you are behind Martinez and when he's injured, there's another Martinez, that's not easy. It's easier for him to get more minutes here and be important for the team.”

Players are excited to see what Kubo, who transferred from Belgian side Gent, adds to the team in the way of goal scoring and assists, but there is an understanding that more attackers are needed.
Veteran midfielder Haris Medunjanin, who was picked up through the waiver draft from the Philadelphia Union, said it’s not a concern that all the pieces aren’t yet in place as the preseason gets underway because sometimes it takes until the last day of the open market (May 8) to finalize transfers.

Manneh, who is working back from 2019 shoulder surgery, isn’t worried about new players potentially taking away playing time for others like himself.

“We always welcome challenges, and I feel like we do definitely need to add attacking pieces,” Manneh said. “It always helps the team. It's a healthy competition, and the team gets better as well as yourself. We want to do well this year, so if they are bringing in someone to help us, we will all welcome them with open arms. The team needs to improve.”

FCC’s interest in Pereiro shows the team is willing to invest in help for the attack, thanks to the addition of new investor Meg Whitman. According to reports from Eindhoven, the club was offering around $5 million and up to a $3 million transfer fee. That’s even with Cincinnati still on the hook for Adi’s $2 million salary since he was under contract for this year.

Captain Kendall Waston said it wasn’t a surprise the team parted ways with Adi because it seems best for both parties, but the move sends a message the club is serious about improving the forward spot.

“I think they’ll bring in a new forward, because there’s still time to bring more players in,” Waston said. “The more players they bring, the more competition it brings, and it raises the level of play. Anything they can do to make our club a winning club, let them do it.”