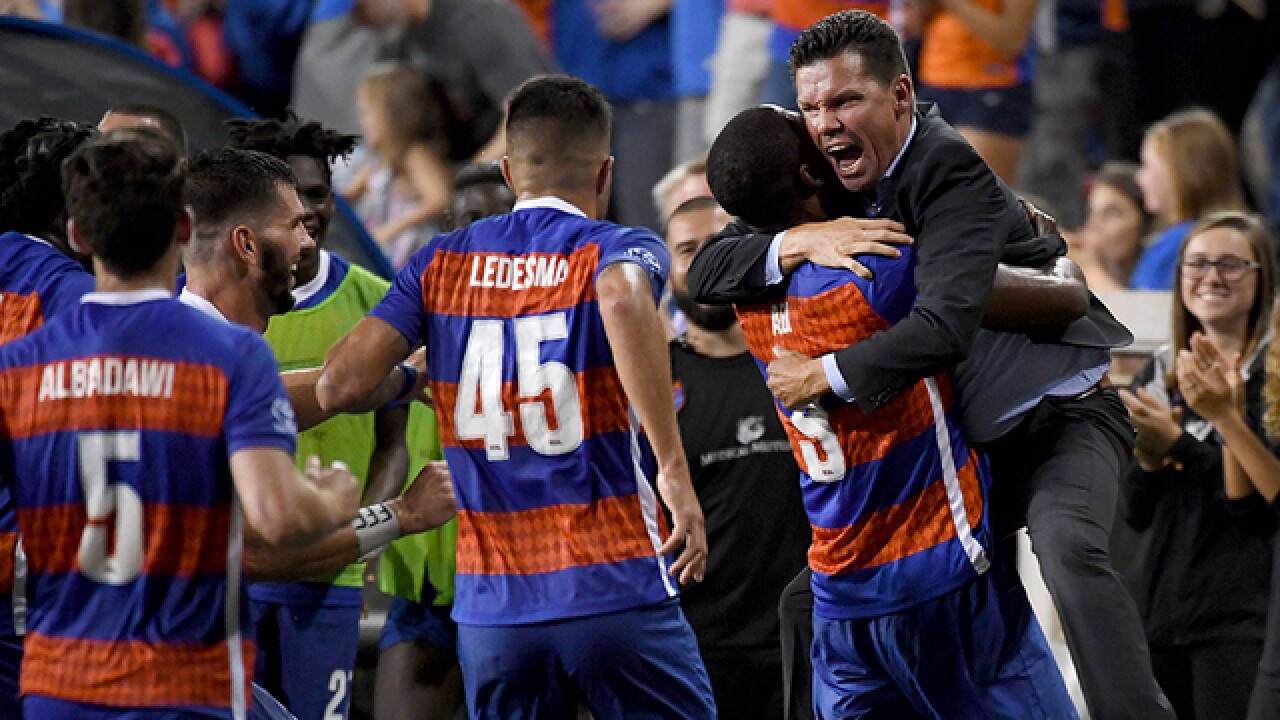 CINCNNATI - Fanendo Adi had been so close to scoring his first goal for FC Cincinnati in each of his past three appearances.

The club’s first designated player for Major League Soccer found the back of the net Saturday, and it couldn’t have come at a better time.

Adi tucked away a shot to the near post in the 88th minute to lift first-place FC Cincinnati to a 2-1 win over the third-place Pittsburgh Riverhounds SC, as the Orange and Blue became the first in the United Soccer League to clinch a playoff spot with seven matches remaining.

FC Cincinnati (18-3-6) had fallen behind early in the second half but scored two goals in the final 10 minutes to preserve its 16-game unbeaten streak. Dekel Keinan headed in an Emmanuel Ledesma free kick in the 80th minute before Adi sent the crowd of 25,735 fans at Nippert Stadium into an eruption of cheers.

Here’s a deeper look at the game:

1. Coming from behind: It had been a long while since FC Cincinnati trailed anyone, but the Orange and Blue fought themselves out of unfamiliar territory to get a big win.

Pittsburgh (12-34-10) took the first lead in the 57th minute when Romeo Parkes took a pass from Kenardo Forbes and sent a shot into the top of the net past Spencer Richey. The Riverhounds had been building momentum, controlling play the early part of the half – including missing a penalty kick in the 49th minute.  The goal seemed inevitable.

FC Cincinnati hadn’t trailed since June 13, but coach Alan Koch made some key substitutions down the stretch. He also adjusted the formation with about 20 minutes left to feature just three defenders (Justin Hoyte, Keinan and Lasso) for the first time this season.

Opportunities began coming for the hosts, and soon enough Keinan leaped high on Ledesma’s free kick to get the equalizer and his second goal of the season. Pittsburgh entered the game allowing a league-low 14 goals this season.

“The players,” Koch said when asked what unlocked Pittsburgh’s defense. “The individual moments by the players. They’re the guys that go out on the pitch, they’re the guys that work their backs off every day. They went out and grabbed an opportunity, and it wasn’t easy. We were playing against another team that’s at the top of the table. They’re a very good team and they showed that tonight.”

2. Adi comes through: Adi had to battle for his goal, taking on two defenders before cutting inside to find his opening. As soon as the ball hit the net, he ran over to Koch, who leapt into his arms, and a mob of teammates embraced him in celebration.

“I think he wants me here so much. He has supported me, and that’s just to show him I’m very tight to him for everything he has done for me,” Adi said. “It’s been a tough time for me, adjusting to the league, to the players and to the city as well, but he’s been there every day for me.”

The former Portland Timbers forward scored a goal in his last MLS game and had just missed a close opportunity shortly after entering Saturday's game in the 75th minute. Jimmy McLaughlin had sent him a perfect cross, but Adi's header went into the side netting for a goalkick.

Adi said he spoke more about that miss than his goal after the game because his job as a forward is to score goals and that one was handed to him on a platter. In the eyes of everyone else, he made up for it with that game-winner.

3. Time to celebrate: When FC Cincinnati crowded around Adi to celebrate his goal, the players had no idea they were minutes from clinching the club’s third playoff appearance in as many seasons.

No one even knew until about an hour after the game.

The league had given three different matches that would impact FC Cincinnati’s ability to clinch this weekend. The first scenario hadn’t played out as needed Friday, and it wasn’t clear that a North Carolina FC loss would be enough with an FC Cincinnati win. NCFC fell 3-0 on Saturday, so the game that might have also helped Sunday wasn’t going to matter.

FC Cincinnati cared more about beating Pittsburgh (Club president Jeff Berding always delivers an “I don’t like Pittsburgh speech” before this rivalry match) and showing character, battling back for the team’s 18th win and fifth in a row (both records). The Riverhounds were in third place, and this win was their second straight home victory against a top-3 opponent.

“Fun one for many, many reasons, obviously,” Koch said. “Being down is never easy coming back and you’ve got to show the character and the fight to come back, which I think our group showed. I think our group tonight did a very, very good job of managing the individual moments. [It was a] historic night in many respects and, most importantly, a big-time three points for our group.”

Koch said he would enjoy this was one a little more than others. FCC is now 13 points ahead of second place in the USL Eastern Conference.

Spencer Richey: Richey finished the game with four saves but none bigger than the one he made in the 35th minute, when he got a foot on a ball that deflected off teammate Forrest Lasso and changed direction last-second. Kenney Walker cleared it away on a header after the kick-save. He fortunately didn’t have to make a save on Kay Banjo’s penalty kick in the 49th minute, as Banjo shanked it over the crossbar. Richey said he was drafted with Banjo so he was able to “chirp at him a little bit” before the kick.

Kenney Walker: In addition to his assist on Adi’s goal (his second assist this season and first since July 18), Walker led the team in total duels (11) and duels won percentage (81.8) as he lost just two of them. He also was a part of several big moments in the game. In the 27th minute, he sent a long ball to Emmanuel Ledesma, whose shot was cleared off the goal line by defender Joseph Greenspan. Two minutes later, he collided with Banjo but recovered in time to clear the ball from danger.