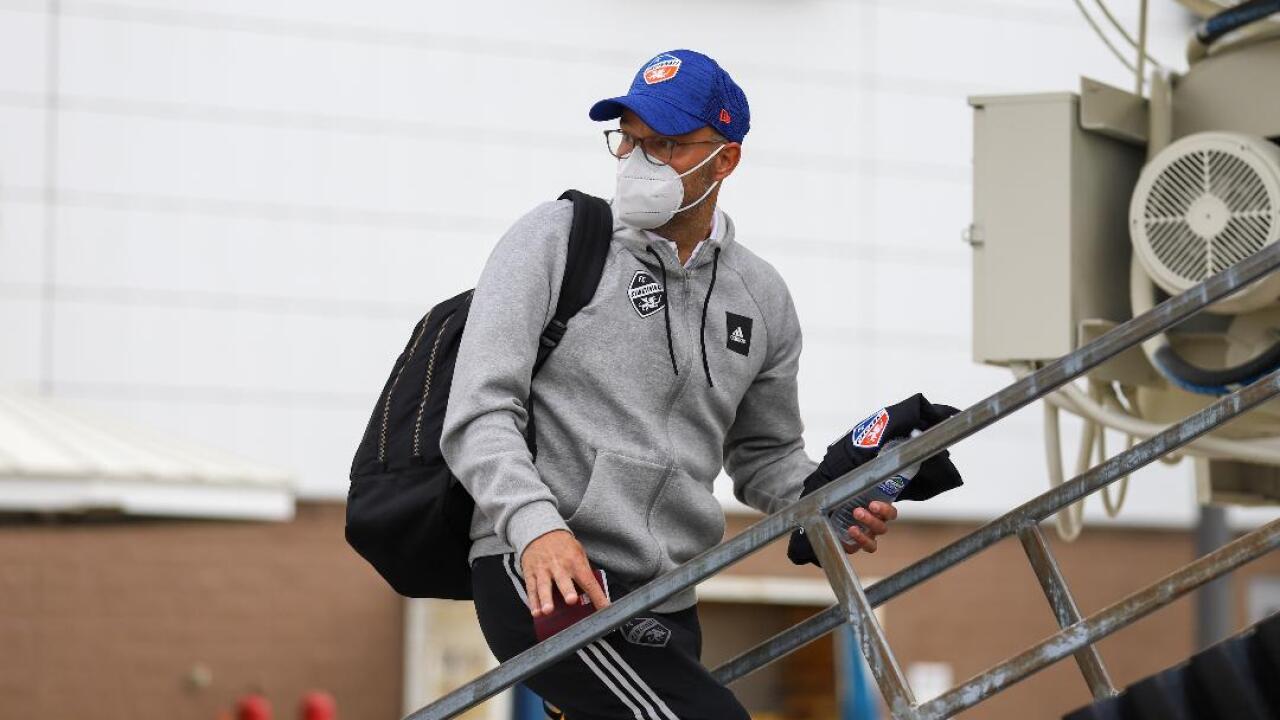 CINCINNATI — FC Cincinnati general manager Gerard Nijkamp closed a video news conference Thursday with one final thought he wanted to drive home for fans: A reminder the club must be realistic about expectations for this summer transfer window.

While the Orange and Blue are hopeful to use this window to improve the roster, Nijkamp emphasized the challenges of doing so with limited cap space, only one senior roster spot open and no international spots available.

The summer transfer window opened Wednesday and closes Oct. 29, meaning there is plenty of time to do business to add new players to the roster, especially while the period lines up with many other transfer windows around the world. FC Cincinnati also could move players out.

“Managing expectations is one part of my job, and I don't want to give too much positives to our fans,” Nijkamp said. “We must be realistic. If we move players, yes, then we have room to maneuver. But right now, just one spot, we have a little bit of cap space, but that's it. So, we must be very creative to do some movements this window.”

The Major League Soccer Players Association has not yet released salaries for 2020, so it’s unclear what kind cap space FC Cincinnati has to work with, but the club could make room for a high-salary player by buying down contracts of Yuya Kubo or Allan Cruz with allocation money.

That would open a spot for a designated player, which would hold a maximum budget charge of $306,250 at this point.

The biggest obstacle, though, is the lack of international spots, particularly for a team targeting several foreign players. Nijkamp was hoping a few players on the current roster would have secured green cards by now, as Cruz and defender Mathieu Deplagne did during the offseason to remove their international status, but the COVID-19 pandemic has delayed that process.

Nijkamp indicated he still plans to be active, so long as the right pieces fall into place and the timing works.

“Step by step, we try to improve,” Nijkamp said. “…The rumors are there and that means we are not sitting still on our chair. We are really busy to get with a lot of people in contact to get players in, nice prospects, but also to see if players in our current roster may be better to move away from because they have more chances in other clubs. But that is continuously the process where we are in.”

FC Cincinnati also has the benefit of sitting in the top spot in the Allocation Ranking Order, which gives them the first right to sign a top-level domestic player from the allocation list. That No. 1 position also could be traded for an international spot or allocation money.

Nijkamp has indicated the club is open to using its position to sign a player from the list but also has been listening to offers. The latter also is true in regard to moving players out, but Nijkamp expressed some frustration with potential deals falling through.

“We all like to talk about movements, but at the end of the day, we are doing nothing, and that's really different than in Europe, where I was working,” Nijkamp said. “In Europe, if someone called me and he said, 'Hey, I want to have this player from your club,' then in one hour or two days, we have a deal. And that's different here. And that's something I have to understand. But there is some movements around our players, but not always I will share it with Jaap (Stam) because today there is some movements and tomorrow, the club is going in another direction and there's nothing left anymore.”

FC Cincinnati was active during the winter transfer window and through the offseason, bringing in players like Kubo, Brighton loanee Jurgen Locadia and former Ajax midfielder Siem de Jong.

The team showed great improvement throughout the MLS is Back Tournament, making it to the Round of 16 only to lose to eventual champion Portland Timbers in penalties. That showed Nijkamp there is a decent foundation for the roster he wants to carry into the opening of the West End Stadium next year, but these next two transfer windows will be important for building that vision.

Nijkamp said he’s in “no rush” to make moves, because the team has played just six games together this year, including four under new coach Jaap Stam, and that’s not enough time to fully evaluate the group. Still, he sees need for another starting defender, pacey wingers and, if any midfielders are moved out, then FC Cincinnati would be looking to bring different types of midfielders into the group.

Stam and Nijkamp also have discussed some “wishes” that could be explored.

“Six games is not so much, so you have to give players also opportunities and time to improve,” Nijkamp said. “We will not do things in a rush. Yes, if there is coming nice opportunities, nice prospects on the table, we are thinking about it.”

MLS Commissioner Don Garber said on Tuesday during an interview with ESPN’s Taylor Twellman that he is hoping the league can take advantage of what might be considered a soft market because of the COVID-19 pandemic and its financial impact on clubs.

Cincinnati already negotiated Locadia’s transfer fee down as what Nijkamp previously called “a COVID discount,” but Nijkamp isn’t sure how prices will be impacted in the European market, where he does much of his recruiting.

“I think it's a little bit too early right now to give my understanding about it,” Nijkamp said. “I want to give it a little bit more time.”