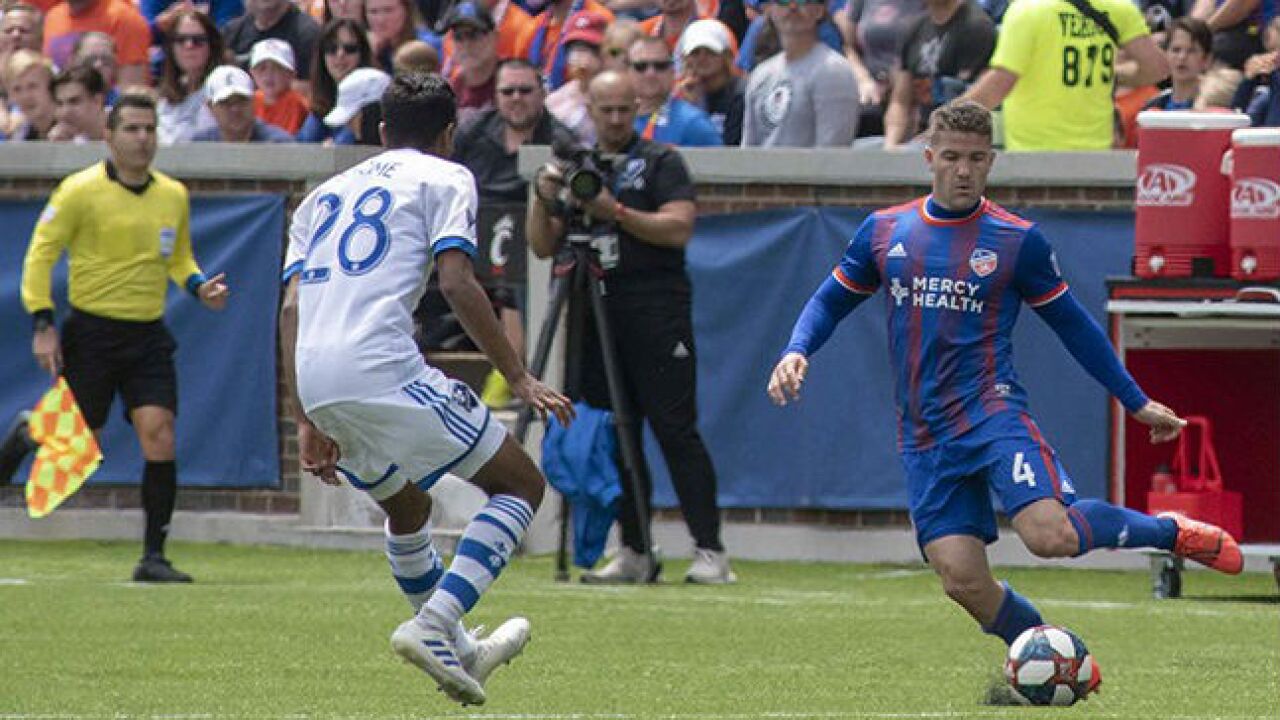 CINCINNATI — FC Cincinnati is preparing to leave for Orlando with a full contingent.

New coach Jaap Stam and assistant Said Bakkati recently arrived from The Netherlands and joined the club for their first training session together last week after awaiting work visas and government clearance to travel into the United States amid COVID-19 restrictions.

Major League Soccer, which shut down in March after two games, is resuming its season with a World Cup-style tournament in Orlando, beginning July 8. FC Cincinnati will leave June 29, according to general manager Gerard Nijkamp, and all 26 players on the roster and 19 staff members are expected to make the trip.

“Being back in the team with our complete coaching staff, with our new leader, that will help to be successful in Orlando and that is what we are working hard for day in, day out, 24-7, to be the best prepared team in the tournament -- for everyone, a new situation,” Nijkamp said in a Zoom call with local media Friday. “… It will be something special, but it (requires) also a lot of energy for everyone to be at the end of the day successful. … It starts with hard working to get commitments with everyone, good understanding about the way we want to play and the execution in the pitch against our opponents.”

FC Cincinnati will have designated player Jurgen Locadia on board for the tournament after a period of uncertainty with his loan from English Premier League side Brighton & Hove Albion originally set to expire July 5. The club announced Friday that Brighton agreed to extend the loan by one year, now expiring June 30, 2021, with an option remaining in place to purchase the contract at the end of that time.

Nijkamp said there also is an automatic trigger for a permanent transfer if Locadia plays a certain number of games, and FC Cincinnati was able to negotiate a “COVID discount” on the transfer fee, which originally was set at $10 million. Nijkamp would not confirm the new dollar amount.

“(He proved himself) by showing his potential and quality already by scoring the goal (in the opener against New York Red Bulls) and doing very good things for the team,” Nijkamp said. “What he did in on-ball position, what he did in off-ball position, in transition moments, and also with the new head coach on board, Jaap, we see a lot of potential. And, he showed already something in execution about goals, but we know, and we are convinced that he will be successful in this team and for himself.”

Locadia, a native of The Netherlands, missed most of the preseason after signing in early February and then having to travel back to Europe a week before the opener to finalize his work visa; however, he arrived in time to make his debut that first game and came off the bench to score in the 3-2 loss to the Red Bulls.

FC Cincinnati attacking center midfielder Siem de Jong, who signed Feb. 20, did not get a chance to play in the team’s first two games before the league shut down. But Nijkamp said he looks forward to seeing the combination of de Jong and Locadia in Florida. De Jong had played with Locadia at PSV Eindhoven in 2016-17 before Locadia’s $20 million transfer to Brighton.

“It’s good for the team,” De Jong told WCPO. “It’s tough games in a difficult environment, so we need as many players as we can get, and Jurgen is a great player. He’s good for the team, good for the club. It’s nice he could stay. In these times, it’s difficult to know what to expect, so it’s great he’s joining the team again and joining us to work toward success. He’s the type of striker I really enjoy playing with, his style as someone who comes back on the ball, it’s something I enjoy as an attacking midfielder.”

Nijkamp said there could be more news coming in terms of the roster. FC Cincinnati appears to have one spot on the senior roster open, but Hassan Ndam is listed as being out on loan and actually has to stay on the squad for now, according to Nijkamp. A trade or player move would have to occur for FC to bring any new players in with the transfer window set to open July 7.

LAFC recently made news while acquiring Honduras midfielder Andy Najar from Anderlecht, and only Inter Miami remains ahead of FCC in the MLS allocation order, which determines the order teams can go after players overseas who have former MLS ties or U.S. men’s national team experience. Asked whether FCC could be looking to trade its No. 2 position on the list, Nijkamp said “something is happening.”

“Our spot is valuable for clubs, so let's say we are working with another club on that part,” Nijkamp said.

Stam has said he is pleased with the work Nijkamp has done building the roster, but he also hopes to leave his own imprint in developing his team. He watched film of all the players and now is in the full evaluating process while finally able to work with the team in person.

The new coaches also are trying to incorporate their own ideas into FC Cincinnati’s tactics, building off what was started by former coach Ron Jans and assistant Yoann Damet, who served as interim coach for the first two games and up until Stam’s arrival. Centerback Maikel van der Werff said Stam already is demanding much from the players, a good sign he brings high expectations for them.

Teams normally have about a 40-day preseason to prepare for games but with full team training just starting last week, FC Cincinnati will have less than four weeks before its first pool match, which has yet to be announced.

FC Cincinnati will be looking to arrange at least one friendly in Orlando prior to beginning tournament play. Cincinnati is in Group E, along with Red Bulls, Atlanta United and Columbus Crew SC, and each team is guaranteed three games in pool play with the top two in each group advancing, along with four third-place finishers.

“It's definitely a difficult task, one that we're open towards,” left back Greg Garza said of getting ready in such a short period. “We're trying to get ourselves as prepared as possible to make these matches as competitive as they can be. It's obviously a different circumstance and situation for us to really, you know, get back into full team training ... to really start building that chemistry on and off the field again, and building those relationships once again, but you know I think for all of us, as I mentioned before, the most important thing is to really get back in that competitive manner and start competing against other teams around the league.”