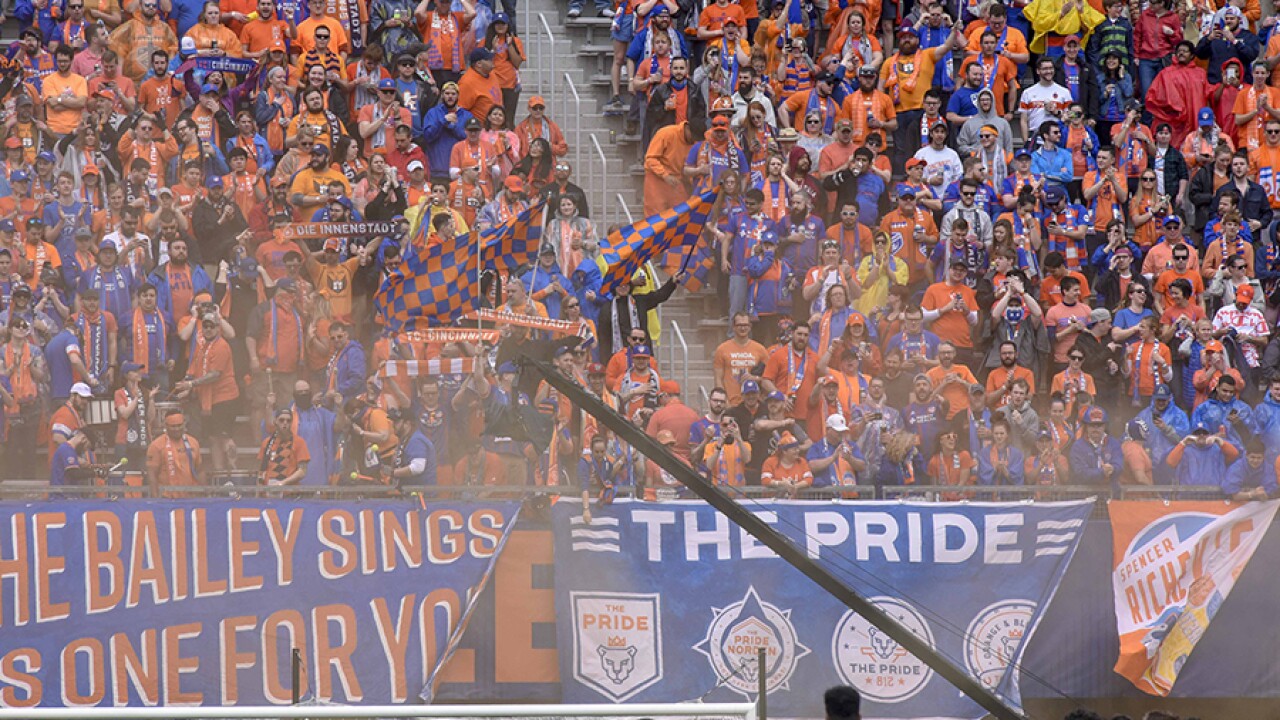 CINCINNATI — FC Cincinnati wrapped up a busy stretch of three games in eight days with a hard-fought point at home.

The Orange and Blue played Chicago Fire SC to a scoreless draw Saturday in front of 26,466 fans at Nippert Stadium to move to 6-22-4 (22 points) with two matches remaining. They were coming off a 2-0 loss at Atlanta on Wednesday, which followed a 1-0 win at Montreal on Sept. 14.

Cincinnati plays its home finale Sept. 29 against Orlando City, which is still fighting for a playoff spot.

FC Cincinnati has picked up four points and two clean sheets in the last three games, a drastic improvement since a 5-1 loss against Toronto FC on Sept. 7. The team even looked better during the one loss in that eight-day stretch, against Atlanta on Wednesday.

Coach Ron Jans said the team refocused after Toronto and the ability to back immediately with a 1-0 win at Montreal on Sept. 14 gave FCC the confidence it needed to move forward.

“When you get more confidence, you play better soccer,” Jans said. “I think that helped, but it's never one thing. We even missed some good players, but having the result against Chicago and another clean sheet, it's not too bad.”

Przemysław Tytoń, who made his 10th straight start, was in goal for both clean sheets and said he’s seen a different mentality. FCC has conceded a league-record 74 goals this season (tied with the 2018 Orlando City team), but the defense especially seems to be showing progress lately.

The Fire’s best chance was a near own goal that van der Werff deflected backward over the bar. They had one shot on target all night. “To get a clean sheet is always a good feeling, not only for me but the whole defensive block,” Jans said. “We got it because we fight. We had luck as well, but we did good as a whole defensive block and the whole game we didn't let too much space to the opponent, so that's why we finish with a zero. I am proud, happy, and it gives us extra motivation for the next games.”

The point was especially satisfying since it was the first one earned at home since a July 6 win over Houston, and it also came against an opponent still fighting for a playoff spot. This was an important game for Chicago, which remains three points out of a playoff spot with two games left.

FCC struggled with its passing in the first half and had just three shots, but fortunately, Chicago wasn’t much better with six shots all off target.

At halftime, Jans replaced rookie center forward Rashawn Dally, who had just 33 percent passing accuracy, with winger Joe Gyau and moved Emmanuel Ledesma to the center forward spot to try to open up more space in the attacking third. As the game wore on, FCC started intercepting more passes and finding space to move the ball in transition, but the Orange and Blue either lost the ball on the dribble or with the final pass.

“I didn't think we played well in the first half, especially at the beginning of the game, but after that you fight and you fight and get better in the game,” Jans said. “We made the substitution to get more depth with Gyau. ... And I think it helped, but we knew the longer the match would last, the pressure on Chicago would be bigger and bigger and the spaces would be bigger and bigger and we should have taken advantage of that because in the end the pitch was all open. I think it was more an advantage to Cincinnati than Chicago and we should have scored and didn't and they could have scored also. So I'm satisfied with the team spirit.”

FCC seemed to be the more dangerous of the teams and almost scored on a couple of close chances in a minute span late in the game. Roland Lamah cut in from the right and had his left-footed shot saved in the 79th minute, and then moments later, Maikel van der Werff header’s hit the cross bar. Earlier in the half, Gyau and Ledesma had a nice give-and-go but the final pass from Ledesma was too far ahead of Gyau.

“We started a little higher and tried to expose the space in the back a little more, just by throwing numbers forward, trying certain things,” Gyau said. “…It was a hard-fought point. The game could have gone either way, but I think this gives us some good momentum going into the next game.”

Rookie Tommy McCabe was expected to start Saturday and wasn’t sure he would even get in the game, but Caleb Stanko came down with an illness and McCabe learned about an hour before kickoff that he would be replacing him in the lineup.

It was McCabe’s second MLS start, and he ended up named the “Man of the Match” after doing a lot of dirty work as the team’s defensive midfielder. He had a team-high 70 touches and three tackles, as well as an 84.2 percent passing accuracy.

“For him it was a great chance,” Jans said. “… I think he played very mature and not losing a lot of balls. I think Nicolas Gaiton is a very good player and he defended him well. He shows he is comfortable on the ball. I think Tommy McCabe had a good game and maybe even better because he only heard it maybe 45 minutes before the game started.”