Alan Koch: 'It's nice to be back, to be honest' 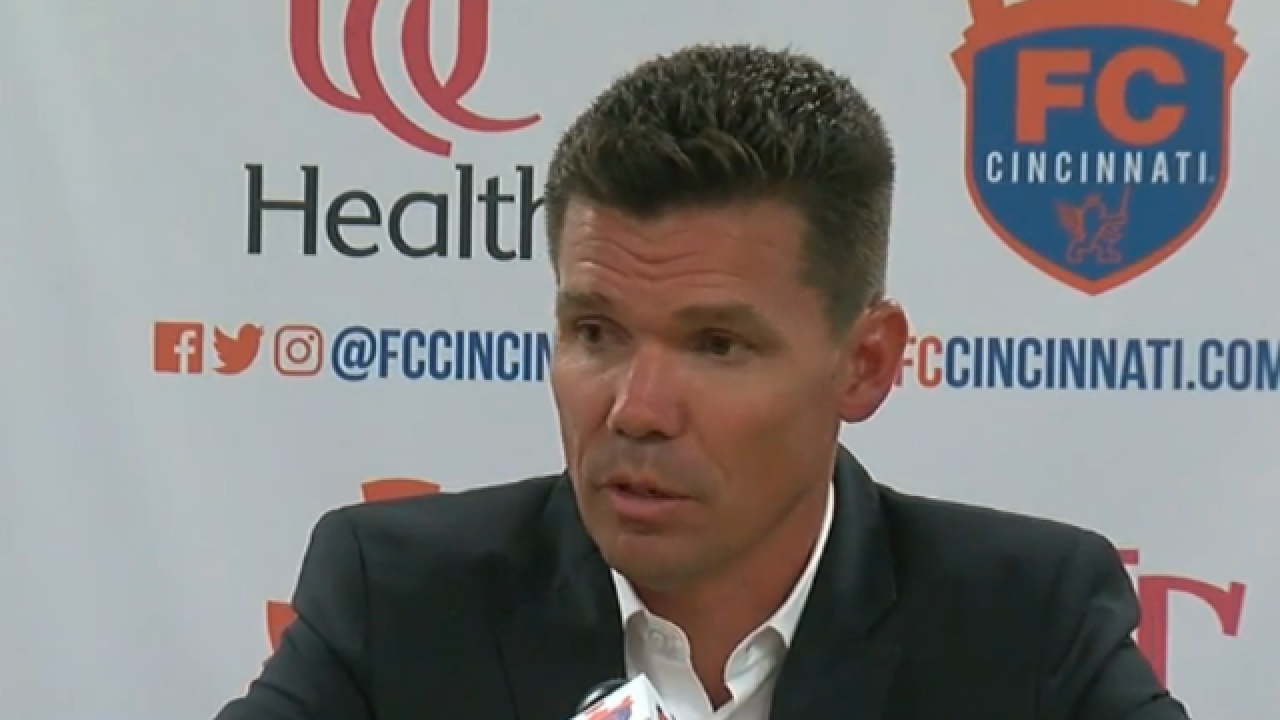 CINCINNATI - FC Cincinnati put together one of its most complete games this season in an important part of the schedule.

The Orange and Blue extended their lead in the United Soccer League Eastern Conference with a 3-0 win over third-place Charleston Battery on Saturday in front of 27,142 fans at Nippert Stadium. With three home games left, FC Cincinnati broke its own USL single-season attendance record with 352,709 fans attending 14 games.

Cincinnati now heads on the road for two matches this week on a 13-game unbeaten streak.

Here is a deeper look at the game:

1. Fast start: It was big for FC Cincinnati to score first, as Charleston hadn’t trailed in 11 matches coming into Saturday and was looking to gain ground on the Eastern Conference leaders.

Emmanuel Ledesma took on several defenders to get FC Cincinnati on the board in the 21st minute, stealing the ball about 25 yards out. He dribbled into a narrow opening and wedged a shot through to the far post from just outside the box. The goal - his 11th of the season - leads the team.

The Orange and Blue didn’t stop there, though, adding another goal before halftime. They haven’t looked particularly strong in the attack the past two games so it was an encouraging sign heading into the break.

“It’s nice to be back, to be honest,” FC Cincinnati coach Alan Koch said. “I don’t think we were very happy with how we performed in the last few games even though we got positive results. I think the guys were absolute class from the start until the end. I think we managed the game very, very well and it’s a thoroughly deserved three points against a very, very good team tonight.”

FC Cincinnati then got an own goal just before the final whistle when Nazmi Albadawi’s pass to Fanendo Adi was deflected by a Charleston defender. Cincinnati seemed to be in a good rhythm throughout the match, which resulted in 82 percent passing accuracy and 54.0 percent possession, and the defense held up as Spencer Richey collected a second straight shutout.

2. Key counterattack: The timing of the second goal was crucial. Shortly after Charleston’s Ataulla Guerra hit the crossbar on a potential equalizer from the top of the 18-yard box, FC Cincinnati intercepted the ball and scored on the counter in the first minute of stoppage time before the half.

The game easily could have been 1-1 at that point, had Guerra’s shot been a touch lower, but FC Cincinnati got the ball back and worked it around with a series of nice passes and some unselfish play to make it a two-goal lead.

Corben Bone sent a pass to Albadawi on the left side going into the box, and Albadawi played it back across with numbers up on the Charleston defense. Emery Welshman, coming up the center, could have taken it but left it for Bone, who was trailing to the right side and had an open shot to the far post for his fourth tally of the season.

“I think it started from some quick defending,” Bone said. “When you win the ball that high, it turns into offense pretty quick. So, a little counter attack and a couple of (passes). … Emery laid it off to me and they started making runs. I found Naz and he found me again – and Emery with the great dummy, which opens the space up for me – thankfully I found the back of the net. Testament to those guys. They worked hard all night, putting pressure on those backs and it paid off.”

3. Six-point win: FC CIncinnati gained three points with the win, but it felt like a six-point swing because the outcome puts Charleston three points further behind.

The Battery entered the match just five points back in third place. Cincinnati now has a seven-point cushion ahead of second-place Pittsburgh, which drew with Charlotte on Saturday, and the Orange and Blue are 16 points up on ninth place, which is the first spot outside the playoff picture.

The Orange and Blue have 10 games left but just three more at home. They took care of business while getting comfortable at Nippert this summer, collecting 16 of 18 possible points during a six-game home stretch before heading to Atlanta on Wednesday.

“Out of the six games, I wanted to get four wins,” Koch said. “That would get us 12 points. … So, we’ll take 16. We obviously try whenever we can to put a plan in place and execute and get three points in every game. That’s unrealistic. We’re playing against good teams. We’re happy with three points tonight, we know we have two huge games ahead of us on the road to finish out this week.”

FC Cincinnati will be without Ledesma, who picked up his eighth yellow card of the season and will serve a one-game suspension for yellow card accumulation.

Fatai Alashe: One of FC Cincinnati’s latest acquisitions in the process of building the club’s first MLS roster for 2019, Alashe made his debut Saturday and looked solid. He’s been with the team less than three weeks and got the nod to start at a holding midfield position in place of Michael Lahoud, who eventually replaced him in the second half. Alashe led the team in fouls won with five, and he finished with an 82.4 percent passing accuracy rating. Not bad for the former San Jose Earthquakes midfielder, who hadn’t played a game since July 14 with San Jose and hadn’t started since June 30.

Forrest Lasso: Lasso had some big stops on defense to help FC Cincinnati get the clean sheet against his old team. The center back finished with three tackles and won all five of his duels. In the first half, he chased down a Charleston player on a breakaway and forced the ball over the touchline.