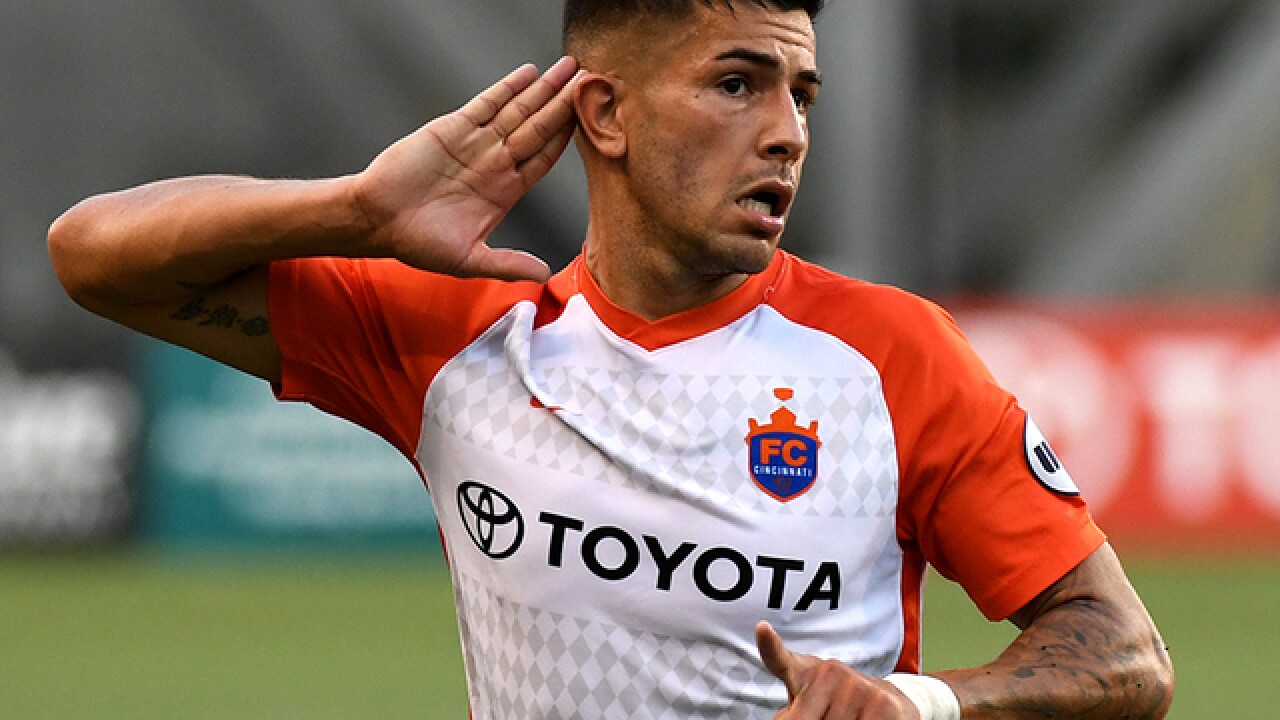 Copyright 2018 Scripps Media, Inc. All rights reserved. This material may not be published, broadcast, rewritten, or redistributed.
<p>FC Cincinnati midfielder Emmanuel Ledesma (45) celebrated after he scored on a penalty against Penn FC in the second half at Nippert stadium Sunday August 12, 2018. FC Cincinnati won 1 to 0 against Penn FC. Photo by Joseph Fuqua II for WCPO</p>

CINCINNATI - FC Cincinnati’s third anniversary almost ended in disappointment, but the club’s biggest playmaker came through for a late goal to ensure there was something more to celebrate.

Emmanuel Ledesma scored his 10th goal of the season Sunday in the 80th minute to lift the Orange and Blue past Penn FC, 1-0, in front of 24,249 fans at Nippert Stadium. Sunday marked exactly three years since the official launch of FC Cincinnati (14-3-6), which remains five points ahead of Pittsburgh for first place in the United Soccer League Eastern Conference.

The goal came after Penn captain Kenneth Tribbett took Ledesma down to award FC Cincinnati a free kick from about 25 yards out. Ledesma’s kick deflected off Lucky Mkosana in Penn’s wall and bounced into the lower left corner of the goal. He is the first player in the league to tally 10 goals and 10 assists.

1. Flat start: FC Cincinnati dominated possession all game but struggled in the first half to get anything going in the attacking third, as the hosts managed just three shots. Penn’s high press caused problems as FC Cincinnati couldn’t find seams and ended up trying to go over top without success.

Paddy Barrett hit the crossbar in the 43rd minute trying to head in a corner kick, but that was Cincinnati’s only real threat the first 45 minutes.

Cincinnati was coming off a disappointing 1-1 draw with Nashville last weekend when it was outshot 19-4, despite taking the lead 28 seconds into the match. It looked like that performance carried over into Sunday, but Koch pointed out that it’s not completely surprising to have some matches like this late in the season while managing the grind.

FC Cincinnati also has been impacted by injuries as of late. Center back Dekel Keinan was unavailable Sunday because of an injury in training Thursday, midfielder Jimmy McLaughlin and goalie Evan Newton were not 100 percent but were on the bench (McLaughlin entered in the 68th minute for Russell Cicerone) and midfielder Nazmi Albadawi seemed a little off after taking an elbow to the face 15 minutes in. Albadawi loast at least one tooth and busted his lip. Kenney Walker subbed for Albadawi in the 58th minute.

Koch said he turned to the 4-3-3 in part because of who was available, but it also seemed like a good idea to get guys forward against Penn’s 4-4-2. However, the visitors stacked the box and ended up dictating play through their press, As a result, opportunities were minimal for Cincinnati the first half.

“To be fair, in the first 45 minutes we didn’t do well,” Ledesma said. “I expect more from our team. In the second half, we kept the ball and kept the tempo high and attacked, attacked, attacked. I think they got tired and it was during those moments, we started getting the free kicks and chances like that.”

2. Saving grace: The tide turned in the second half with FC Cincinnati showing more patience on offense and finishing with 11 shots. Several chances were just off target, and it took a deflection on a set piece for the Orange and Blue to take the lead. Five of the team’s last six goals in league play have come on set pieces.

Koch doesn’t care how the goals come, but a scoreless game easily could have gone the other way.

“We would have liked to score early, but we didn’t,” Koch said. “But the guys stayed patient. I liked the patience a little better in the second 45 minutes. I think we tried to take care of the ball a little more than we did in the first 45 minutes.”

The struggle to find the back of the net is a recent trend for a club that not long ago led the league in scoring.

Before his goal, Ledesma had a hard volley hit off the post in the 56th minute and Barrett headed one just wide in the 60th. At the end of the game, Major League Soccer newcomer Fanendo Adi created an opportunity for himself but didn’t get a foul called that Koch thought should have been a penalty kick.

The team looks to get back to its June form when the goals came in bunches and within the run of play.

3. Important result: As disappointed as Koch was in the performance, the end result was most important. A draw would have put Pittsburgh within three points, and FCC has played one more match than the Riverhounds.

“I think at this time of the season, it’s really been a grind at times and we’ll gladly take the three points every game we play,” Koch said. “Of course, we showed some good moments in the second 45 minutes … it’s all about getting results.”

The schedule doesn’t get any easier. Six of last 11 games are against top-8 opponents, including next weekend’s match against third-place Charleston, two more against second-place Pittsburgh and a road match against fourth-place Louisville.

FCC hasn’t lost a league match since May 26 and extended its unbeaten streak to 12 games, tying the club record set in 2016.

Paddy Barrett: Barrett hasn’t seen a lot of playing time this season, but he didn’t show any rust Sunday. He earned the start at center back – and the captain’s armband – in place of Keinan, and Barrett finished with five tackles, seven clearances and one interception, and he won 13 of 21 duels.

Fanendo Adi: The former Portland Timbers forward has been with the club less than two weeks, but he looked “much more lively,” as Koch put it, in his second appearance. In 13 minutes, he created two chances – only Ledesma had more (four) and he played the whole game. Koch noted it’s not easy to join a new team and slide right in, but he praised Adi for his efforts.

Tommy Heinemann: FC Cincinnati fans recognize Heinemann from his brief time with the club before his controversial release at the start of the preseason because he didn’t pass a physical. Heinemann disputed his release and remains in arbitration with the club and likely came back to Cincinnati with a chip on his shoulder. He entered in the 67th minute to some booing from the crowd and ended up being a non-factor. Penn tried using his height to its advantage by playing more direct when he came in, but he created just one chance and didn’t get any shots.