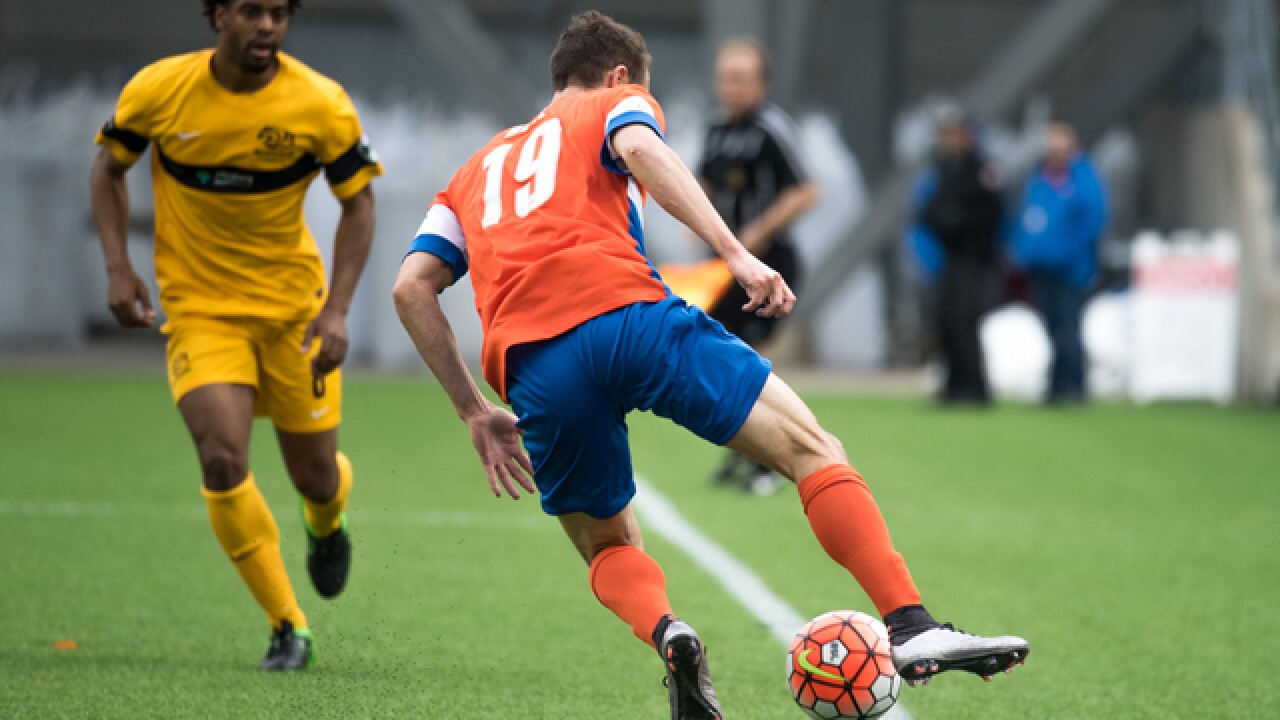 Phil Didion
<p>FC Cincinnati's Corben Bone saves the ball from going out of bounds during the FC Cincinnati vs. Pittsburgh Riverhounds game at Nippert Stadium on Saturday May 14, 2016. FC Cincinnati won the game at 1-0 (Phil Didion for WCPO).</p>

CINCINNATI — Major League Soccer safely returned to play amid the COVID-19 pandemic while in a “bubble” in Orlando, but now teams are set to resume the regular season in their home markets.

The league announced Saturday that each club will play 18 additional games in a phased approach, culminating with Decision Day on Nov. 8, followed by an 18-team playoff to determine the MLS Cup winner on Dec. 12.

FC Cincinnati will resume its second MLS season Aug. 21 at home against D.C. United, a game that will not be played with fans in attendance. Five other games have been announced through Sept. 12, including a “Hell is Real” derby against Columbus Crew at home Aug. 29.

The announcement also means FC Cincinnati will get a chance to say “goodbye” to Nippert Stadium, potentially with fans at some point this year, before the opening of the West End stadium in the spring of 2021.

"Quitting is never an option,” MLS commissioner Don Garber said when asked why the league didn’t quit while it was ahead following a successful MLS is Back Tournament. “Think of all the challenges MLS has had throughout its history... I think in this case, we believe it's important to get back to doing what it is that we were able to do successfully in Orlando, and that's get our players on the field and start to engage with our fans.”

MLS halted play March 12 after two games because of COVID-19 becoming prevalent in the United States. The league returned with the MLS is Back Tournament beginning July 8 at the ESPN Wide World of Sports Complex in Kissimmee, Florida. Teams played three group games that counted toward the regular-season standings, and 16 of them advanced to the knockout stage, including FC Cincinnati, which lost to finalist Portland in penalties during the Round of 16.

The tournament final is set for Tuesday, as the Timbers are set to face Orlando City SC. On Wednesday, FC Dallas and Nashville SC will begin a three-game series to make up for the group stage games they lost when a COVID-19 outbreak caused them to be removed from the tournament.

Out of more than 35,000 tests, only two positives occurred outside of the Dallas and Nashville organizations, proving the bubble was successful in containing spread of the virus. Teams were quarantined at the Swan & Dolphin Hotel, and fans did not attend games.

Now, the league will try to replicate that in home markets, where testing will occur every other day and the day before matches.

“There was risk involved in Orlando, and it wasn't easy,” Garber said. “As you know, we had challenges in the beginning, … so while we're mindful of the challenges of getting back into markets that other leagues have experienced, there are a handful of things that I think we learned that I am hopeful will help us.”

Garber said players now understand the importance of following the league’s safety protocols, as guidelines will be provided to players and staff to avoid the risk of contracting and spreading COVID-19 during their time away from club facilities.

The league also has focused the first phase of play on efficient travel, grouping teams in close proximity to one another for the first six games to be played by Sept. 14. Teams will take chartered flights or buses, and for the majority of road trips, they will arrive in the host market on match day and depart after the match that evening.

“We believe our players and our staff are focused on adhering to our protocols, and if we're able to do that, we ought to be able to get our games in,” Garber said. “And if we can't do that in a way that is safe and one that's ensuring the health of our players, then we'll have to address it. If that doesn't work, then we won't move forward after that period of time."

FC Cincinnati spent time Monday measuring Nippert Stadium in hopes of presenting a plan to allow fans, if the state allows it.

Garber said no plans have been approved for any teams to have fans in attendance and few probably will in Phase 1, but the goal is to allow them if local and Centers for Disease Control and Prevention guidelines are followed.

"There are leagues that are allowing fans, so we believe that it is smart for us to consider it, and not take the decision, at this point, to have a blanket rule to prevent it from happening,” Garber said. "… We've got to make a decision that is the right decision for our clubs and for the league.”

The schedule is as follows: