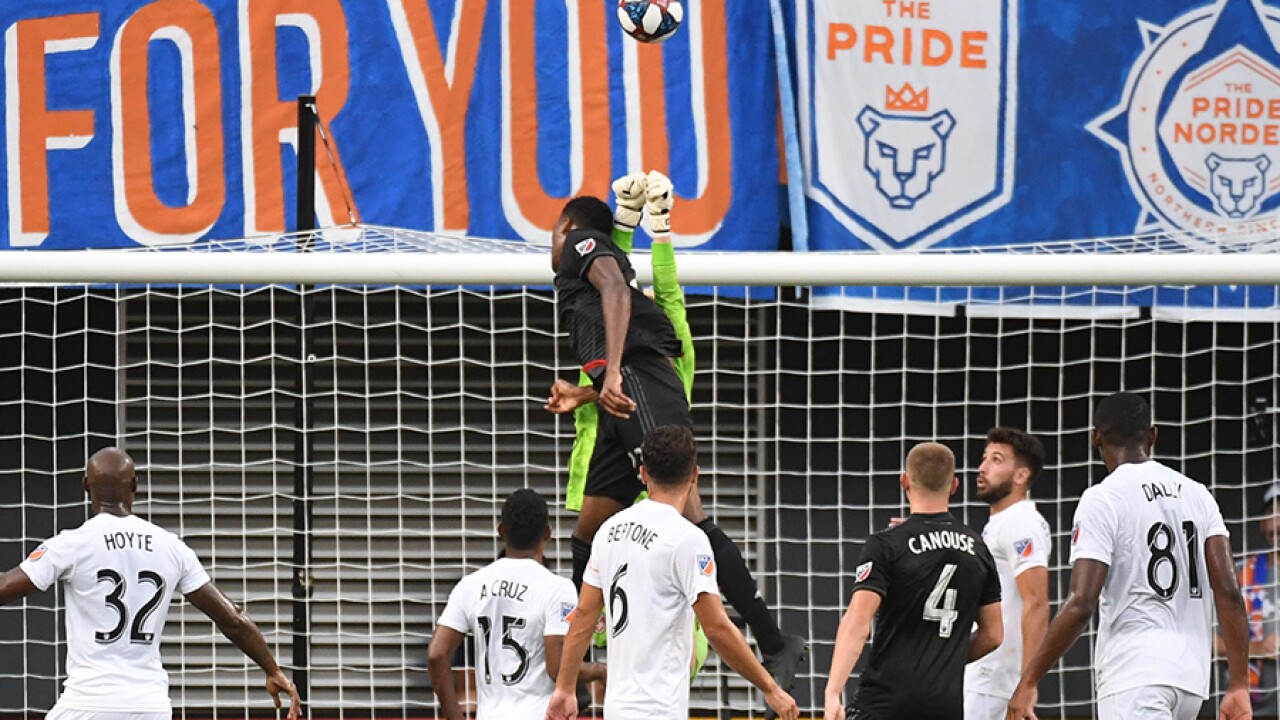 CINCINNATI -- FC Cincinnati returned to old habits Thursday and D.C. United took advantage, spoiling what otherwise would have been a great night for soccer in the Queen City.

Utilizing space from the wide gaps in FCC’s defense, D.C. United pulled away in the second half for a 4-1 victory in front of 28,774 at Nippert Stadium.

Cincinnati had plenty to be excited about going into the match. The Orange and Blue had shown improvement during a two-game win streak, and fans were looking forward to seeing former England star Wayne Rooney on the field as well as a halftime presentation recognizing Cincinnati native Rose Lavelle for her World Cup championship.

The latter two lived up to expectations. Rooney showed nifty footwork to beat center backs Kendall Waston and Justin Hoyte and put D.C. up 3-1 in the 64th minute, and Lavelle was greeted with a warm reception when she stepped onto the pitch at halftime.

But FCC didn't. D.C. scored three goals in a 14-minute span, and fans started making their way to the exits before the final whistle when it became apparent Cincinnati wasn’t going to bounce back.

Too much time and space

After an uneventful start to the game, D.C. United scored the first goal in the 42nd minute. FCC left Lucas Rodriguez wide open in the top corner of the penalty box, and he curled a shot to the far post. Rooney had the assist after drawing in two defenders and feeding the pass to Rodriguez.

FCC managed to level it in the 54th minute when U.S. men’s national team winger Paul Arriola was called for a handball in the box, and Emmanuel Ledesma drove home the penalty kick after using a stutter-step move to fake out United goalie Chris Seitz.

The Orange and Blue didn’t learn from their first-half mistake, though, and continued giving D.C. time and space to create chances. Five minutes after the penalty kick, Rodriguez was again open outside the box for the go-ahead goal. A deflection on his shot made it impossible for Spencer Richey to adjust, and then Rooney followed with an insurance goal that would have been difficult for anyone to prevent. Arriola provided the final dagger in the 73rd minute when he drove down the left flank untouched and delivered a strike to the far post from a wide angle.

“There was tactical discipline that at some points we switched off a little bit, lack of focus defensively in the organization,” interim coach Yoann Damet said. “We started giving up a bit of time, a bit of space through the lines and on the ball, so they were able to command a bit more, to use the spaces. They have quality players up front, so we knew we needed a lot to create opportunities to score goals.”

Players like Rooney and Arriola, who each had a goal and an assist, made it even more difficult to adjust defensively.

“When you have mental lapses like that, like we had on a couple of those goals, those are guys that only need a sniff and they will kill you,” Richey said. “Even with Rooney, it was something I knew he liked to cut back and shoot between defenders' legs, and I was thinking that all along when he gets his chance, but he hits it perfect and Justin was trying to get a block in but he hit it well. Arriola's fourth was the nail in the coffin, but obviously once it goes through it's tough to come back from.”

Although the back line seemed exposed Thursday, the lack of opportunities in the attacking third was just as problematic. FCC finished with 11 shots but only three were on goal.

Waston’s header off the crossbar in the 16th minute was the best chance FCC had beyond the penalty kick.

D.C. was playing with a 5-4-1 and was very compact and organized defensively, which makes it difficult to break down. Nothing FCC tried seemed to work.

“We tried to position our wingers very wide to allow attacking between the lines,” Damet said. “We also tried bringing the winger in more centrally to find the odd spaces and create options centrally. I think we did a great job in the first half finding Rashawn (Dally) and finding the third man with our attacking mid. Unfortunately, we didn't create enough. We didn't find enough spots in the back line. It's always difficult against an organized defense like that. .. We just need more movement in this situation. I think we had good possession but it was very lateral.”

One step forward, two steps back

FCC made tangible progress in its past two games, including a 2-1 win at Chicago last weekend, and the first half left no reason to believe the Orange and Blue couldn’t come out with at least a point from this one.

However, the sudden momentum swing in the second half showed there is still much room to improve, and the gap between FCC and top teams in the league remains pretty wide.

The Orange and Blue hold steady at the bottom of the Eastern Conference at 5-14-2 but just one point behind Columbus Crew SC, while D.C. (9-5-8) moves back into second place after just its second win in the last 10 matches.

“Well, obviously it is difficult right now when you lose this way,” Waston said. “…We couldn’t take the momentum when we scored from the PK. It is hard to lose this way at home because we were like having that feeling that we can win, we can win, but we have to keep our faith going, and this Sunday hopefully things go our way.”

FCC won’t have much time to let the loss sting. They return to play Sunday at home with just two days to recover and prepare for the New England Revolution, who they beat 2-0 back in March.

With New England sitting at eighth in the conference, the match is a good opportunity to try to collects points and gain some ground.

“It may be tough on the body, but it's a lot better only waiting three days after a loss to try to redeem yourself and for the team to try to give the fans a better show as well,” Richey said. “We'll get our minds and our bodies right and we'll be ready to go."