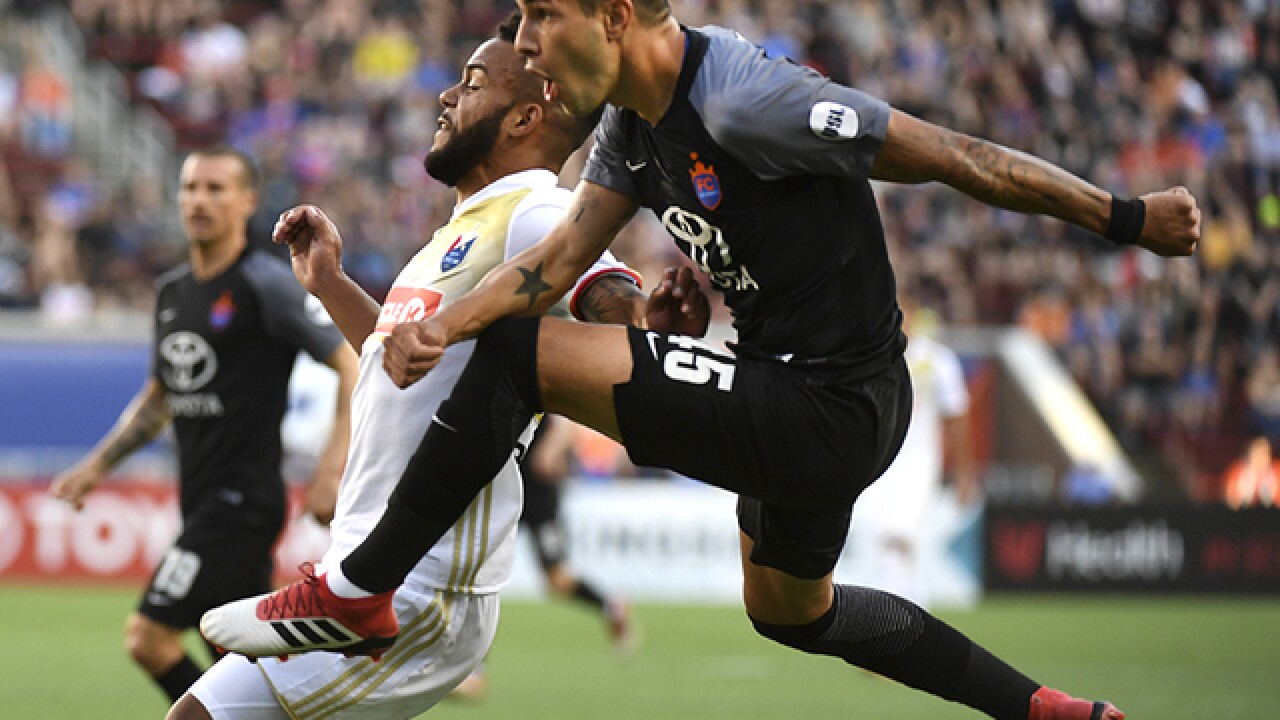 CINCINNATI - As if North Carolina FC wasn’t aware, Nazmi Albadawi reminded his former club just how valuable he is on the pitch.

The 26-year-old midfielder scored the first two goals to propel FC Cincinnati to a 4-1 win over NCFC on Saturday in front of 22,884 fans at Nippert Stadium.

Then, Emmanuel Ledesma took the spotlight. Ledesma had a hand in all four goals, assisting on three and scoring on a penalty kick he earned in the 69th minute to make it 3-0. Danni Konig provided the final strike before NCFC prevented the shutout with a late goal by Mario Lomis.

Here’s an analysis of the game:

1. Staying on top: FC Cincinnati defended its place atop the United Soccer League Eastern Conference standings and is looking every bit a league leader right now -- aside from an uncharacteristic 4-1 loss at Charlotte last weekend.

FC  Cincinnati is now 6-2-2 in league play (7-2-2 with the U.S. Open Cup win last Wednesday) and has scored two goals or more in six of its last seven games across all competition, including five with three goals or more.

On Saturday, FC Cincinnati came out aggressively, and Carolina was left chasing early, but the home side continued pressing to play one of its most complete games this season.

“The guys played all night long, which was awesome,” FC Cincinnati coach Alan Koch said. “I think we played some of our best soccer we’ve played all season tonight, so it’s very, very impressive. It’s very rewarding for the guys to see everything we work on every single day. You don’t always get rewarded for it in this business, but it was nice to see them go out and take care of business.”

2. Using space. FC Cincinnati began the season playing a more direct attack that involved a lot of crosses into the center forward, but on Saturday, FCC was in top form while building up the offense through creative ball movement.

It helped that Carolina was giving a lot of space in the middle of the field, especially in the first half when Albadawi, playing an attacking center mid, took advantage to create some chances. He had four of the team’s nine first-half shots, including both of his goals.

FC Cincinnati also benefited from playing Ledesma up front with Konig. It was just the second time this season that Koch has played with two forwards, and Carolina seemed to struggle with the tandem – too often leaving Ledesma free to roam.

“With the players we have, when we move the ball quickly, I’m going to find space in the pockets,” Albadawi said. “And if it’s not me, it’s Manu or Corben (Bone) or Danni or Kenney (Walker). We have som many talented players, you could list the whole team. As we continue to move the ball quickly, those gaps are going to open because the other team can’t guard everybody.”

3. Elusive clean sheet: FC Cincinnati was roughly six minutes away (with stoppage time) from its fourth clean sheets this season, but Lomis flicked in a shot off Kyle Bekker’s corner kick in the 86th minute.

FC Cincinnati picked up its three clean sheets in the first six games but has allowed 10 goals in the last five games across all competition. Opponents typically have been most threatening on counter attacks, rather than set pieces that are often headed away by FC Cincinnati’s towering center backs.

Because of the way FC Cincinnati is playing, shutouts are going to be hard to come by. However, NCFC didn’t get the opportunities recent opponents may have while Cincinnati’s defense held the visitors to 79 percent passing accuracy and just 42 percent on duels.

“How we are asking the group to play is very attack-minded, which is very exciting, and obviously… you do expose yourself a little at the back, which is why we’ve been conceding goals,” Koch said. “But as long as you score one more goal than the opposition, you’re going to win.”

Nazmi Albadawi: The midfielder returned from a rib injury Wednesday in the U.S. Open Cup win against Detroit City and got his fourth start of the USL season. It was the first two-goal performance of his USL career, following four seasons with North Carolina, which previously played in the North American Soccer League as the Carolina Redhawks. A native of the Tarheel State, Albadawi had been a Redhawks fan since the club was founded in 2006.

Albadawi quickly made his mark on the game, splitting a pair of defenders with a blast from 25 yards out to the upper right corner of the goal in the 11th minute. Then, just before halftime, he found the far post netting on a run to the right side of the 18-yard box. Out of respect for his old club, Albadawi did not celebrate either goal.

“Playing against North Carolina, for me, was special,” he said. “It’s my hometown club, the club I grew up cheering for and that club shares a special place in my heart. I’m happy we beat them. I want to beat them every time we play them, of course, but I wish them the best in their other games.

"For us, it was a great win tonight. I was just happy to help us win and stay atop the table.”

Emmanuel Ledesma: Ledesma was in his typical dangerous form, “Manu being Manu,” as a tifo hanging from The Bailey reads.

After assisting Albadawi’s first two goals, Ledesma got in on the scoring in the 62nd minute with a penalty kick into the right corner of the goal. Ledesma was tripped up while intercepting a backward pass from a NCFC defender to goalie Alex Tambakis,

Ledesma then recorded his third assist of the night in sending a pass to Konig for the team’s final goal in the 69th minute, moments before subbing off with apparent rib pain. The left-footed forward had left last weekend’s game at Charlotte with a rib injury after taking an early hit that he attempted to play through until the second half. He has tallied four goals and six assists in the last five games, including four straight games with an assist.

“He’s an awesome player,” Koch said. “That’s why we recruited him, why we signed him. He’s doing everything we knew he could do. If you can get Manu on the ball, he’s going to be a dangerous player. You’d rather have your dangerous players on the ball, close to the goal, so playing him up front with Danni to start off tonight puts him in a very good position.”

Paddy Barrett: In the postgame press conference, the first question directed to Barrett was: “Are you tired?” His answer was a sighing “yes.” Barrett played all 120 minutes of FC Cincinnati’s extra-time Open Cup game on Wednesday, then made his second league appearance, starting in place of centerback Forrest Lasso, who was suspended after picking up a fifth yellow card last weekend.

Barrett played the entire game and had two tackles, one interception, three clearances, 87.1 percent passing accuracy and won seven of 11 duels. His most noticeable contribution, though, was a header off the goal line for a save when Evan Newton went out to challenge on a play.