FC Cincinnati fatigues after week on the road, falls 2-0 at Nippert 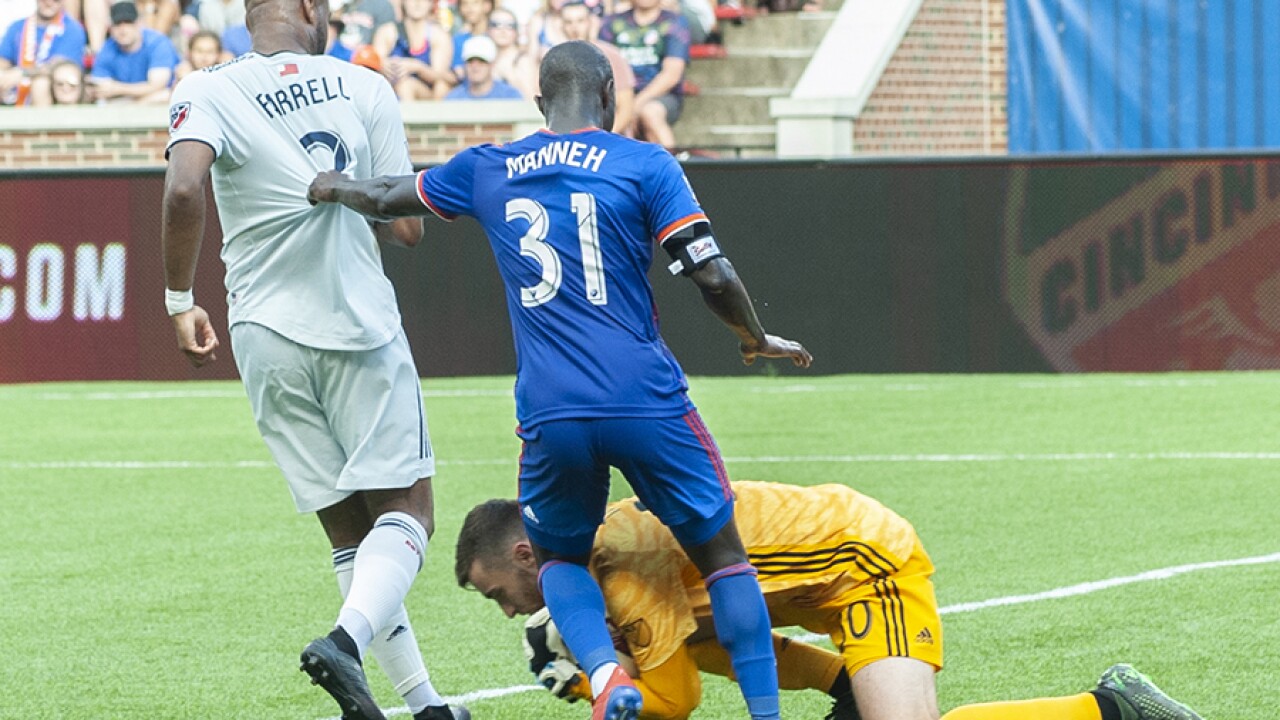 CINCINNATI — FC Cincinnati found itself in a familiar position falling behind early in Sunday’s match against the New England Revolution.

As so often has been the case, the Orange and Blue couldn’t climb out of the hole, and they dropped a second loss in four days, this time a 2-0 decision in front of a crowd of 25,095 fans at Nippert Stadium.

New England got on the board in the ninth minute when Carles Gil pounced on a loose ball in the box. Cristian Penilla shook free from his defender and sent a pass in to Gustavo Buo for a first shot, which Kendall Waston got a foot on but couldn’t fully clear before Gil got to it.

In the 55th minute, FCC left Antonio Mlinar Delamea open at the back post on a Gil cross following a short corner kick, and Delamea headed it home for the insurance goal.

FCC seeks to bounce back Saturday at Toronto FC for the first meeting of the teams, but here are three key points from Sunday’s loss.

FCC had beaten a struggling New England 2-0 on March 24, but Sunday’s match was a display of two teams that have gone in completely different directions since the early portion of the season.

A week after FC Cincinnati fired coach Alan Koch and named assistant Yoann Damet interim head coach, the Revs hired Bruce Arena as coach and sporting director. Both teams were struggling at the time, but while FCC has just two wins since making its change, New England has completely turned things around. With Sunday’s win, the Revs are unbeaten in 10 straight games, including nine of those under Arena.

FCC, meanwhile, has yet to name a new head coach as new general manager Gerard Nijkamp prepares to come fully on board in Cincinnati on Aug. 1. He’s been handling his duties from afar while also finishing up his technical director duties with PEC Zwolle. Former PEC Zwolle manager Ron Jans had been rumored to be in discussion with the club about the coaching position, but no decision has been announced.

The Orange and Blue have experienced plenty of change already this season as they await a new coach. Injuries and absences for international duty have created a constantly shifting lineup, which just now seems to be stabilizing a bit more. Damet made some necessary changes Sunday to rest a handful of players following Thursday’s loss. Sunday was the first match all season FCC has had three true forwards available.

If things don’t improve as chemistry has a chance to develop, FCC needs to focus more on the long-term – something the club has been turning toward while also trying to find immediate fixes.

Damet wasn’t happy with the lack of energy displayed by his team Sunday, though he acknowledged the quick turnaround from Thursday’s game may have played a factor in fatigue for some players. New England took control early, and FCC didn’t look threatening until the second half but even then, it was unorganized and the defense still allowing too much space and time. The Orange and Blue had just two shots in the first half but finished with 12.

“Probably one to put in the category of bad games we played,” Damet said of the game. “I am not happy about the content. I am not happy with the energy, the intensity tonight, so (it was a) frustrating night.

“I think in the first half we didn't show up with the right energy. We were very low, very, very deep, not aggressive enough, allowing time and space on the ball. We let them play, and I expect more from us. I expect to be dictating play more than that. In the second half, we showed a (lack of) discipline in the attacking side but also the defensive side. We created a bit more but it wasn't organized and again we gave up a lot of space because of our structure when we attacked.”

The defense was the biggest issue in the first half, but FCC proved susceptible to counter attacks because of that lack of organization in the offensive half. In the second half, Damet tried to make some adjustments but FCC couldn’t finish opportunities. The Orange and Blue had just 43 percent possession. Fans and players were asking for a penalty that could have changed the momentum in the first half when Frankie Amaya appeared to be taken down in the box in the 24th minute, but the Video Assistant Referee wasn’t even asked to check the film. Allan Cruz had a similar play just outside the box in the second half that the broadcast crew thought would be reviewed and wasn’t.

One of FCC’s best chances came on a Fanendo Adi header off a free kick delivered by Cruz in the 76th minute, but Revs goalie Matt Turner made the save. Turner also had a big double save on back-to-back shots by Cruz and Amaya in the 56th minute, shortly after FCC had conceded the second goal.

FCC goalie Spencer Richey had some big saves Sunday and has been making plays all season, but has been unfortunate to be the last line of defense when things haven’t necessarily gone so well with the unit in front of him.

This was the second straight game where Damet complained about the amount of space and time the defense was giving the opponent, and the back line hasn’t been playing up to expectations for a group that was the focal point of the roster-building this offseason.

Richey had five saves Sunday, and Damet remains pleased with his play, as he has been the starter over Przemysław Tytoń for most of the season.

“Spencer has been doing well,” Damet said. “I think he is suffering as we do of conceding goals. It's never easy to be the last man in the back. He's been huge for us in terms of the build-up but also in making some important saves. Unfortunately, the statistics are not showing it, but he's been a big part for us so again, he needs to keep his head up and keep working.”