Coach: 'I've never experienced a crowd that is so positive' 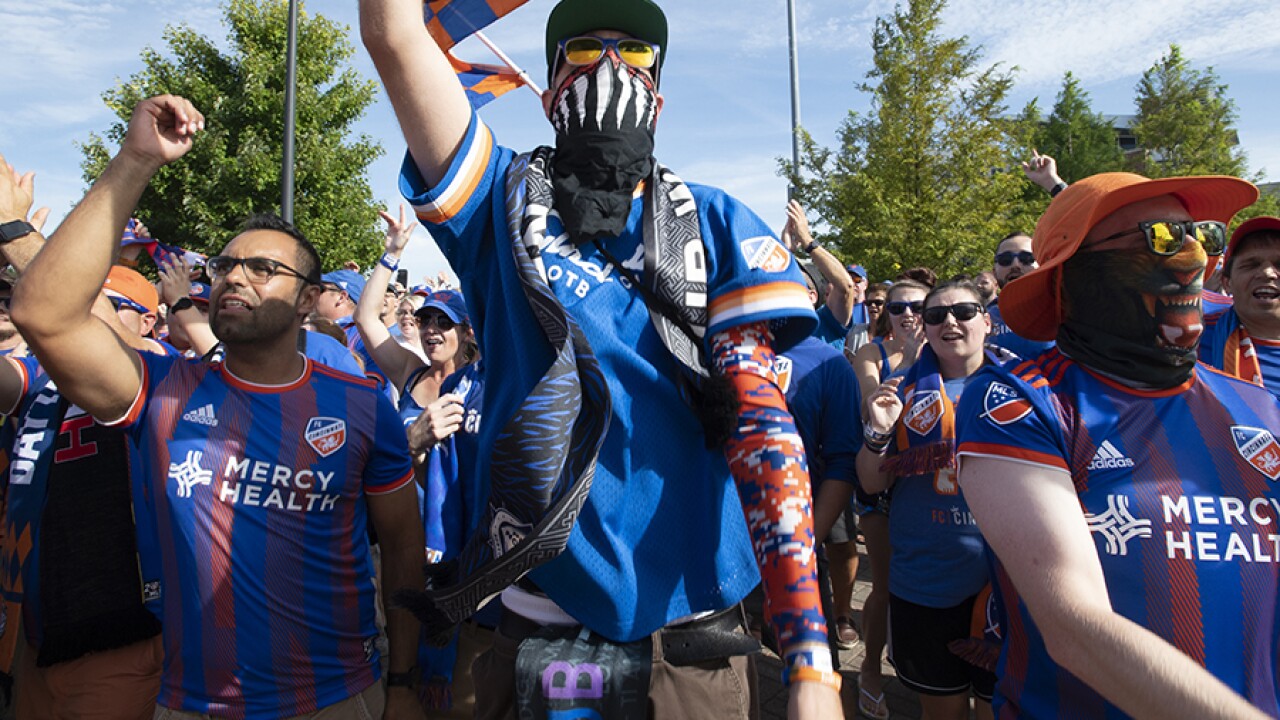 FC Cincinnati Fans rallied outside of Fifth Third Area next to the Bearcat statue after marching down West Charlton street for their soccer game against Columbus Crew SC Sunday August 25, 2019. Photo by Joseph Fuqua II for WCPO

CINCINNATI — FC Cincinnati was eliminated from the playoffs weeks ago, but that hasn’t kept fans from showing up for games.

The Orange and Blue is expecting a big crowd for the Sunday home finale of its inaugural Major League Soccer campaign, where the team will host an Orlando City SC team still fighting for a postseason berth.

And on “Fan Appreciation Night,” FC Cincinnati hopes to thank faithful supporters with a victory — something the team hasn’t accomplished at Nippert Stadium since July 6.

“The fans deserve it,” centerback Nick Hagglund said. “The people of Cincinnati deserve a win after a long season. We want nothing but to give them three points.”

Even the players and coaches have been surprised at the amount of support the struggling team has received through a 6-22-4 record that includes just three home wins. They will wrap up the season Oct. 6 at D.C. United and will finish the year ranked third for attendance.

Ok, #FCCincy fans... In light of “Fan Appreciation Night” this Sunday, I’m looking for a couple people to talk about why you have stayed faithful through this difficult season. Admittedly, I’m especially intrigued if you are a Bengals fan who booed them in Week 2 under new staff.

FC Cincinnati averages 27,442 fans a game, placing it below only Seattle and Atlanta. Both teams above them play in larger NFL stadiums and are playoff-bound. Portland ranks fourth with 25,218 fans per game, but that is Providence Park’s capacity.

“They’ve been great all year,” said midfielder Fatai Alashe, who witnessed similar crowds last year while finishing the 2018 season on loan with the team in USL. “Credit to them because you would expect they would stop coming, but they haven't. They've cheered for us no matter what. They've been positive all year, and that's something that's pretty special that we have here as a club.”

Hagglund has been a part of losing seasons elsewhere and witnessed interest dropping or even fans vocalizing their disappointment in those teams. That hasn’t been the case this year.

“I was telling a fan the other day, I wish I could stay after the game and sign everyone's autographs for hours after games because it's amazing, the support,” he said. “It makes me incredibly proud to be from Cincinnati to see. I've been part of losing seasons. My rookie year in Toronto, we were getting booed off the field, and not for one second has anyone thought to do that, so the support is incredible, and I can tell you the club will be successful and honor everything they've done, and we are just really proud to play for those guys.”

Two weeks ago Sunday on the other side of town, the Cincinnati Bengals were playing their home opener under new coach Zac Taylor, and the support was quite different. Half the stadium seemed to be wearing red in support of the visiting 49ers. It took just a little over two quarters before fans were booing the product on the field.

Cincinnati was down 31-10, a week after nearly pulling off what would have been a great opening win at Seattle. But this was a team that had made the coaching change fans had demanded, and the fans didn't give the Bengals two full weeks before letting their disgust show.

FC Cincinnati fans say there are distinct differences between the two organizations that make it easy to support one and not the other. They still have hope with FCC, and the fan experience with the club feels more like a community, many said.

Season ticketholder Clay Winstead has been a “lifelong suffering Cincinnati sports fan” and admitted he has occasionally felt depressed watching FCC this year. However, he has still gone to most of the games and hasn’t lost interest.

“With FCC, the first year has been bad, but they’ve shown signs they recognize the problem and are dealing with it,” said Winstead, who also is a member of Die Innenstadt supporters group. “The Bengals’ situation, they act like everything is fine. Ownership feels different.

“When FCC announced the hiring of a new GM, the way they said it very much kind of admitted fault. Jeff Berding in his own way kind of said, ‘I shouldn’t have been doing this. We need a better soccer mind handling the roster.’ … When they fired Alan Koch, I don’t know if he was fall guy or what but they held someone accountable and now have brought in a new coach people seem to like. … They made wrongs and are trying to fix it. The Bengals could have gotten rid of Marvin Lewis years ago, but they didn’t see a reason to until ticket sales dropped last year.”

Some fans also kept grounded expectations for this year, knowing FCC was an expansion team and had a short runway to prepare after getting accepted into MLS last May.

“I’m a Browns fan — I’ve seen much worse,” said 29-year-old Oliver Jay of Golf Manor. “Also, I was hopeful but had realistic expectations at the start of the season. Granted, I wasn’t expecting to struggle this much, but I am happy to see Berding and ownership notice something needed to be done quickly and do it rather than wait.”

New coach Ron Jans said the fan support for FCC had a lot to do with why he wanted to come to Cincinnati. The first game he watched live before accepting the job was one in which 26,276 fans showed up immediately following a 7-1 loss at Minnesota the week before, and FCC snapped a six-game losing streak that night against Houston for its last home win.

Jans joked that although it is his birthday on Sunday (he turns 61), he would like to be the one giving the fans a present with a great result.

“I've never seen fans being so positive when you meet them in the streets but also at the games,” Jans said. “I've never experienced a crowd that is so positive like ours. We want to give back. They give a lot to us. It was and is one of the reasons I like it here.”