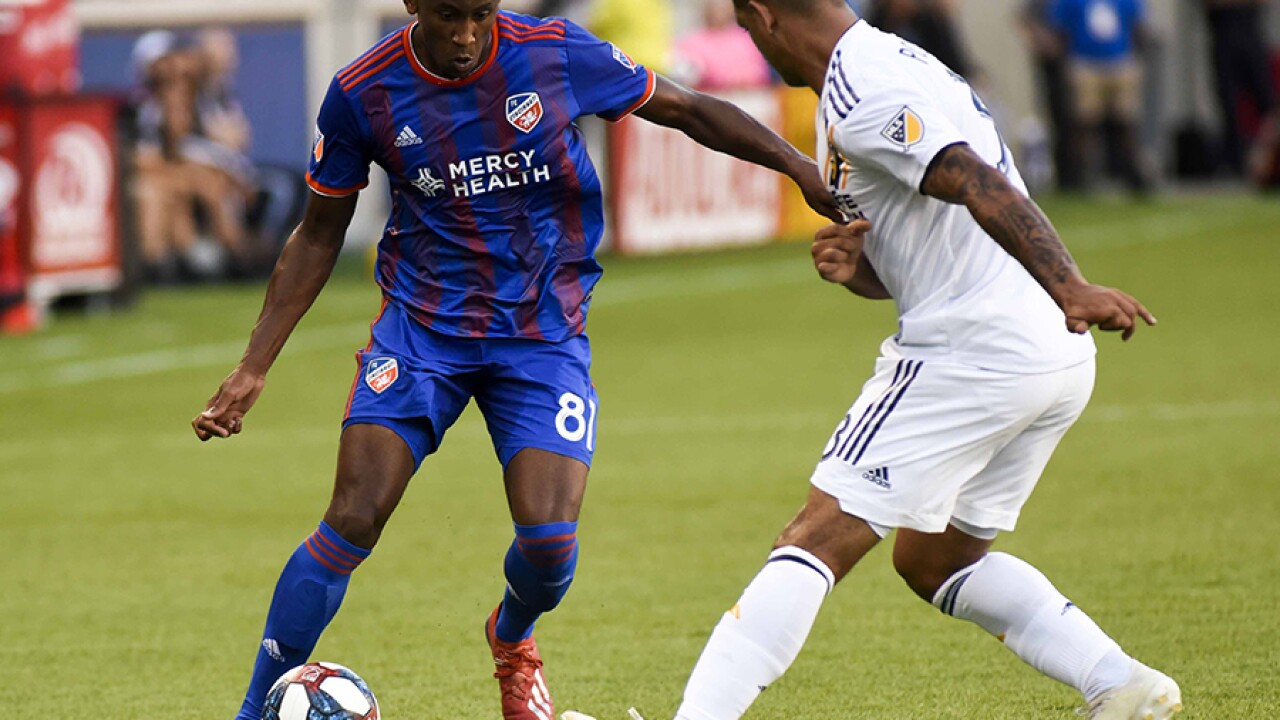 CINCINNATI — FC Cincinnati managed to stop the bleeding after falling into an early hole but couldn’t climb out of it.

L.A. Galaxy scored two goals in the first 15 minutes and that was the difference, as FCC suffered a 2-0 loss Saturday in front of a sellout crowd of 32,250 fans at Nippert Stadium.

FCC held the possession advantage at 64.7 percent for the game and managed 12 shots, but conceding goals early continues to be a problem to address as the Orange and Blue dropped their fifth straight league game.

“That’s the tough thing about this sport -- it's not like football or basketball,” goalkeeper Spencer Richey said. “It's not easy to score, so if you do concede early in games. Sometimes they score two, like tonight, and sometimes it could be one, but sometimes that's all you need to win the game. We have to do a better job of starting games earlier and giving ourselves a chance in the second half to get something out of the game.”

Here are three key points to take from the game:

FC Cincinnati looked lost defensively in the first 20 minutes, and L.A. took advantage to score twice in a three-minute span.

Emmanuel Boateng put away his first goal of the season, splitting FCC’s defense for a shot to the far post in the 12th minute. The second goal came in the 15th minute when Fatai Alashe’s attempt to clear floated across the box and Mathieu Deplagne and Nick Hagglund collided trying to hear it away, giving Alvarez an easy shot to bury.

“Lack of confidence at this point (is a problem),” FCC interim coach Yoann Damet. “We have a tough period, we know it. We still are focusing on ourselves, focusing on the process, but we need to get some confidence and unfortunately there are some moments like that (conceding early goals). That happened tonight. Unfortunately for us, to go 2-0 down after 15 minutes, it's all about the confidence.”

The Orange and Blue settled down shortly after that, but L.A. appeared to be on cruise control by then even with FCC controlling play. The hosts had 62 percent possession with 85.8 percent passing accuracy, yet managed no shots on goal on four attempts in the first half, compared to the Galaxy’s four. FCC had three shots on target on eight attempts in the second half.

Injuries and international call-up absences continue to present challenges for Damet when he’s putting together the lineup.

FCC came out with yet another different backline, utilizing Alashe – traditionally a midfielder -- at right back, joining Deplagne on the left and Justin Hoyte and Nick Hagglund at center back. Leo Bertone, making his first start since May 11, played in the midfield with Frankie Amaya and Victor Ulloa – Amaya serving as a center attacking mid.

Fanendo Adi also is back on the injured list after pulling his hamstring Wednesday in the U.S. Open Cup loss at St. Louis FC, and with Mattocks still on Jamaican national team duty, Damet gave rookie Rashawn Dally his first MLS start.

Cincinnati will be missing one more player next week at Minnesota, as Bertone picked up a fifth yellow card for the season and will be suspended for card accumulation.

“We do not have a big group,” Damet said. “We are facing a number of injuries. We are also facing suspension. Unfortunately, that's a big frustration tonight, especially considering the situation. When Bertone gets the card, I think there was a foul before it and the referee doesn't whistle the foul and straight after it, Bertone found the guy back and gets a yellow so that's unfortunate thing against us right now.”

Emmanuel Ledesma and Kekuta Manneh played on the wings in the 4-3-3 system with Dally serving as the center forward, a big role for a young player who just recently rejoined the first team after playing on loan in the USL Championship.

“Embracing adversity is also giving a chance to some players,” Damet said. “I think Rashawn did very well tonight. It's also a part of the process is developing young players. ... He embraced the opportunity, and I'm very happy with our young players.”

The sellout crowd can largely be attributed to the hype of Galaxy star Zlatan Ibrahimovic making the trip to Cincinnati, and he doesn’t shy away from taking credit for any attendance boosts opponents might see when he comes to town.

The prolific scorer – with an ego that draws just as much attention as his abilities – didn’t give much of a show, though. He had two shots on goal and one big flop at the end of the game when he didn’t get a pass he was looking for with an open lane in front of him. He sat on the ground watching for a bit before finally getting up. That was about all the entertainment he provided on this particular night.

At times teams can overcompensate for big-time players like Ibrahimovic, which could have attributed to FCC’s slow start as the defense tried to keep him from getting opportunities to show his scoring prowess. However, Richey thought the defense handled him well.

“He's definitely a player we spoke about throughout the week, but I don't think any more than we would a striker on another team,” Richey said. “With his name or not, he's one of the best strikers in the league. We know he has some strengths, especially in the air and things at the back post, that we kind of designated Nick to do a ton tonight, and I honestly thought he did a great job in the air, fought hard with him. I think sometimes those guys can draw attention to them, but I don’t think that was the cause of anything at the beginning.”