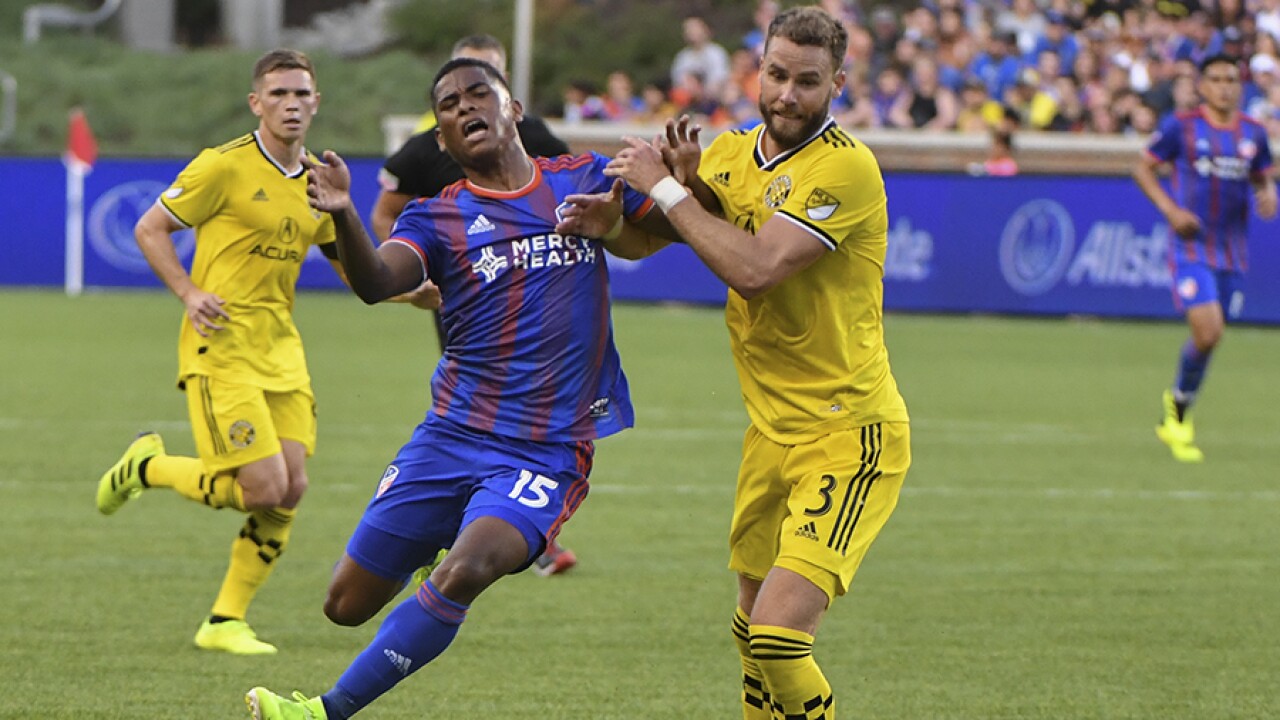 CINCINNATI — FC Cincinnati fell behind early in the second match of the “Hell is Real” derby with Columbus Crew SC, and by the time adjustments were made, it was too late.

Columbus took a three-goal lead into halftime, and the Orange and Blue only managed a consolation goal in the final few minutes, falling 3-1 in front of 30,611 fans Sunday at Nippert Stadium.

Crew forward Gyasi Zardes, the MLS Comeback Player of the Year in 2018, scored two goals in the first 33 minutes, and Luis Diaz added another tally just before halftime. Kekuta Manneh scored for FCC in the 89th minute off Emmanuel Ledesma’s assist.

The Orange and Blue drop to 5-19-3, and Columbus took four points out of a possible six in two matches against Cincinnati this season.

In the first meeting of these teams two weeks ago in Columbus, FCC had taken a 2-0 lead and ended up satisfied with a 2-2 draw after Columbus came back and had several late chances thwarted. This time Columbus took the early lead and never let Cincinnati in the game on FCC’s own field.

Columbus got on the board in the 22nd minute when Zardes beat center back Maikel van der Werff to a 50-50 ball in the midfield, dished the ball off to Pedro Santos and sprinted into the box for an open look off a curving cross from Luis Diaz, who was left open on the flank when Andrew Gutman missed a tackle on Santos.

Nine minutes later Zardes doubled the lead when he got behind the FCC defense for an open shot on a similar bending cross by Harrison Afful. And, just before half, the Crew sent home the dagger on a near-post shot by Diaz.

FCC looked like a different team in the second half, playing with more build-up out of the back and creating chances, but the game had already been decided.

“In the first half I didn't see a team,” Jans said. “I didn't see players doing the gameplan, and I don't know why. In the second half, we did much more building up, better in possession, creating chances, we could have scored maybe earlier and we scored in the end and I saw a team in the second half that was playing as a team. But, what was most important was they killed the game and they did a good job, Columbus did, in the first half. We had trouble winning the ball, putting the right pressure and with the speed of the attackers.”

Captain Kendall Waston said the players didn’t come out with the right attitude for whatever reason.

“We have to follow what he says, and if we would have followed what he said and things don't go our way, he would say another thing, but he was totally right,” Waston said. “We have to see ourselves and take the blame because we are the ones playing and not making the right decisions. We go on the field and try to make the best decisions to win, but we have to learn from this.”

Columbus was doing a lot of the damage down the right side to create opportunities for Zardes in the middle of the box, but while it seemed like the Crew were getting the best of Gutman, the problem actually stemmed from the Crew outnumbering FCC in the middle.

Gutman was pressing high as he was supposed to so when the center mids lost the ball, Columbus was able to take advantage down his side of the field. In the second half, Jans switched Victor Ulloa to a defensive midfielder role next to Caleb Stanko to make better matchups in the middle and the difference was instantly noticeable.

“We tried to play a little higher with Gutman, but if you don't press well and you lose the ball, there is a lot of space behind him,” Jans said. “During halftime we made a tactical change to put Victor Ulloa next to Caleb Stanko because he was too much along against two players from Columbus. Second balls, but also the passing, they were big trouble and then they played to the right side.”

Jans is still concerned by the number of goals conceded right before halftime (FCC has allowed seven goals in the 40th minute or beyond in the last 10 games), and will continue to address it.

“It is an issue, but we worked this week a lot on possession because when you play the ball up front too early, you lose it too much so we wanted to save energy but to me the first two goals were more important than the third one,” Jans said. “... But it has to improve.”

FC Cincinnati has dropped a lot of games this year, but being the rivalry game at home in an otherwise lost season (playoffs are out of the picture), Sunday’s match was the biggest one for the club and fans. The way FCC started the game, therefore, was probably the biggest letdown yet.

Players said the attitude and energy was completely different in the second half but no one could understand why it wasn’t that way in the first half. Even the ultra-positive Jans said he was “sick of this game” and “really disappointed.”

Despite the poor showing, both sides showed they still cared about getting a result and there were moments of intensity expected from a rivalry match. After FCC scored in the 89th minute (Ledesma’s assist to set up Manneh for the one home goal was a beautifully-threaded pass and the finish just as nice), there was a scuffle in the goal as Jonathan Mensah picked up the ball and held onto it as FCC tried to recover it and get play started again quickly.

Ulloa and Mensah ended up pushing and shoving and both were carded.

“We scored a goal and felt like we could get another one, so we wanted to get the ball out of the net and (Manseh) held the ball,” Manneh said. “He was wasting a bit of time. He's an experienced player, a smart player and he was killing time. But that's what derbies are all about. It's all about fight and intensity, and I think both teams brought that.”

The intensity just didn’t show in FCC’s play soon enough, and that was the difference.