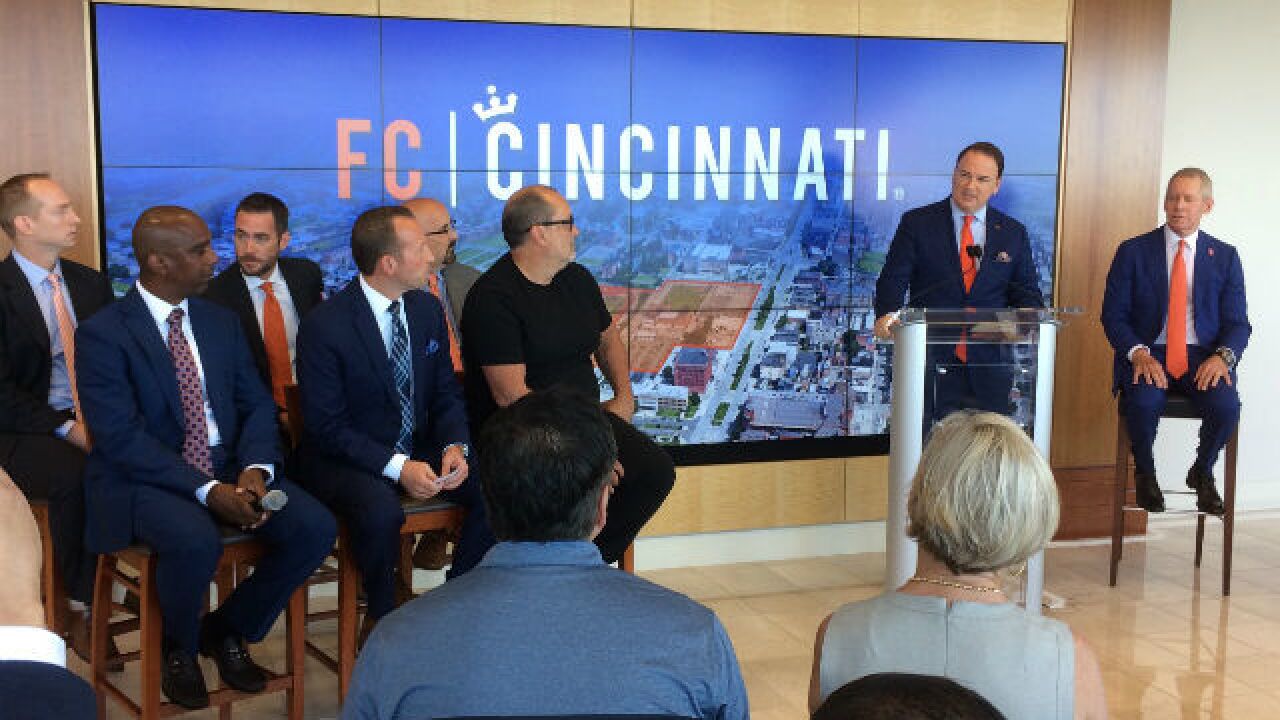 Copyright 2018 Scripps Media, Inc. All rights reserved. This material may not be published, broadcast, rewritten, or redistributed.
<p>FC Cincinnati President and General Manager Jeff Berding and CEO and prinicipal owner Carl Lindner III (at right) introduced their team of architects, builders and financiers for their new MLS stadium in the West End.</p>

Almost one year later, those plans are becoming a reality – albeit adjusted for the club’s secured site in the West End.

MLS awarded Cincinnati an expansion bid last month to begin play in 2019, and on Friday, FC Cincinnati laid out the details to its stadium plans, including announcing a timeline for construction and the partners who will build, finance and manage the facility.

“It feels real now,” club owner Carl Lindner III said. “This is when the fun begins.”

The club hopes to break ground on the site of Taft High School’s Stargel Stadium – which will be rebuilt across the street – by the end of this year.  Officials expect to begin seeing foundations by the second quarter of 2019, celebrate a “topping out” by the end of 2020 and open the facility for play in 2021.

FC Cincinnati will spend its first two MLS seasons at the University of Cincinnati’s Nippert Stadium, where it currently plays in the United Soccer League, averaging almost 25,000 fans a game as a third-year club.

“When we first had the notion of bringing professional soccer to Cincinnati, we would hope a day like this would follow and the opportunity to announce a stadium project that would be an integral part of our community for generations to come,” Lindner said. “... It's been a winding road to reach this point, but we’re excited about what's going to be our new home in 2021.

"Our family has had a chance to be a part of many projects throughout our region, though I have to tell you, I'm ecstatic about a new MLS stadium for Cincinnati. It's going to be awesome.”

The Machete Group will manage all phases of the stadium, Turner Construction will serve as the leading builder, while partnering with Jostin Construction, and the project will be financed by US Bank.

Turner has roots in Cincinnati since 1903 and is one of the nation’s largest sports builders with more than 450 stadium projects, including nearly half of MLS stadiums.

“We know this group we’ve assembled will exceed our goals and expectations to create a stadium that represents Cincinnati proudly on the world stage,” Lindner said. “The West End is a vibrant, exciting neighborhood. One of the key goals of this project is also to erect a tribute to the West End with respect to its history, its legacy and its future.

“Our partners on this project all have experience here in Cincinnati, developing projects that already have created memories and significant life moments for our community. With the FC Cincinnati stadium, we'll look to leave a legacy in Cincinnati and build a home that's going to leave to a lot more memories and life touchpoints for many years to come for our fans, our region and our club.”

Architect Dan Meis, who designed the NFL Cincinnati Bengals’ Paul Brown Stadium, will continue working with the club on the designs, building off initial plans that were unveiled last June. However, those designs were specifically for the former Newport, Kentucky, site that was being considered along the banks of the Ohio River, so Meis said he is “starting over.” He hopes to have the final designs complete in the next “several weeks.”

Meis plans to implement some of the initial principals of the Newport designs, including the use of fan plazas and open concept that allows the community to feel connected to the stadium. The most notable change, he said, will be a toning down of the glowing effect created by the ETFE material and use of LED lighting in the original plans.

“The club liked those early renderings from how spectacular it is and how you can control it and kind of turn the building on, so we are looking at the material still,” Meis said. “Probably in a different way and maybe not quite as over the top as that earlier design was because that was on an empty site with nothing really around it, so it was more of an object. There are some principals in that design that we're going to bring to this, but we're going to be very conscious of the community and not overpower it.”

As for the size of the $250-million stadium, FC Cincinnati President and General Manager Jeff Berding said that is still up in the air. The original idea of 21,000 seats is probably the floor, he said, and the ceiling is around 30,000.

“You build what you can afford,” Berding said. “Right now, we are averaging about 25,000 fans, so 21,000 is probably the floor and 30,000 is probably the ceiling. There’s also value in scarcity, so you don’t want to build too big. We’re working with Turner on the costs of the project, and then we’ll see where we end up.