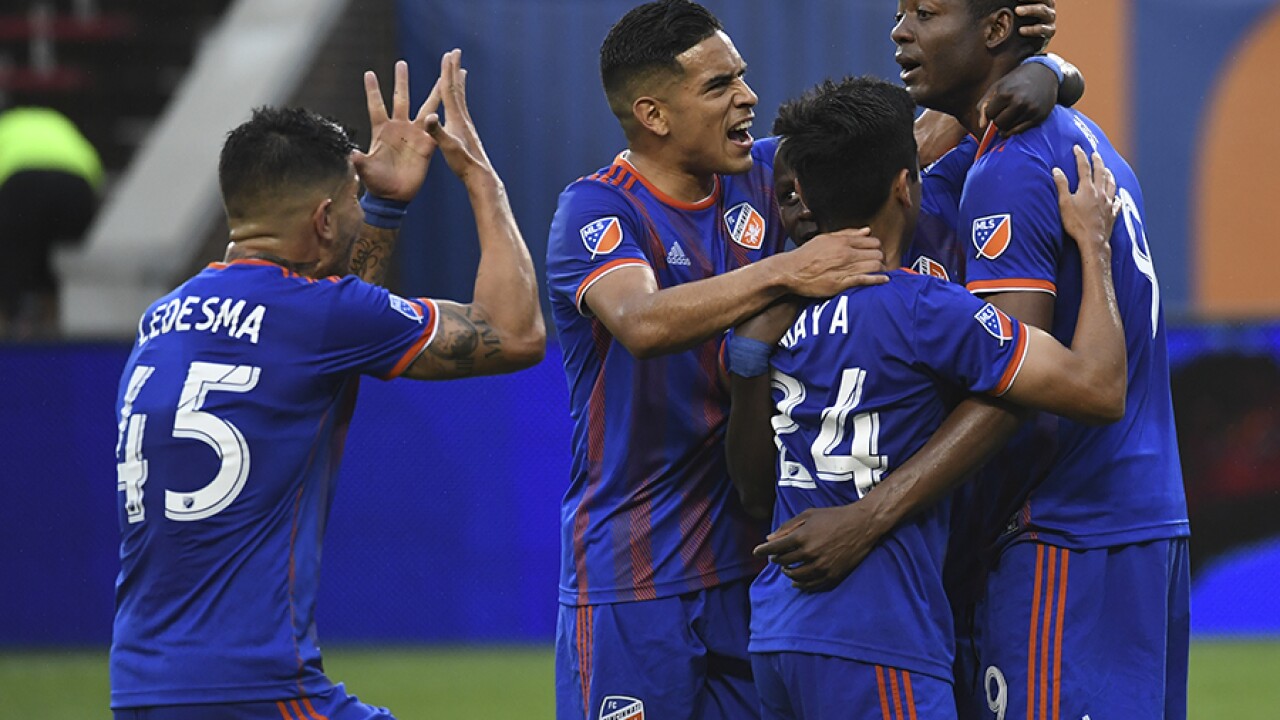 FC Cincinnati’s inaugural Major League Soccer season seems to be lost with the playoff picture far from reach, but the Orange and Blue now have something else to look forward to: A potential run through the Lamar Hunt U.S. Open Cup.

Cincinnati beat former United Soccer League rival Louisville City SC, 2-1, in extra time of a fourth-round game Wednesday at Nippert Stadium. The Orange and Blue, who snapped a four-game losing streak, advance to face an undetermined opponent next week in the Round of 16. The draw is set to take place Thursday morning.

Kekuta Manneh gave FCC new life with the game-winning goal in the 104th minute and celebrated by flinging off his shirt and running toward the fans on the east side of the stadium. FCC held Louisville City off the board another 16-plus minutes to secure the victory.

“It was important for the group,” interim coach Yoann Damet said. “We spoke about using a moment like that to turn the season around. The guys are very happy.

“I'm very happy for them,” Damet added. “They work hard week in and week out. They've been putting in the work every week and we haven't been rewarded. We had ups and downs in the past weeks, and tonight, even if it wasn't pretty, we showed a lot of character to get back and to get that win.”

Fanendo Adi buried a tough shot to put FCC on the board first Wednesday, but, unlike Manneh, he did not celebrate his first goal since September. As teammates circled around him, he just looked relieved.

FCC’s top-paid player had been struggling to finish opportunities this season and seemed to be pressing for that first goal. However, he took the ball away on a slip-up by Paco Craig at the corner of the penalty box, dribbled toward goalkeeper Chris Hubbard and tucked a shot under Hubbard’s outstretched leg to score from a difficult angle.

The strike gave the Orange and Blue the first lead in the 23rd minute. Although it didn’t last long, it was a memorable moment for Adi and his club.

“I know what it is for a center forward,” Damet said. “You want to score goals, you want to help your team. He was creating opportunities the past games and unfortunately wasn't able to find the back of the net. I'm happy tonight he was able to score. It was good for his confidence.”

Unfortunately, Louisville City also was able to take advantage of a mistake on FCC’s part as Victor Ulloa gave away the ball in the defensive third to set up the visitors’ equalizer. Magnus Rasmussen collected the ball near the end line and crossed it into Lucky Mkosana, who one-touched it past Przemyslaw Tytón.

The score would remain level until late into the first period of extra time.

FCC has a history of playing Open Cup games that go to extra time. In their sixth Cup game to do so, they found a familiar spark and pulled ahead in the 104th minute.

Manneh crashed toward the back post to head home a beautiful cross from Emmanuel Ledesma, putting FCC ahead 2-1 in the first of two extra-time periods. The play began with Eric Alexander changing direction on the left flank near midfield and sending a backward pass to Tytón, who found Ledesma on a long delivery down the right side. Ledesma headed the ball to the empty corner and made his cross from there.

Tytón and the FCC defense held Louisville off the board for the remainder, and the international goalkeeper who has been playing behind Spencer Richey collected his first win with FCC.

“We as a team needed (the win), because wining is a confidence so we needed to get back the confidence and to get back in control and just believe in ourselves,” Tyton said. “We do a good job and just need points.”

Cincinnati had won three of the previous five games to go to extra time, including beating the AFC Cleveland and the Chicago Fire (in penalty kicks) during the magical run to the 2017 semifinals and a 4-1 win over Detroit City FC last year in the third round.

FCC lost to Minnesota United in penalties last year in the fourth round, and the 2017 run ended in extra time against New York Red Bulls.

For better or worse

FCC players and staff knew what this match meant to the fans (and probably the front office) who didn’t want to witness a loss to a hated United Soccer League rival, but the Orange and Blue couldn’t have used this game to rotate or rest players if they wanted to.

They were only able to dress 16 players Wednesday. Several players were unavailable in addition to the four who are gone for the Gold Cup: Jamaica players Darren Mattocks and Alvas Powell and Costa Ricans Kendall Waston and Allan Cruz.

Greg Garza and Roland Lamah are both dealing with injuries — a calf and a hamstring, respectively. Kenny Saief is back home in Israel as FCCworks to terminate his loan with Belgium’s Anderlecht. Leonardo Bertone is on a vacation the club agreed to allow during the international break back when he signed (coming from Europe this offseason, he’s been playing a full year), and rookie Tommy McCabe couldn’t play because he is Cup-tied to Charlotte, where he previously played on loan.

Players who were with FCC in the USL knew the significance of beating Louisville, even if it wasn’t necessarily a pretty performance.

“It's something special because they like to talk on social media, and they talk too much so now it's time to say, 'Go back home, and don't talk too much,’” said Ledesma, who was the USL Player of the Year in 2018.

Beating Louisville wasn’t the only thing special about Wednesday.

In the midst of Cincinnati’s struggles in league play, the Open Cup provided a new focus, the chance to enjoy a little success with a clean slate in the tournament, and the Orange and Blue delivered. For better or worse, the short-sided FCC now adds another game to prepare for, as it will play in the Round of 16 middle of next week. Cincinnati then hosts L.A. Galaxy on June 22 in league play.

“Maybe it's a turn in our season because we have a series of losses recently so it breaks the (losing streak) and now maybe make a run for the championship,” defender Mathieu Deplagne said. “It's good to keep moving and take the opportunity to get the win.”