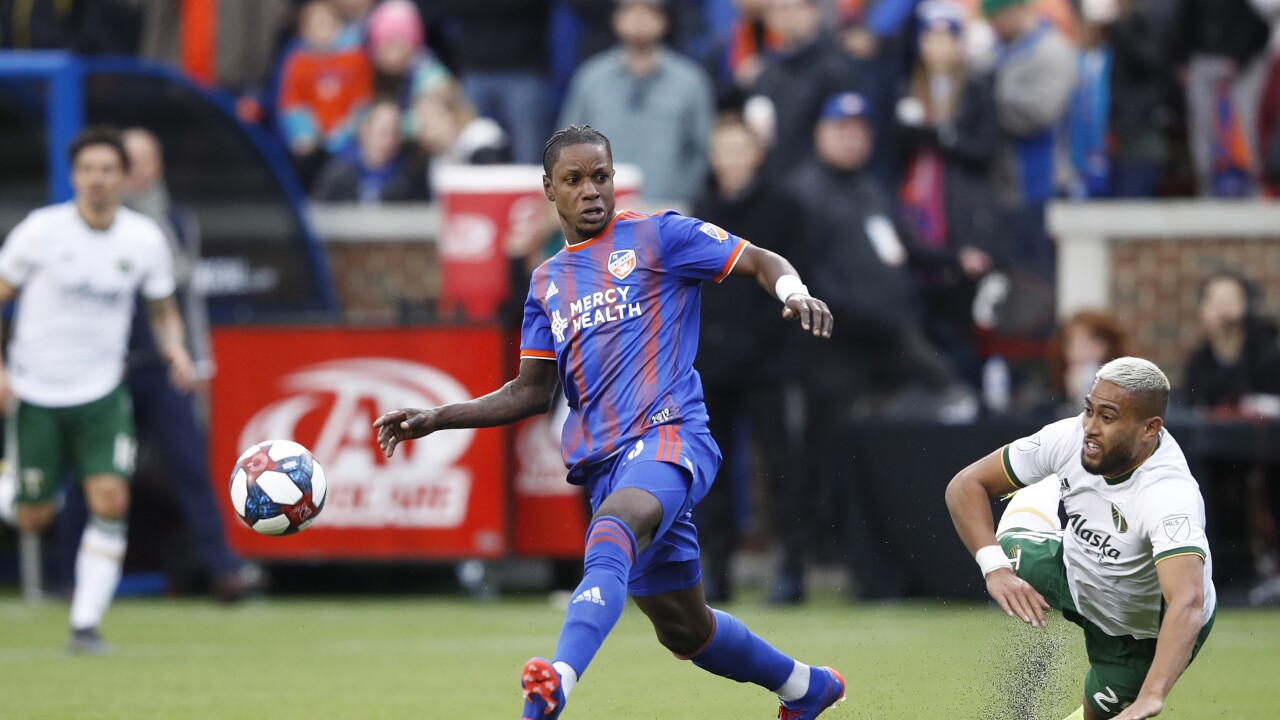 Joe Robbins | Getty Images
Darren Mattocks of FC Cincinnati controls the ball against Bill Tuiloma of the Portland Timbers in the second half at Nippert Stadium on March 17, 2019 in Cincinnati, Ohio. FC Cincinnati won its inaugural home match 3-0.

CINCINNATI — FC Cincinnati coach Ron Jans went into the preseason with three main objectives he wanted to accomplish in terms of tactics, conditioning and team chemistry, but now he’s about to get his first real look at how far the group has come a little over a week into its training.

The Orange and Blue will open its six-game preseason schedule Wednesday against USL Championship side Phoenix Rising FC at Kino Sports Complex in Tucson, Arizona. They arrived in Arizona on Jan. 19 and will play two more exhibition games before departing Feb. 6 to finish the preseason in Florida.

FC Cincinnati had its first intra-squad scrimmage on Saturday, playing four 12-minute periods in which there was plenty of rotation and systematic changes. Four days later, Jans will begin to see what combinations work best against an actual opponent.

“We want to gain chemistry in the group, work on the systems we want to apply throughout the season and, of course, get results,” said FC Cincinnati defender Saad Abdul-Salaam, a newcomer to the team this year.

Jans said Saturday’s intra-squad scrimmage was useful for seeing some of the work the team put in during the week on display in a game-like situation, but he will get a better reading when the Orange and Blue puts it up against a new opponent.

One of the things he emphasized during the first week of training was practicing several tactical ways of playing, in and out of possession, so players know how to execute Jans’ style no matter how the opponent lines up to defend and attack. Returning players already have a feel for what he expects but changes in the roster led to different skill sets that create need for adjustments.

During the intrasquad scrimmage, Jans changed the system each period so the group was seeing different looks each time. This week, the intensity will be raised another level with two opponents on the schedule. The Orange and Blue will face MLS side Sporting Kansas City on Saturday.

Jans’ other objectives this preseason include physically preparing the players and developing team chemistry. Going away for training is especially helpful for the latter, as players are rooming together, dining together and spending free time together, in addition to getting a feel for how each other plays during practices. One day last week, the team broke into different units by position and went to dinner together in small groups. On Sunday, the team had a day off and went exploring together.

FC Cincinnati will have 29 practice sessions this preseason in addition to the six friendlies and numerous team meetings. Players will be home for two days between the Arizona and Florida trips, and they will return with just one week in Cincinnati to prepare for the regular-season opener March 1 at the New York Red Bulls.

“For me, being a great team is very important for the result, because maybe we don't have the biggest money and the best players yet, but we can be the best team in working together and giving everything for each other,” Jans said.

Although there is still much work to be done, Jans already is feeling more comfortable going into the first preseason game than he did his first match with the team last year. He was announced as head coach in August and had just five days to try to settle in before the team’s next game that weekend.

Now he is more familiar with the players and how the staff works together. This week will be a good test for how well the players know one another.

Jans said he will continue rotating players for the first couple preseason games before his regular-season lineup starts to take shape.

“They get their moments in friendly games, and the more the first game is coming, you will see there will be less changes and then you can see more of the shape of the starting members,” Jans said.

Preseason games also provide a chance to build some momentum going into the season, if all goes well. Jans said the group won’t be fully developed in just six weeks, but neither will its opponents.
FC Cincinnati is looking to turn the page on last year’s disappointing 6-22-6 finish.

“We were all there. I came a little later, but I also feel responsible for part of the results, of course, but it's so easy to do better, and this season we want to make a step in every detail.”