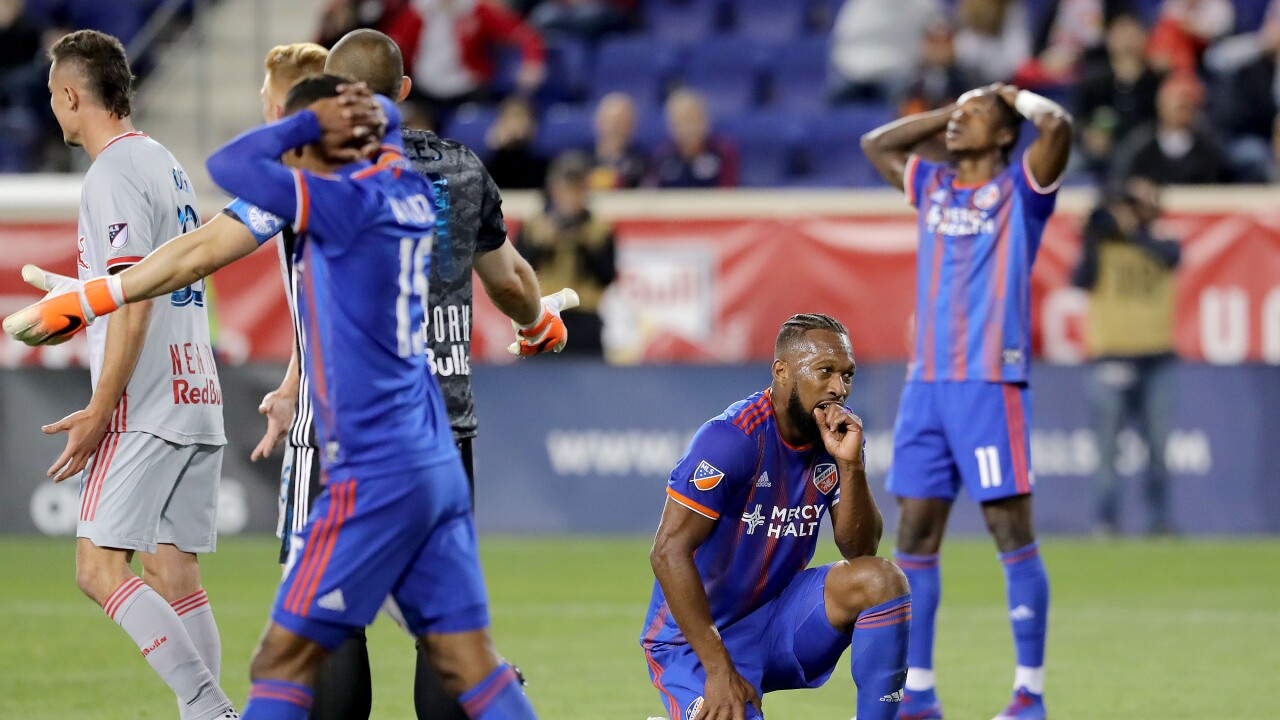 CINCINNATI — The last time FC Cincinnati lost players to national team duties, the big question was where the offense was going to come from without Darren Mattocks available to replace then-injured Fanendo Adi.

Now Mattocks, defenders Kendall Waston and Alvas Powell and midfielder Allan Cruz have left for a second time this season because of international call-ups, and it seems that just putting together a full lineup card will be difficult.

FCC finally has Adi back to full strength, but left back Greg Garza and midfielder Kenny Saief still are nursing calf and hamstring injuries, respectively. There were just 17 field players participating in the first 15 minutes of practice Tuesday -- the portion open to the media -- ahead of Thursday’s league game at New York City FC.

Mattocks and Powell are with the Jamaican national team, which plays Team USA in a Gold Cup tune-up Thursday in Washington, D.C., and Waston and Cruz are with Costa Rica preparing for the tournament run as well.

If there is any positive to take from it, Damet said the smaller group makes it “easier to reinforce the message” he is trying to instill as interim manager. Damet has switched to a possession-based style building up from the back out of a 4-3-3, and he is emphasizing a more positive mentality in the locker room.

Having fewer players at training and adjusting the lineup to account for absences theoretically create challenges for the chemistry-building process, but FCC will continue to plug away just the same.

“We're hoping to create an identity that anyone can step in and do the exact same job as the guys before them,” center back Nick Hagglund said. “Obviously, we will miss those guys and miss their energy in practice, but we have the guys to step up and make a difference.”

FCC is trying to end a three-game losing streak before taking its own break from league play. Cincinnati hosts Louisville City in the U.S. Open Cup on June 12 and then doesn’t play again until June 22.

Ending the skid is no small task with the lighter roster, but just like when Mattocks, Waston, Powell and Cruz were gone in late March, the team is focusing on preparing others for opportunities they have been waiting for, either on the bench or while not even earning a spot on the game day roster.

“It's difficult because, obviously, to lose four players in any situation, whether it's to injury or international duties, is tough,” defender Justin Hoyte said. “It will be challenging, but those players are training every day and there are people who haven't had a chance to start a game who will be in the squad, and it's a challenge for them to step up, and I'm sure they will be more than ready and capable of doing the job. This is what some players have been waiting for, and it's a great opportunity and I'm sure whoever steps in will know the job required of them and they will be more than ready to do the job for the team.”

Hoyte is one player that has stepped into a different role with Waston gone. The fellow center back earned the captain’s armband for Saturday’s loss at Colorado, a game Waston missed because of yellow card accumulation.

Serving as captain is a role that puts extra responsibility on a player to keep spirits up and encourage teammates, but Hoyte said as a veteran he tries to do that anyway. That role will be especially important with rookies Tommy McCabe and Reshawn Dally potentially both on the bench for FCC.

Both players were recently recalled from USL loans and are looking for their MLS debuts. Dally was on the bench for the May 25 loss to New York Red Bulls, but neither he nor McCabe made the game day roster at Colorado last weekend. They were both among the group of 17 field players training Thursday, and FCC likely will need them as long as players are gone. The Gold Cup final is July 7.

“They just need to keep believing in what we are doing,” Waston said before leaving town last week. “Faith is the last thing we can give away. We have to continue having faith and sooner or later the hard work will pay off.”