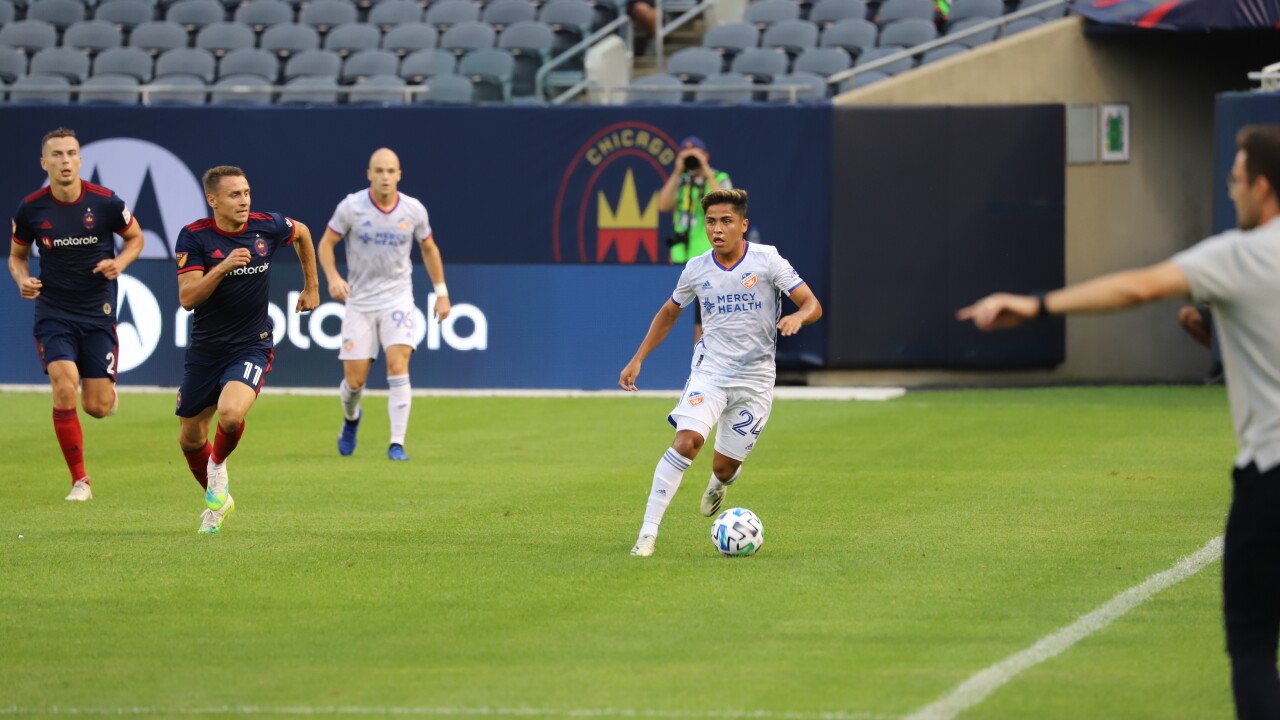 CHICAGO — So much for carrying momentum into the Hell is Real derby this weekend.

FC Cincinnati’s three-game league winning streak crashed to an end Tuesday with a 3-0 loss on the road against Chicago Fire FC at Soldier Field.

Now, the Orange and Blue (2-4-1) seek to bounce back against the top team in the Eastern Conference standings, as Columbus Crew (5-1-1) come to Nippert Stadium on Saturday. The Crew handed Cincinnati a 4-0 loss in the MLS is Back Tournament opener July 11, sparking change in Jaap Stam’s system that proved successful until Tuesday.

Cincinnati gave up two fantastic goals in the first 10 minutes and left much to be desired for a defense that hadn’t allowed a goal in 270 minutes of regular-season action entering the match. A goal surrendered to Portland in the MLS is Back Tournament Round of 16 game didn’t count in the statistics, as only the group stage games mattered in the season standings.

Here are three takeaways from the loss in Chicago:

Chicago scored two incredible goals early, but FC Cincinnati was guilty of giving the opponent too much space in the midfield and inside the box.

The first goal came in the second minute when Gaston Giminez sent a long pass into the penalty area for Fabian Herbers, who caught Cincinnati’s defense flat-footed and broke free to finish on a volley. The sideline official lifted his flag to signal offside, but after it went to review, head official Elton Garcia awarded the goal.

In the 10th minute, Chicago again took advantage of space with another long ball into the box to set up the second goal. Przemyslaw Frankowski ran onto it and split Tom Pettersson and Andrew Gutman to drop a pass back to Ignacio Aliseda, but Aliseda’s shot deflected off an FC Cincinnati defender and landed right in front of Álvaro Medrán to run onto for a rocket past Przemyslaw Tyton.

Tyton came up with a huge save six minutes later to prevent another similar chance from going in, and the score held until the second half. Chicago sealed the game with a goal by Aliseda in the 67th minute, after he was left open near the penalty spot for an easy finish.

FCC had posted three straight clean sheets in league play, while Chicago was coming off three straight losses. The Fire had managed just four goals through the first six league games but had ranked in a tie for fifth in the league for most chances created.

“When you concede two goals that early, then you need to chase it,” FC Cincinnati coach Jaap Stam said. “That makes it difficult. ... That gets the players into a certain mindset as well, which is not all the time positive, and you need to stick in there because you don't want to concede anymore and you're always looking for that moment to come out and hopefully score a goal yourself. … (In the second half) we were more lively, but ... after the three it becomes more difficult. They want to defend a bit more, and we couldn't score.”

The offense wasn’t exactly doing its part either, especially during the first half when FC Cincinnati managed just one shot into the stands. They adjusted better in the second half, pressing more to gain possession, but still couldn’t get anything out of it.

FC Cincinnati, which traveled by charter flight Tuesday morning, finished with eight shots and only one on target, giving Chicago goalkeeper Bobby Shuttleworth a light workload in his second start of the season since replacing injured veteran Kenneth Krohmholm, who suffered an ACL tear during practice earlier this month.

Star forward Jurgen Locadia was unusually quiet, as he didn’t get a single shot off in 74 minutes before Brandon Vazquez replaced him. Yuya Kubo was the only player with multiple attempts, finishing with two shots.

“It's frustrating,” midfielder Frankie Amaya said when asked about the lack of chances on goal. “Sometimes you're not going to play the way you want to, but at the end of the day it's about the result. We have to play better, and we've got to wake up from the beginning. It happened the last time against D.C. United. The first 25 minutes were pretty awful, but today it was bad too and we let in two goals and they made us pay for it.”

With the loss, FC Cincinnati (2-4-1) dropped from seventh in the Eastern Conference standings to 10th with seven points – which would still be good enough for a playoff spot if the league moves forward with plans for the top 10 teams in the East to advance.

But with the Crew (5-1-1) up next with little turnaround time, Cincinnati will have to correct mistakes quickly and be prepared for what looks to be an even greater challenge Saturday. Columbus leads the conference with 16 points, scoring 12 goals and allowing just two. FC Cincinnati has scored six goals and allowed 12 – seven of those goals coming in two games.

“We can be more aggressive, we can find a lot of things we could do better,” center back Kendall Waston said. “When you lose, you always find a lot of negative things. But now, I think learning from today is going to help us especially because next game we have our game against our rival Columbus. It will be a nice game that hopefully we can perform well, be aggressive and try to win that game.”