FCC faces New York next in MLS is Back Tournament 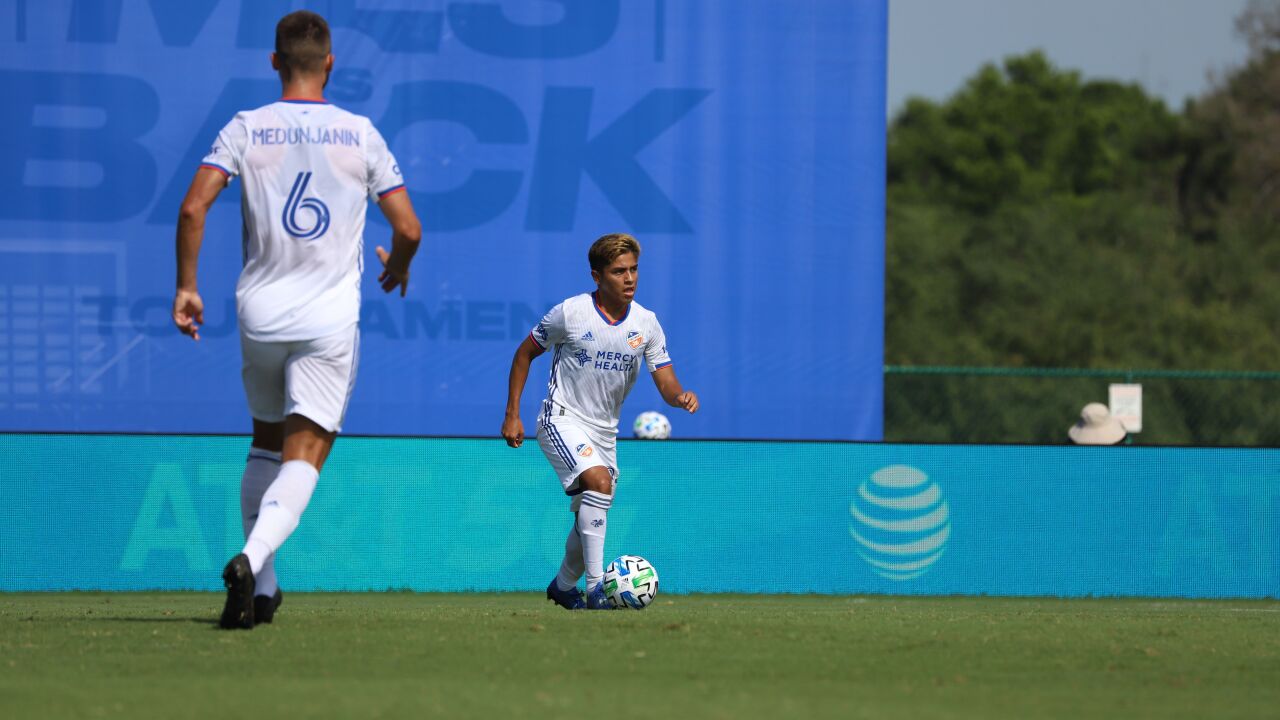 Copyright 2020 Scripps Media, Inc. All rights reserved. This material may not be published, broadcast, rewritten, or redistributed.
Courtesy FC Cincinnati
Frankie Amaya dribbles downfield during an MLS is Back Tournament game against Atlanta United, July 16, 2020.

KISSIMMEE, Fla. — FC Cincinnati needed at least a draw Thursday to keep alive its chances of advancing in the MLS is Back Tournament, but the Orange and Blue went a step further to earn their first win of the season and three massive points in the Group E standings.

Midfielder Frankie Amaya scored his first career goal in the 76th minute to lift Cincinnati to a 1-0 win over Atlanta United on Thursday morning at the ESPN Wide World of Sports complex in Kissimmee. The win is the first for FCC since September, the first in just two games under new coach Jaap Stam, and it keeps the second-year club among the top three in the group while Atlanta faces potential elimination as the lone team in the group without any points.

Cincinnati was coming off a 4-0 rout at the hands of rival Columbus Crew SC on Saturday, which makes a wild card difficult to obtain because of the now minus-three goal differential. The Crew are set to meet New York Red Bulls late Thursday night, and Cincinnati plays New York on Wednesday.

FC Cincinnati switched to a 3-5-2 to take a more defensive approach against one of the top teams in the league. But when Atlanta midfielder Jake Mulraney received a second yellow card and was sent off in the 26th minute, the Orange and Blue did not immediately adjust to the man-up opportunity as some might have expected.

Instead, FCC maintained its defensive shape and as coach Jaap Stam described it, the team remained patient in looking for chances to attack. The Orange and Blue finished with 12 shots, three on target, compared to Atlanta’s eight shots, three that Przemyslaw Tyton saved.

“If you play against one of the best teams in the league, you cannot think ‘Okay, we need to press high and we need to have a lot more possession or we need to create at least 10 chances,’” Stam said, defending the patience in attacking. “That’s never going to happen in soccer. So, in our setup, I think we did it very well. Eventually, when you play against 10 men, then yeah, you can keep the ball a little bit longer because they are going to be dropping in, they don’t want to give away spaces for us to run in or to play these balls through, and we did that very well. We created opportunities.”

In the end, it all worked out, but the strategy could have backfired quickly had the Video Assistant Referee (VAR) not wiped away a penalty kick opportunity for Atlanta in stoppage time just before halftime. Maikel van der Werff had taken Ezequiel Barco down in the box, but VAR ruled he was offsides receiving the ball on a header just before that.

Pity Martinez was lining up ready to take the penalty, and as FCC has shown difficulty coming back after conceding first, that could have changed the game right there.

“If we create one and we score one and we don't concede opportunities we still win 1-nil so that's enough for me, to be honest,” Stam said.

2. “Best goal of the tournament”

Fortunately for FCC, the patient approach finally paid off when Adrien Regattin dished a pass to Amaya, who was positioned well in front of Jeff Larentowicz to curl a beauty of a shot into the net. The strike from distance was just out of reach for Atlanta goalkeeper Brad Guzan and gave Amaya his first MLS goal four games into his second season after becoming the No. 1 overall draft pick in 2019.

“It was my first goal in like 27 games,” Amaya said. “I was getting a little impatient, but I got my first goal and I’m very excited. All glory to God. But I’m more excited that we got a win and staying in this tournament and competing.”

Asked in the post-game press conference if he thought the goal was the best of the tournament so far, Amaya was interrupted by center back Kendall Waston insisting it was. Amaya described it as “a good goal, an important goal for sure.”

Amaya has quickly gained the confidence of Stam. There was widespread belief the addition of Siem de Jong at the attacking center midfield position would crowd Amaya out, as de Jong arrived after the first two games in March just before COVID-19 shutdowns. Amaya still started Saturday with de Jong instead replacing Allan Cruz, and his role only increased Thursday with de Jong and Cruz out with precautionary injuries.

“After the first game, he was already one of the best players on the pitch, and today he was very decisive for us as well in scoring his first goal,” Stam said. “He's got the ability to improve a lot more and he's already doing well. The opposition and other teams are talking about him as well. We know that. You know, he's an interesting player, and he's got a lot of qualities.”

While it looked like the Orange and Blue were playing for the draw, the three points gained sets them up for an important Group E finale against New York, a team that beat them 3-1 in the season opener March 1. The top two teams in each of the six groups, plus the four next best teams advance to the Round of 16 knockout stage.

Coming off such a disappointing loss Saturday, the result Thursday also was crucial for building confidence.

“Phew, it was a long time we don't win, so it's a great feeling,” Waston said. “It impacts the group in a positive way in that we are going to continue in this mentality, continue what we are believing and knowing that putting in the hard work, sometimes things aren't going your way but sooner or later you are going to get your results, so keeping that mindset to be focused, to be patient and to believe in what we are doing.”

FCC’s last win came Sept. 14, 1-0, against Montreal Impact, a period of time extended by a fourth-month layoff because of the COVID-19 pandemic.