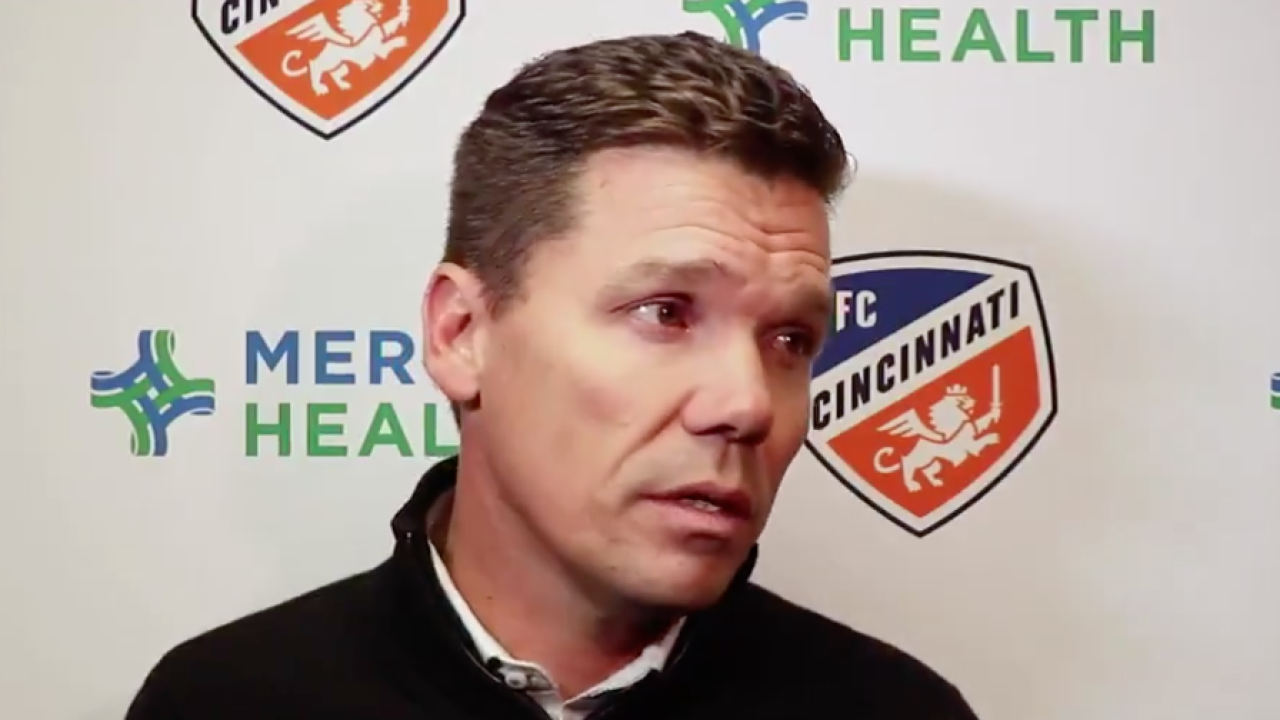 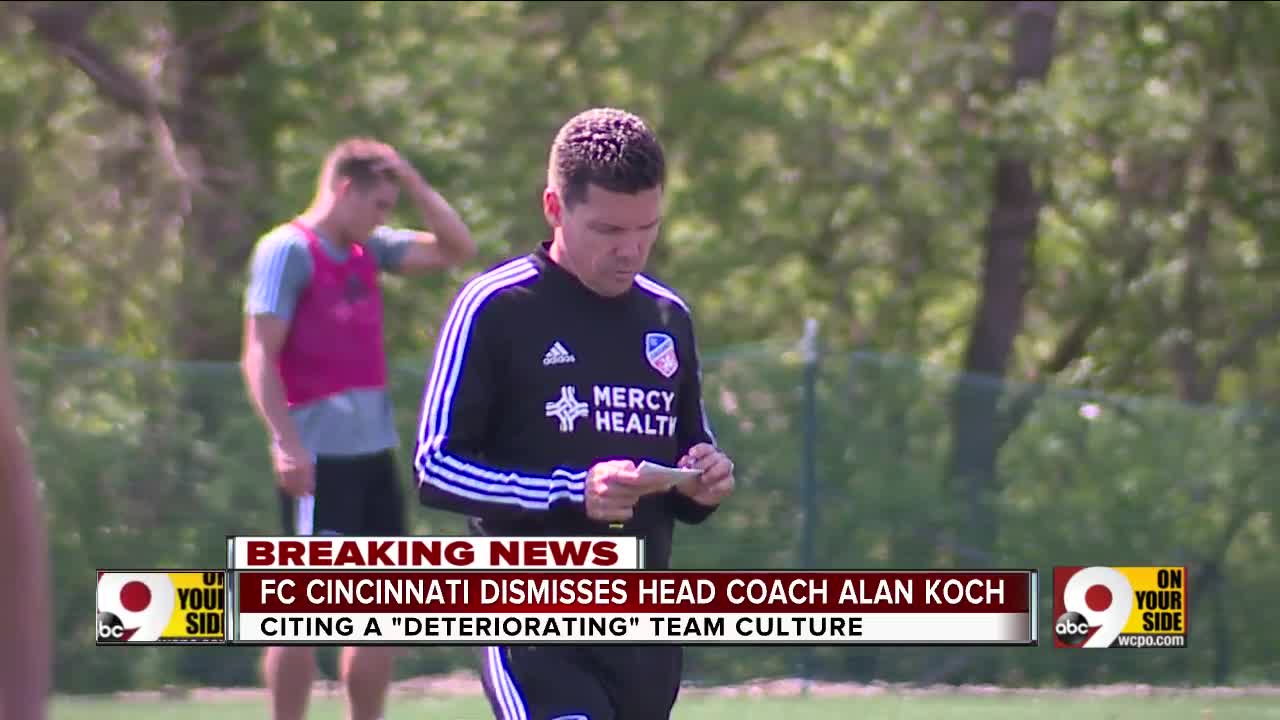 CINCINNATI — FC Cincinnati relieved head coach Alan Koch of his duties Tuesday, but the writing appeared to be on the wall in recent weeks.

Club president and general manager Jeff Berding in a press release cited a deterioration in the team culture as the main reason for the firing. That became apparent when Koch began commenting on the need for new players during recent post-game interviews and when a handful of players began making public comments to the media over the last two weeks about the team’s “lack of identity” amid on-field struggles.

Frustration has been mounting while the Orange and Blue (2-7-2) have lost five straight games and six of their last seven. They haven’t scored a goal from open play in more than a month, a stretch that spans more than 600 minutes of competition, and the last goal came on a penalty kick April 7 in a 1-1 draw with Sporting Kansas City.

“After a series of recent issues and a team culture that had deteriorated, we determined that it’s time to make a change to return a club-centered focus to the team,” Berding said in a press conference Tuesday, reading from a statement he had prepared. “This decision is not driven by recent game results themselves, but rather the underpinnings that have led to those results. We have not come close to maximizing the talent we have in the dressing room this year, nor have we seen a foundation being built that will set us up for success this year and into next year. Our whole locker room is committed to our club goal of earning an MLS postseason bid, and we need to put them in the best position to do so.”

Koch had stressed the need to “trust the process” and had defended the players chosen for his roster up until the team’s three-game road trip last week brought another trio of losses. Following a 2-0 defeat against a Philadelphia Union lineup of backups May 1, Koch finally lamented he needed more attacking players. He reiterated that Saturday after a 1-0 loss at San Jose.

That likely didn’t sit well with some of the current players on the roster, though forward Fanendo Adi had said the same thing back in the preseason.

Berding insisted he believes in this current group of players, though.

“I think it's still early enough in the year,” Berding said. “Again, we believe in this group of players. We have a strong mentality in the locker room. We have players whose leadership is unquestioned. ... This is a quality group, and we have plenty of time to build on those talents, to build on that mentality and get results. This is a group that was recruited to come be a part of this club because they believed in FC Cincinnati, this project and what it represented. ... We have to set them up for success, and we believe this change will set our players up for success, and we believe we will have the opportunity then to get results for our city.”

It likely didn’t help that midfielder Kenny Saief, who is on loan through June from Belgium’s Anderlecht, and Adi, the team’s first designated player, have both made harsh comments about the direction of the club in recent weeks.

Adi’s comments about a lack of identity came after the loss on Saturday when he got his first action since March 17 following an ankle injury that overlapped with a three-game suspension for a reckless operation charge.

Saief had said in training before the road trip that he was tired of the excuse this is a new team, something that Koch has emphasized throughout the season.

Koch was not available for comment and did not return messages at time of publication.

While FCC has struggled at Nippert Stadium since a 3-0 win over Portland in the home opener, Berding has shown more of a presence around the team locker room and even stood in the corner during Koch’s post-game press conference after an especially disappointing 3-0 loss to Real Salt Lake in the most recent home game April 19. In that game, FCC had the possession advantage the first half but allowed two goals in the final five minutes and never recovered.

Berding said he believed Koch had ample time to build the culture expected, and it was clear the situation wasn’t going to get any better unless a coaching change was made.

“We need to do better to begin to develop a positive identity and we think the change was required to make that happen,” he said.

FCC hired Koch in December 2016 to serve as an assistant to then-head coach John Harkes for the team’s second season. However, the front office fired Harkes on the eve of a preseason trip to Florida for the Orange and Blue’s first competition ahead of the 2017 campaign and promoted Koch.

Koch led FCC to two playoff appearances, an improbable run to the 2017 U.S. Open Cup semifinals and a dominant 2018 performance that resulted in the United Soccer League regular-season title. Shortly after Major League Soccer awarded Cincinnati an expansion franchise last May, FCC gave Koch a contract extension to keep him on board through the 2020 season.

Now, FCC is searching for its third coach in three years. An international search has begun for the club’s next head coach, but in the meantime, assistant coach Yoann Damet will serve in the role of interim head coach. Damet, 29, joined FC Cincinnati in March 2017 from the Montreal Impact organization, and has served as the team’s top assistant coach since then.

As interim coach, Damet will take on the title of youngest head coach in the MLS. He's also only one of two coaches in the MLS to have never stepped onto the pitch as a professional or collegiate player, according to the MLS.

“We believe Yoann is a very bright student of the game,” Berding said. “He has clear ideas how we want to play. He has a clear understanding of the talents that our players bring to the squad. He has very clear thoughts on training sessions that set players up for success. He has clear thoughts on players&#39; best positions that give them the opportunity to maximize their talents, and everyone is very anxious to get out on the field and begin the work for this weekend.”