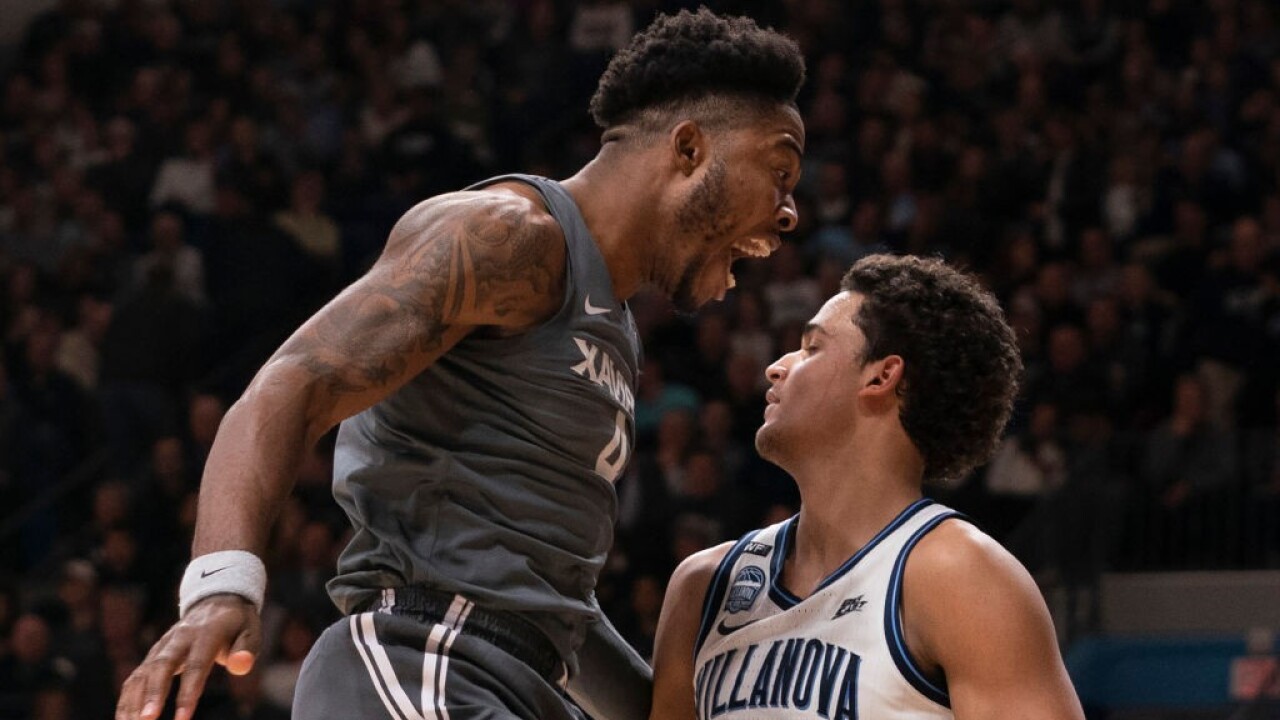 Copyright 2019 by Getty Images
Mitchell Leff/Getty Images
VILLANOVA, PA - DECEMBER 30: Tyrique Jones #4 of the Xavier Musketeers reacts in front of Jeremiah Robinson-Earl #24 of the Villanova Wildcats after dunking the ball in the second half at Finneran Pavilion on December 30, 2019 in Villanova, Pennsylvania. The Villanova Wildcats defeated the Xavier Musketeers 68-62. (Photo by Mitchell Leff/Getty Images)

VILLANOVA, Pa. — Xavier finished 1 for 11 from 3-point range in a 68-62 loss to No. 10 Villanova Monday, but coach Travis Steele said he wasn’t upset about that.

“I don’t care about our 3-point shooting. It didn’t cost us the game,” Steele said. “I think we’re one of the best two-point field goal teams in country. That’s who we are, and we’re going to play to our strengths.”

Steele was disappointed, though, with the Musketeers’ 14 turnovers and the Wildcats' 12 offensive rebounds that led to 11 second-chance points in the Big East Conference opener for both teams.

“I have a ton of respect for the way they play, but I was really disappointed in our play,” Steele said. "We have to make better decisions with the ball. We have to block out. We knew what was coming and I didn’t think we handled it well.”

Villanova led by as many as 17 points in the first half, but Xavier trimmed that deficit to seven, 32-25, at the break.

The Musketeers were within six, 63-57, after Tyrique Jones’ hook with 2:03 left and had a chance to cut it to three with just over a minute left. But Naji Marshall’s 3-point try went off the back rim.

“I really liked his decision-making in the second half,” coach Jay Wright said of his point guard. “He made great decisions on when to take it at them, when to get someone else a shot, and when to take a 3.”

Gillespie got hot after halftime and drained a key 3-pointer with 4:37 remaining that gave the Wildcats a 60-49 lead and some needed breathing room.

Jermaine Samuels added 14 points for Villanova, which has won six in a row. The Wildcats hadn’t played since a 56-55 victory over then-No. 1 Kansas on Dec. 21.

The victory was more of the same for the Wildcats, who have dominated the Big East since the conference realignment in 2013. They have won five of the six regular-season conference titles and four of six tournament titles, including the last three. Villanova won a pair of national titles, in 2016 and 2018, during that stretch.

Wright knows another Big East title isn’t going to be easy, especially given that Villanova starts three sophomores and a freshman, along with a junior.

“That’s what the Big East is going to be like every night, home or away,” he said. “It’s going to be a grinder. There are just so many good teams in this league. This is going to be incredible this season. It’s a great learning experience for us.”

Xavier: Despite the defeat, the Musketeers still have a chance to get off to a strong start in conference play with three of the next four and five of the next seven at home in the comfy confines of the Cintas Center. Xavier has won all eight games at their on-campus arena this season and has the seventh-best home winning percentage in the nation all-time with a 266-41 (.866) mark in the 20-year history of the building.

Villanova: The Wildcats will have a busy two months of conference play. After playing 11 nonconference games in 57 days, Villanova plays its final 20 contests over a 66-day stretch that began with Monday’s game against Xavier. Of those 20 games, 18 are against Big East opponents, with the exception of nonleague matchups versus UConn and Temple.

Villanova: At Marquette on Saturday.