Xavier hungry to get back to NCAA tourney: 'We’ve got the right pieces' 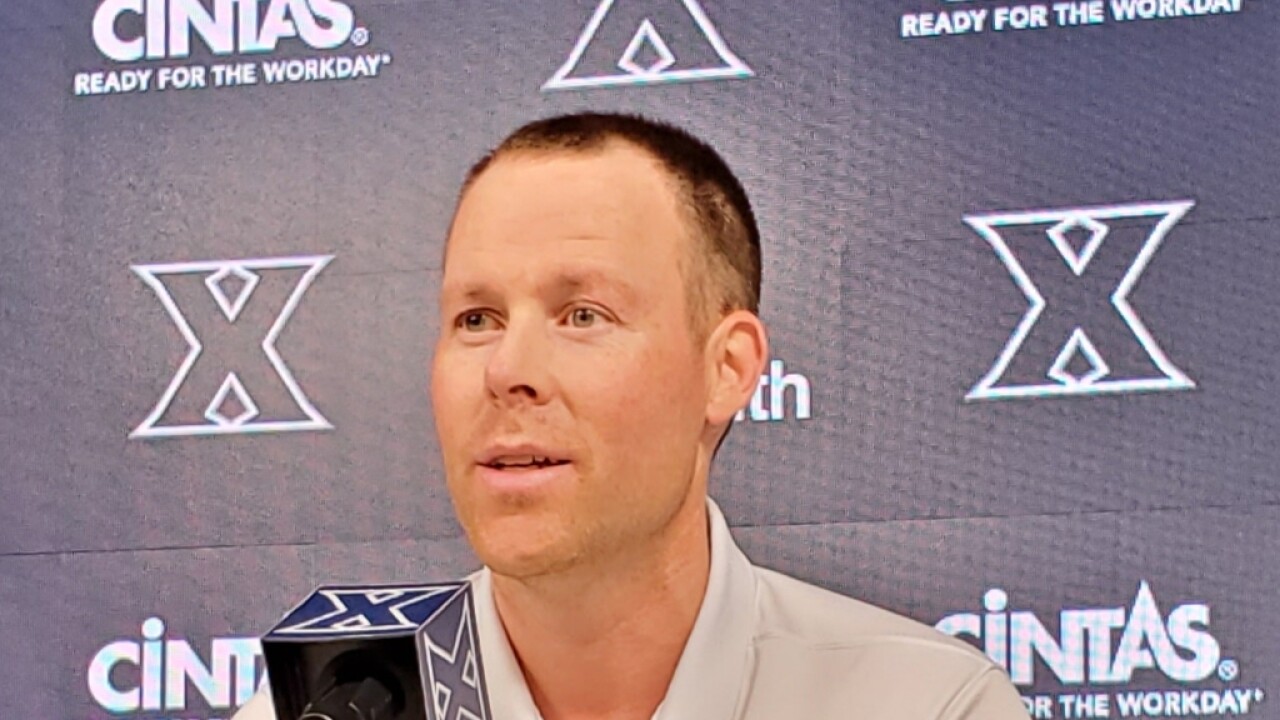 CINCINNATI — More than 4,000 miles away from Xavier University’s campus, this year’s group of Musketeers forged the bonds that could help them live up to some lofty expectations for the upcoming season.

The Musketeers won all three games during their time in Barcelona and Madrid, Spain, in August, but more important for the players was the time they spent together off the court.

“When you’re out of the country and nobody knows our language, the only thing we had to do was get to know each other,” said junior guard Paul Scruggs. “So that’s what we did at the hotels, just had big group sessions and talked about anything that comes to mind. There was very little basketball talk.”

Musketeers head coach Travis Steele was pleased to get an extra three games and 10 practices to help expedite his team’s preparation for this season. However, like his players, he valued the off-the-court bonding most — especially with seven freshmen and two transfers on this year's squad.

“It put our chemistry ahead of schedule,” said Steele, who’s in his second year at the helm. “I’ll never forget when I saw (senior guard) Quentin Goodin having lunch with (freshman forward) Zach Freemantle. Those two only. Usually you see the upperclassmen hanging together or the new guys. That made me think we’re going to be pretty good.”

Most pundits agree that the Musketeers could be very good this season. After not being ranked in a major poll at any point last season, the Musketeers checked in at No. 19 in the Associated Press preseason poll and 21st in the Coaches’ poll.

“The rankings, that stuff doesn’t really tend to matter,” Goodin said. “Now that we’re ranked, people assume everything’s going to be good. We have to work for our number. But that’s not our ultimate goal — we want to make it to a Final Four and (win) a championship.”

The logic for the preseason ranking is simple: Despite failing to reach the NCAA Tournament for the first time in five seasons and finishing 19-16, the Musketeers, who won six of their final seven regular season games to salvage an NIT bid, are bringing back their top four scorers along with two top transfers and a consensus top-20 recruiting class.

“Playing in the NIT is about as low as I could go,” Goodin said. “One of the things that’s better this year is our chemistry and our jell. That happened almost instantly, even though we have a bunch of new guys. Then we went to Spain, and it all got a lot easier. It was a bonding trip for us.”

Big East Conference coaches picked Xavier to finish third in the conference this season behind Seton Hall and Villanova. The Musketeers finished 9-9 in conference play last year and in a four-way tie for third.

“While we were disappointed to not make the NCAA Tournament, I was proud of our guys and the way they responded at the end of the year,” Steele said. “I think we got a lot better as the year went on. We showed great leadership.”

Much of the preseason hype this year surrounds returning starters Naji Marshall (14.7 points per game), Scruggs (12.3), Tyrique Jones (11.3) and Goodin (11.0). Jones was the team’s leading rebounder last year at 7.7 per game, followed by Marshall at 7.2.

The Musketeers also nabbed a top transfer in 6-foot-8 junior forward Jason Carter, who averaged 16.5 points and 6.7 rebounds and had 21 blocks last year for Ohio University.

“When I started looking for a new school, one thing that stood out for me (at Xavier) was the winning culture and the support that they get here,” Carter said. “They are great players here, and we’re really starting to mesh. The rankings are great, but you still have to go out and prove that.”

For the returning players, the motivation is get back to the NCAA Tournament, something Xavier has accomplished in 12 of the past 14 years.

With added depth and considerable length, Xavier expects to be much-improved on the defensive end of the floor this season.

“We could be elite on the defensive end, if our guys stay committed to that,” Steele said.

Several years ago, former Musketeers coach Chris Mack began recording “kills,” which in basketball slang is when a team gets three straight defensive stops. This season, Xavier will ask the Cintas Center crowd to help count them.

New for this season will be a section on the scoreboard where the crowd can monitor the Musketeers’ consecutive stops. When they reach two, they’re asking fans to bark and cheer, much like Xavier’s players have for the past few years.

“When we’re at two stops, a lot of the fans right behind our bench probably hear our players, coaches and managers start barking like crazy to let our guys know that it’s kill time,” Steele said.

According to Steele, the Musketeers have won 98% of their games over the past decade when they’ve recorded seven or more kills in a game.

“This is college basketball’s version of third down,” he said.

When the Musketeers play their first and only exhibition game vs. Indianapolis on Wednesday at Cintas Center, they could be without a couple key players.

Carter, who has been dealing with a back issue for roughly three weeks, returned to practice on Monday but was still avoiding contact.

“We’re not trying to push it,” Carter said. “It’s feeling good. Haven’t had any setbacks, which is the big thing.”

Jones is day-to-day with a sore knee. Tandy is expected to miss at least a couple of weeks with a foot injury.

Xavier will open the regular season against Jacksonville on Nov. 5 at Cintas Center.