Xavier needs to take advantage of its Big East opportunities 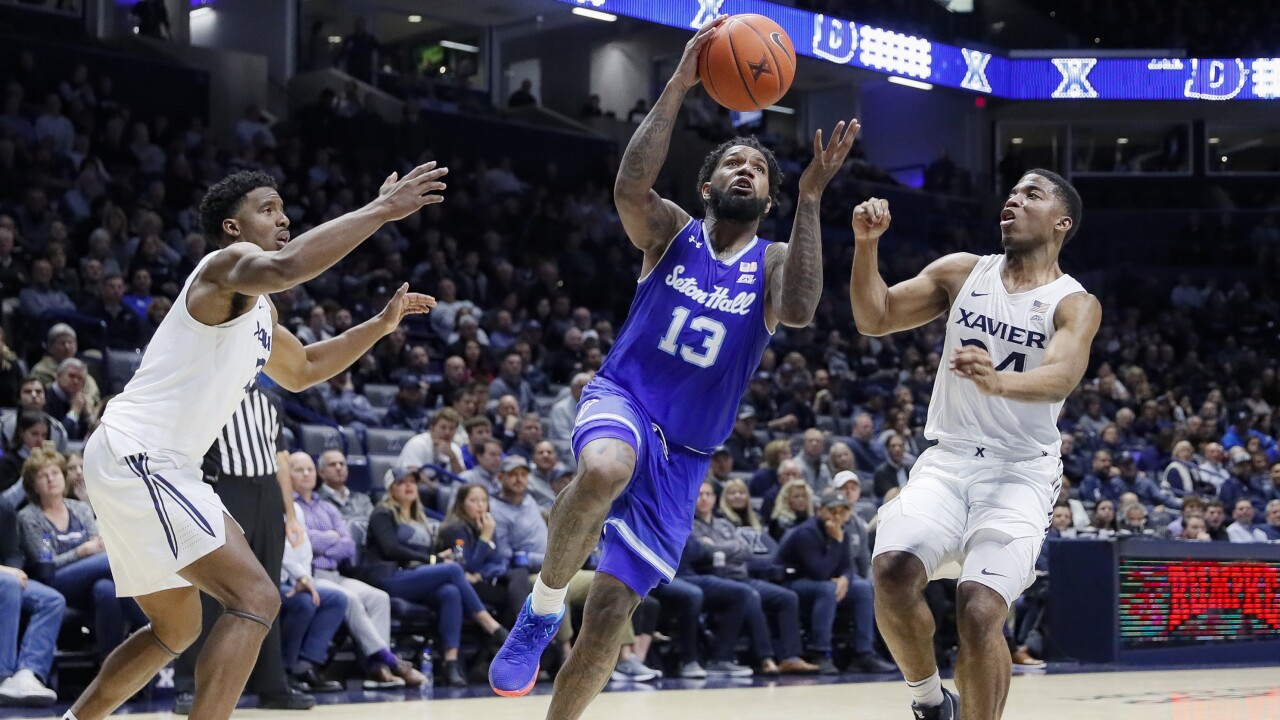 (Copyright 2020 The Associated Press. All rights reserved. This material may not be published, broadcast, rewritten or redistributed.)
John Minchillo/AP
Seton Hall's Myles Powell (13) drives against Xavier's KyKy Tandy, right, during the second half of an NCAA college basketball game, Wednesday, Jan. 8, 2020, in Cincinnati. (AP Photo/John Minchillo)

CINCINNATI — If the Xavier Musketeers are going to return to the NCAA Tournament, they need to take advantage of the opportunities the Big East Conference is affording them this season. On Wednesday night at Cintas Center, they squandered a chance against a Seton Hall team picked in the preseason to win the league.

It was another valiant comeback effort by the Musketeers, who cut a 16-point deficit to four with 1:58 remaining but then got careless with the ball down the stretch. Seton Hall finished off an 83-71 win to end Xavier’s 13-game home winning streak.

Much like they did in losses earlier this season to Florida, Wake Forest and Villanova, the Musketeers managed to give themselves a chance at the end despite trailing for much of the game. It’s not the best blueprint for success in the Big East, however, especially in what many consider to be the top league in the country.

“The margin for error in this league is very, very thin,” said Xavier head coach Travis Steele. “Taking care of the ball matters early in the game. Set the tone the right way. Details matter. Every possession matters. We got exposed by Seton Hall. We’ve got to fix a lot of things.”

The Musketeers (12-4, 1-2 Big East) will have to fix those things against one of the toughest conference slates in the country. Wins in the Big East, especially on the road, are difficult to get, but they’re worth their weight in gold for NCAA Tournament resumes.

In the latest NET Rankings, which replaced the Ratings Percentage Index (RPI) last season as the preferred evaluation tool to measure a team’s NCAA Tournament merit, the Big East had six teams in the top 40. Every Big East member was ranked in the top 100.

The average NET Ranking for the league on Wednesday night was 42.3. The highest was Butler (4) and the lowest was Providence (81). Xavier was 38th.

The NET Ranking system relies on game results, strength of schedule, game location, scoring margin, net offensive and defensive efficiency, and the quality of wins and losses. Most believe it does a more complete job of evaluating a team’s body of work than the RPI.

A Quad 1 win carries the most weight in the eyes of the NCAA Tournament selection committee. Quad 1 wins are defined as home games against opponents ranked top 30 in the NET or road games against teams in the top 75. There are plenty of Quad 1 wins to be had on the Big East schedule.

Seton Hall was No. 22 in the NET rankings going into Wednesday’s game, and the Pirates walked out of Cintas with the Quad 1 win.

Winning at home is important in any season, but with Big East road games especially difficult to get this season, it’s even more critical. The game against Seton Hall kicked off a three-game homestand for Xavier, with Creighton on Saturday (2 p.m.) and Georgetown next Wednesday (6:30 p.m.).

“If you want to give yourselves a chance to win this league you have to protect home court,” Steele said. “That’s big for us moving forward.”

So is putting together a solid 40 minutes of basketball. Steele has been waiting for his team to do that all season and it hasn’t happened yet. The closest Xavier came to granting Steele’s wish was on Dec. 22 when the Musketeers won at TCU. The Musketeers led by 19 points with 3:44 left. But the Horned Frogs finished the game on a 13-2 run to make the final score closer than it should have been.

Last week the Musketeers couldn’t overcome a 17-0 first-half run by Villanova and lost 68-62 in Philadelphia.

In Wednesday’s loss, nine of Xavier’s 13 turnovers came in the first half, digging them a hole they were never able to escape.

Watch the Musketeers play for only a few minutes and their weaknesses are clear. They aren’t a good shooting team, they turn the ball over too often, and they have a stretch or two in every game when nothing seems to go right.

Through 15 games, Xavier shot 29% from three-point range, 67% from the free throw line and committed nearly 15 turnovers per contest. The Musketeers still managed to win 12 of those 15 games with the three losses by a combined 13 points.

Freshman guard KyKy Tandy could be a key for the Musketeers, eventually. After missing more than a month with a foot injury, Tandy is finding his rhythm and increasing his minutes. The former four-star prospect went 4-for-6 from three-point range in 22 minutes during Sunday’s win over St. John’s. On Wednesday, he hit his first three-point attempt and didn’t score again.

For a team that has three returning starters in Jones, senior point guard Quentin Goodin and junior guard Paul Scruggs, and some experienced transfers, Xavier looks disjointed at times on offense. With leading scorer Naji Marshall taken out of the game in the first half on Wednesday, the Musketeers had nobody else to step up.

The Musketeers’ defense has helped them overcome inefficiencies in other areas, but it let them down on Wednesday. After averaging 64 points allowed through 15 games, Xavier gave up 83 to Seton Hall, the most it had allowed since an 87-82 loss to No. 12 Marquette on Jan. 26 of last season.

The Musketeers have reached 12 of the past 14 NCAA Tournaments, one of only nine schools to do so. But after missing out last season in Steele’s first year as head coach, Xavier has plenty of work to do.

The Big East could be a land of opportunity for the Musketeers, or a trail of tears.

“You can’t get too high or low in this league,” Steele said. “But you have to play with urgency, or you’ll get embarrassed.”