DePaul stuns Xavier in first round of Big East Tourney 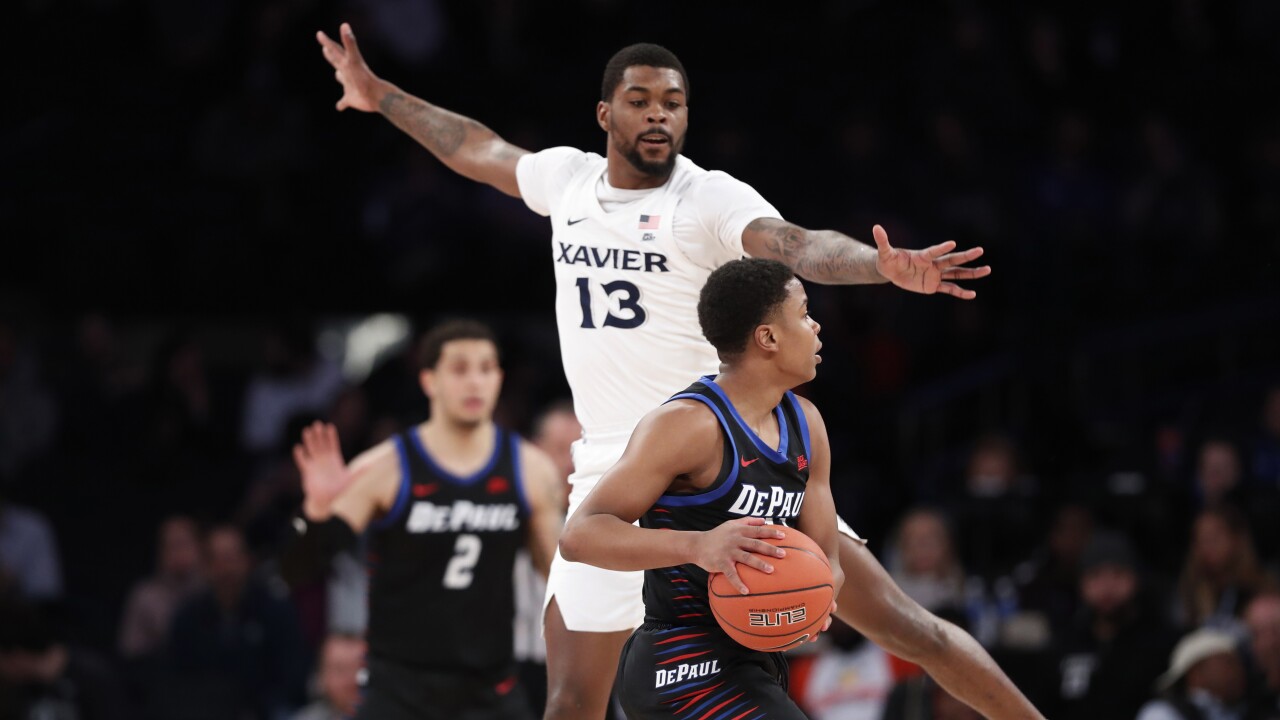 (Copyright 2020 The Associated Press. All rights reserved. This material may not be published, broadcast, rewritten or redistributed.)
Kathy Willens/AP
Xavier forward Naji Marshall (13) defends against DePaul guard Charlie Moore (11) during the first half of an NCAA college basketball game in the first round of the Big East men's tournament Wednesday, March 11, 2020, in New York. (AP Photo/Kathy Willens)

NEW YORK — Xavier's Naji Marshall seemed to hit the nail on the head.

“I think basketball is a game of runs,” the junior forward said. "They were up nine, we were up six. Next thing you know, we lose the lead."

And the game. And not just any game.

The seventh-seeded Musketeers seemed to use all the energy they had to storm back from an 11-point deficit near the end of the first half and build a thin second-half advantage, only to watch the 10th-seeded Blue Demons rally to a 71-67 upset in a first-round game at Madison Square Garden.

"Coach said there, we were pretty tired," said Marshall, who scored 15 points for Xavier. "Crashed the offensive glass towards the second half. Like he said, we were tired. And we didn’t execute our system on defense or offense.”

Afterward, Xavier coach Travis Steele lobbied for the NCAA Selection Committee to take his 19-13 team, but the committee doesn't like 13-loss teams that lose back-to-back-to-back to close out the season. More likely, the Musketeers will be NIT-picking for the second year since Steele took the reins from Chris Mack.

Xavier hasn't missed the Big Dance for two straight years since 1999 and 2000. The Musketeers have made the NCAA Tournament 16 times in the last 19 seasons.

Xavier, which beat 16-16 DePaul twice during the regular season, might have clinched an NCAA berth with its 20th win. But we'll never know.

Now 10th-seeded DePaul moves into Thursday's quarterfinals against second-seeded Villanova for the first time in six years with a win not many anticipated.

Paul Reed had 23 points and 12 rebounds and the Blue Demons won their first conference tournament game since 2014.

“We just came out and stuck with the plan, the game plan,” said guard Charlie Moore, who added 18 points and nine assists. “Came out, gave energy. Tried to limit their rebound, offensive rebound attempts, just play defense as a team. I thought we did a great job of that tonight.”

“For everybody this time of year a lot at stake,” DePaul coach Dave Leitao said. “Want to live to play another day. And in order to get to where you want to get to, you’ve got to take it one step, one possession at a time. I thought we did do that.”

Tyrique Jones had 22 points to lead Xavier while Zach Freemantle matched his career high with 18.