When the pressure's on, UC's Jarron Cumberland is at his best 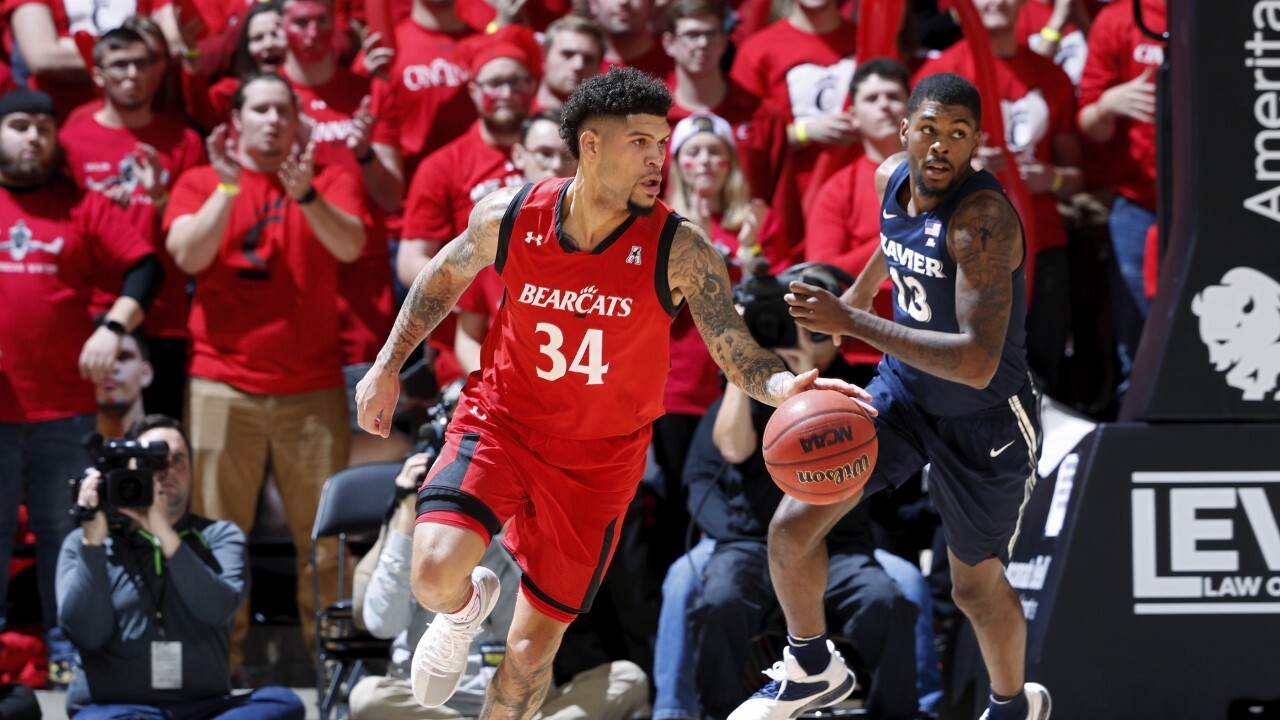 Jarron Cumberland knew the Cincinnati Bearcats were relying on him this season to step up as their leader. He took that role and ran with it, and UC hasn’t skipped a beat.

A 6-foot-5 junior shooting guard, Cumberland exceeded expectations to become the AAC Player of the Year and to lead UC to a second straight conference tournament title and a ninth consecutive NCAA Tournament appearance while averaging 18.8 points, 4.5 rebounds and 3.6 assists. He will be an important factor as the seventh-seeded Bearcats head into their NCAA Tournament first-round game Friday against Iowa in Columbus.

“I just understand my role on the team and I knew what Coach was expecting from me,” Cumberland said in an interview two weeks ago with local media. “… Coach was saying I needed to improve as a player with ballhandling, defense, making more shots, drawing more shots for me and getting open shots for my teammates. I learned a lot from the three guys that left last year (Clark, Evans and Kyle Washington).”

Cumberland came prepared for his new role this year, becoming a more dedicated player. He spent more time in the weight room, watched his nutrition and was constantly practicing, and the results showed immediately.

“We know he's changed his body dramatically, his work habits,” Cronin said. “He had more charges his freshman year than any player I've ever coached. Now, he rarely gets a charge. He’s always had the talent, he just had to adjust his game. His work ethic has gone through the roof.”

As a freshman in 2016-17, Cumberland was on The American's All-Rookie Team and was named the AAC Co-Sixth Man of the Year, but he was overshadowed by Clark, Evans and Washington when it came to conference award considerations last year, even after averaging 11.5 points, 4.0 rebounds and 2.9 assists as a sophomore.

This year he was the only Cincinnati player to be recognized in both the preseason and end-of-season awards. Cumberland gave UC its second straight Player of the Year honor, after following Clark’s lead last year.

"He's a by-product of your program," Cronin said. "As a program, we take a lot of pride -- that's two straight years for us. If you recruit good kids that will put in the work like Gary and Jarron, then you stand a chance. The light came on for him in the last year about dedication."

Cumberland is quiet about his achievements, though. Most weeks he declined interview requests and spoke only two weeks ago when the AAC Player of the Year awards were announced – and it most likely took some prodding from the communications staff to get him to agree to a group interview.

“I think he's shy -- not around us, but other than us, he is shy, quiet,” Scott said. “He is soft-spoken and likes to stay to himself. But when he's around us, he is one of the most talkative players, depending on what we're doing. He's a great guy. He's a great player. He's someone I call my brother. He's funny. He's a goofball.

“He lets his performance speak for him, and look what he's done. So I'm all for that. He just isn't going to talk about it.”

Scott credits Cumberland for the team’s success, not just because of his scoring. He’s made the others around him better, either by getting them the ball in position to score or by opening things up for them by drawing an extra defender.

Of course, the scoring has been big, too, though.

“Now that he's the No. 1 scorer, he's going to put the load on his shoulder and go score,” Scott said. “He's just hungry. He wants to be great. He wants us to be great. When we have trouble scoring, he wants the ball and he's going to create. He's a game-changer, gets other people going, too. He impacts the game in a lot of ways. I think he heard he needed to be the No. 1 guy, and he took off with it.”

Cumberland enters the tournament with 628 points this season and 1,345 career points, sitting at 20th on UC’s all-time scoring list. Similar numbers next year – if he returns – would give him a chance to move into the top 3. Steve Logan sits at No. 3 and recorded 1,985 points from 1999 to 2002. Oscar Robertson’s 2,973 points are likely untouchable.

Whether Cumberland will be back is up in the air. He hasn’t addressed it, but some are projecting he will leave for a shot at the NBA. Cumberland currently isn’t on any of the major NBA mock draft boards, but he did make some of the lists back in the fall.

Cronin doesn’t care about mock drafts, though. Whether it’s this year or next, he believes Cumberland will make it to the NBA.

“He's going to play professional basketball,” Cronin said. “It's a metrics game. The NBA draft is a whole different animal. When he gets his opportunity, he will put numbers up.”

When asked whether he thought Cumberland would be back next year, Cronin said that is the least of his worries. But he seems to be preparing to replace him. Evans left after his junior season.

“My thing is, with all our players, the joy of it is how you can help them become what they want to become,” Cronin said. “Obviously in recruiting you try to prepare for every scenario and you hope that whatever decisions somebody would make, like a Jacob Evans, that it works out for him in the long run. That's all you can do.”

In the meantime, as the Bearcats head into the NCAA Tournament, UC is just looking for Cumberland to do what he’s always done – perform in the spotlight.

He scored 33 points in the AAC Tournament final against Houston for his 17th game with 20 points or more, and Cumberland said he loves stepping up when the pressure is on. There’s no greater pressure than in March, and UC is looking to advance beyond the first weekend of the tournament for the first time since 2012.

“The atmosphere and the spotlight -- I just know everybody is there and there is so much everybody expects from me, and I have to play my same game every game,” Cumberland said.