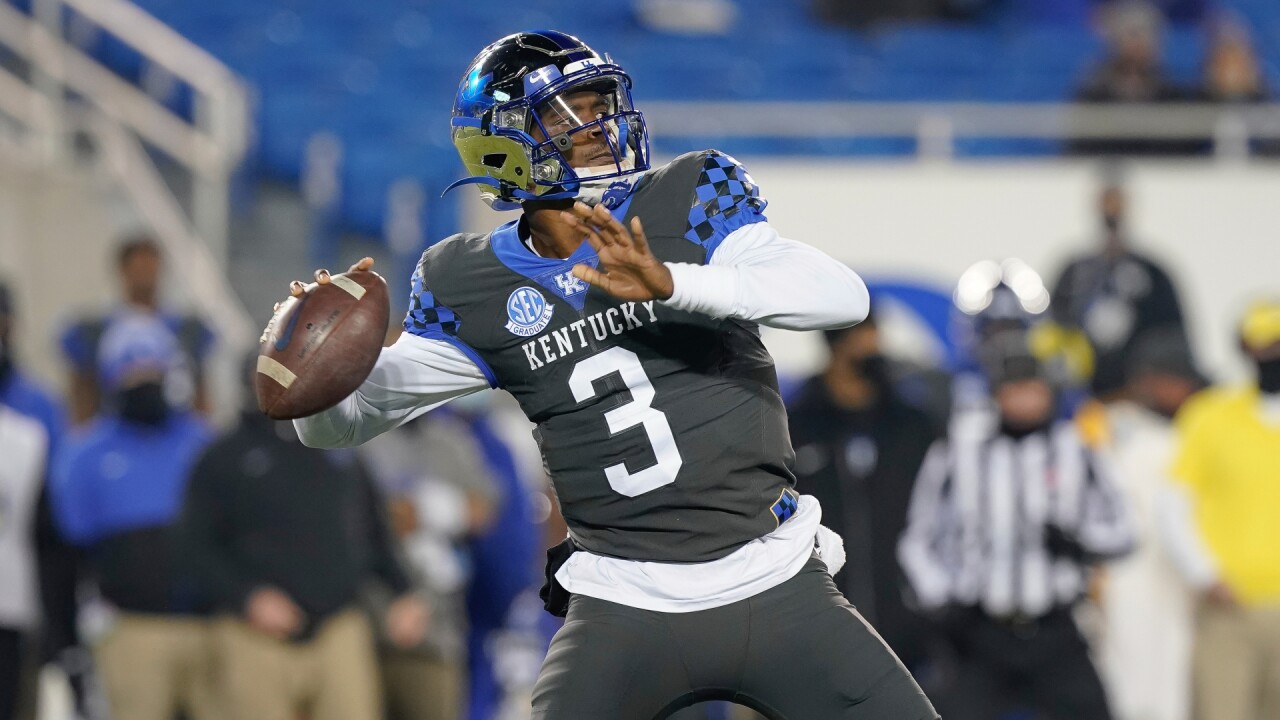 (Copyright 2021 The Associated Press. All rights reserved. This material may not be published, broadcast, rewritten or redistributed.)
Bryan Woolston (AP Photo)
Kentucky quarterback Terry Wilson (3) throws the ball during an NCAA college football game against South Carolina, Saturday, Dec. 5, 2020, in Lexington, Ky. North Carolina State (8-3) is a 2 ½-point underdog against Kentucky (4-6) in the TaxSlayer Gator Bowl, a number the Wolfpack consider a slight heading into Saturday, Jan. 2, 2021 game in Jacksonville.

Kentucky goes for its third consecutive bowl victory in the TaxSlayer Gator Bowl against No. 24 North Carolina State on Saturday.

North Carolina State, meanwhile, is trying to close the season with five consecutive victories for the first time since 1965. The Wolfpack are 2 1/2-point underdogs, a number that got the attention of players and coaches this week. They plan to use it as motivation.

Kentucky goes for its third straight bowl victory. The Wildcats beat Penn State in the Citrus Bowl two years ago and topped Virginia Tech in the Belk Bowl last year. North Carolina State is trying to close the season with five consecutive victories for the first time since 1965.

Kentucky: Senior LB Jamar “Boogie” Watson has 18 ½ career sacks. He needs half a sack more to pass Dennis Johnson (1998-2001) for fourth on the school’s all-time list.

NC State: LB Payton Wilson leads the ACC in tackles per game (10.8) and is the first Wolfpack player to do so since 2000. He ranks third in the Football Bowl Subdivision in tackles and was at his best in the regular-season finale against Georgia Tech, when he led the team with 11 tackles while playing with dislocated shoulders.

The TaxSlayer Gator Bowl will air at noon, Saturday, Jan. 2 on ESPN.

Copyright 2021 Scripps Media, Inc. The Associated Press contributed to this report. All rights reserved. This material may not be published, broadcast, rewritten, or redistributed.