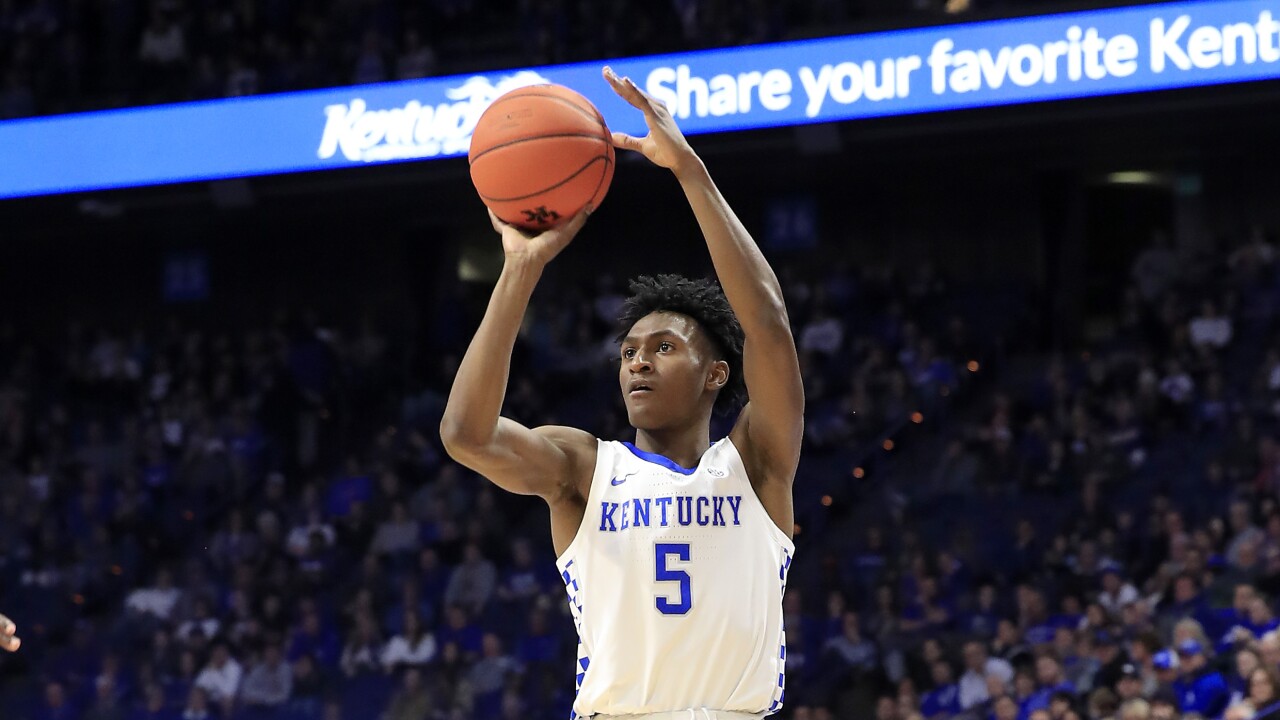 LEXINGTON, Ky. (AP) — Just as No. 9 Kentucky seemed destined to grind past another supposedly overmatched foe, it clicked into high gear against Mount St. Mary's to finally win comfortably.

Immanuel Quickley had eight of his 13 second-half points during an 18-3 run that helped the Wildcats pull away from the Mountaineers 82-62 on Friday night.

Ashton Hagans had 16 points, including a three-point play during the surge the Wildcats (4-1) needed after struggling with lesser opponents the previous two games, including last week's stunning upset loss to Evansville. For one half they appeared to follow the same pattern in leading by just 39-34 at the break with four lead changes.

Forward EJ Montgomery, who had missed three games with an ankle injury, sank a 3-pointer soon after to provide some breathing room before Kentucky took off. Quickley himself returned from a one-game absence with a chest injury and eventually hit a short jumper before dropping two 3s to make it 59-39, leading Kentucky's 5-of-10 long-range shooting after the break.

While the Wildcats made just 6 of 15 from behind the arc, that was a marked improvement from their 7-for-43 performance over the previous three contests. And that's where being close to full strength paid off.

Nick Richards had 11 of his 19 points in the first half and finished with seven rebounds in nearly 33 minutes. Tyrese Maxey added 11 for Kentucky, which shot 55% from the field. Quickley scored all 13 of his points in the second half, while Montgomery had seven points and six rebounds.

The Wildcats recorded 20 assists and outrebounded the Mountaineers 35-31, but only grabbed six offensively. And coach John Calipari quickly noted that they must improve for his team to meet expectations.

Such as, handily beating visitors.

"We showed signs in the second half, but we're not there," the coach said. "We may be two months away with this team. I don't know."

Damian Chong Qui had 11 points, while Brandon Leftwich, Omar Habwe and Malik Jefferson had 10 each for the Mountaineers (1-5), who lost their fourth in a row.

Whether it was just having another big man on the floor, or welcoming back a key regular, Calipari was glad to have the 6-foot-10 Montgomery at his disposal. "Not having him really affects us," the coach said, "and having him when he's playing, you know, he's a difference maker."

Told of Calipari's compliments, Montgomery just laughed and added, "I don't know if they really needed me, but I'm somewhat of a help. I just try to get it in, play with energy and just help my team win."

Mount St. Mary's: The Mountaineers offset their height disadvantage to Kentucky with hustle that kept them close, especially on the glass. Keeping up became tougher once the Wildcats started hitting 3s, an area the Mount started well before making just 2 of 13 in the second half.

"Our plan was to limit transition, limit in the paint and make them jump shooters," coach Dan Engelstad said. "But they were capable shooters. We wanted to make sure everything was contested, and I thought in the first half our contests were much better than they were in the second."

Kentucky: The Wildcats got a little closer to full strength with the returns of Montgomery and Quickley. Montgomery was a big help in the post and made a couple of nice baskets in his return, with his 3 helping ignite the decisive spurt.

After two lackluster efforts, including the Evansville upset, Kentucky finally played the type of game that should maintain its top-10 presence with another game on Sunday.

Kentucky hosts Lamar on Sunday in the third contest of the BBN Showcase.