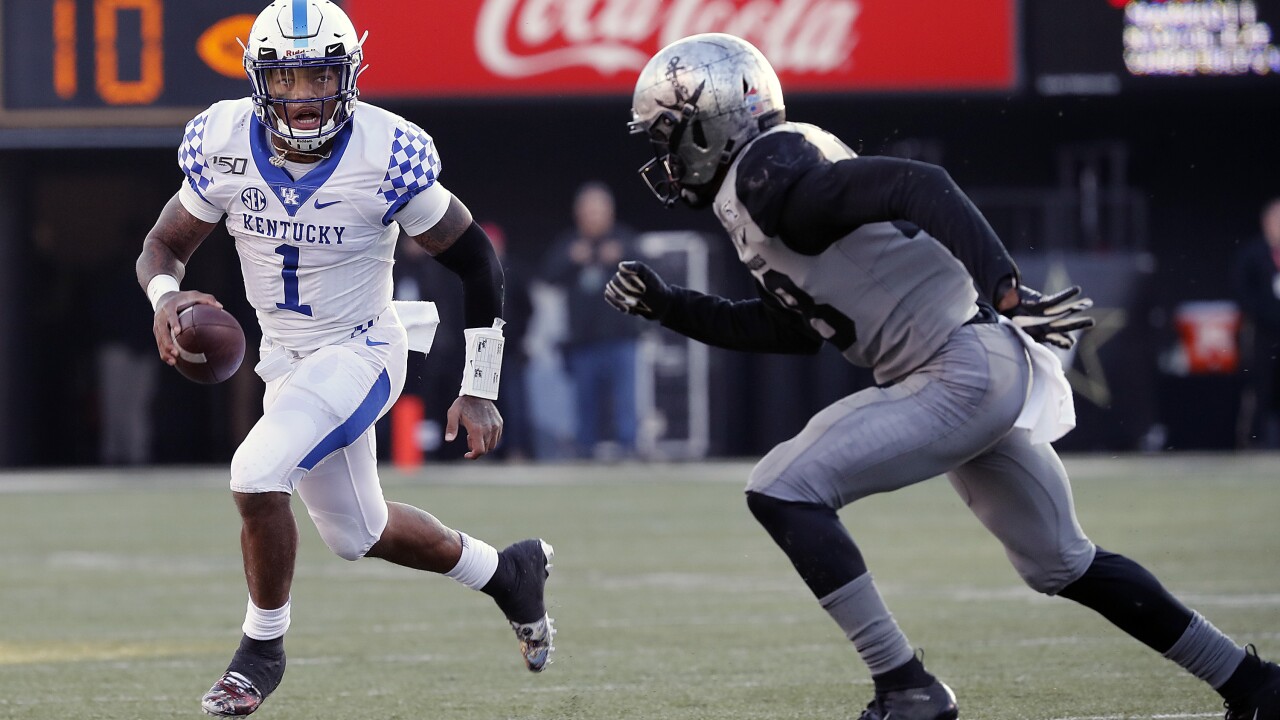 NASHVILLE, Tenn. (AP) — Mark Stoops wasn’t sure how his team would respond after suffering a disappointing loss to Tennessee the previous week.

He found out Saturday.

Kentucky rushed for a season-high 401 yards and kept its bowl hopes alive with a 38-14 win over Vanderbilt.

“We faced some adversity last week – tough game,” said Stoops, the Wildcats coach. “Sometimes that can linger. It did not this week as you can tell.”

Lynn Bowden and Chris Rodriguez both rushed for over 100 yards for the Wildcats (5-5, 3-5 Southeastern Conference).

Rodriguez led the way, rushing for 129 yards and two touchdowns. Bowden, in his fifth game at quarterback since moving over from wide receiver, added 110 yards rushing and one TD.

Kavosiey Smoke rushed for 95 yards and one TD for the Wildcats in a matchup between two teams in the bottom of the SEC’s Eastern Division.

The Wildcats scored 35 consecutive points after falling behind by 11 early in the game.

It was the largest margin of victory in the series since 2001.

“This is a game of momentum and I thought we created some early,” Commodores coach Derek Mason said. “But today we just got out-physicaled on both sides of the ball up front and we lost the line of scrimmage. Didn’t tackle very well. I thought they ran through tackles, through arm tackles, and just extended drives and plays.”

Kentucky rambled for a season-high 528 yards in total offense and nearly doubled Vanderbilt in time of possession.

Ke’Shawn Vaughn scored on a 5-yard run with 5:21 left in the first quarter and two plays from scrimmage later cornerback Allan George raced to the end zone on a 67-yard fumble return to extend the Commodores’ early lead.

“It would be easy for the guys to panic if they didn’t have confidence in what we were going to do because, let’s face it, we are methodical right now and there aren’t a ton of explosive plays,” Stoops said. “When you go down 14-3 if you’re not a team that has confidence in what we’re doing, you could flinch right there because you know points have been hard, but that wasn’t the case.”

Kentucky’s methodical offense marched down the field for 30 first downs and Vanderbilt mustered only 13.

Kentucky: The Wildcats need a home win over Tennessee-Martin or Louisville in their last two games to become bowl eligible for the fourth straight season.

Vanderbilt: The loss puts more pressure on coach Derek Mason, whose only wins this season were against Missouri and Northern Illinois.

Rodriguez and Smoke, both redshirt freshmen, made impressive strides running the ball. “I noticed it today: a little bit of growth,” Stoops said. “Some of the runs they made today, I haven’t necessarily always seen. You’ve seen flashes, you’ve seen them do some really good things, but today I saw a couple runs they kind of took over — pretty determined, tough runs. And also they showed some really athletic plays.”

Vaughn moved into eighth in Commodores career rushing with over 2,100 yards.