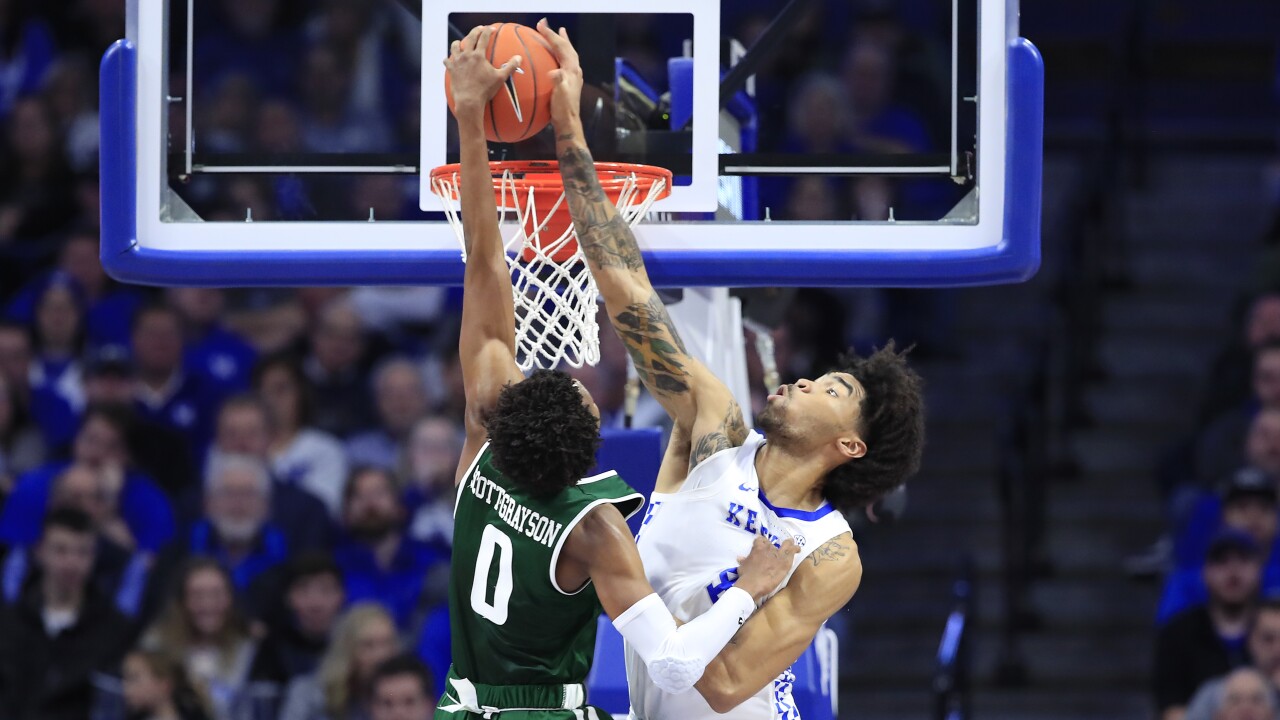 The upside for No. 9 Kentucky was how confidently the big men also shot jumpers, thanks in part to opportunities created by Ashton Hagans.

Richards and Montgomery each scored 16 points and combined for 17 rebounds, helping the Wildcats beat UAB 69-58 on Friday night.

The 6-foot-11 junior Richards made all seven shots from the field with several slams — including the game's opening basket that got the Wildcats (6-1) going — along with a couple of jumpers. Starting for the first time since the opener against top-ranked Michigan State, the 6-10 sophomore Montgomery posted a career high, going 7 of 13 from the field and giving Kentucky a strong post presence in its first game without injured starter Nate Sestina.

With Sestina out approximately four weeks after hurting a wrist on Tuesday, Kentucky will more require a lot more minutes and production from its frontcourt. Montgomery came back strong after missing three games earlier this month with a high ankle sprain.

"It's been good, I've been working on it," Montgomery said of his jumper. "It wasn't going down at first, but I'm not going to stop shooting. I'm going to continue to shoot and get better every day."

The Wildcats only trailed early in the game and steadily extended the lead. Richards had nine rebounds and Montgomery had eight with a block.

They played a lot together, but coach John Calipari also had them in different rotations with smaller lineups. Either way, they gave Kentucky the post depth it will need in the short and long term.

"It's tough when you've got eight guys," the coach said. "But if you're one of the eight, you're happy. And we'll have to keep this going until we get Nate back."

Immanuel Quickley and Ashton Hagans each added nine points as Kentucky shot 47% and controlled the glass 39-26 for its fourth consecutive win since being upset by Evansville on Nov. 12 when ranked No. 1. Hagans' 12 assists tied a career high and he committed just two turnovers.

Tyreek Scott-Grayson and Jalen Benjamin each scored 19 points for the Blazers (4-2), who shot 41% as their two-game winning streak ended.

Kentucky will stay in the top 10 and perhaps move up a spot with Duke's loss expected to shuffle the rankings.

UAB: The Blazers' bright spots were 8 of 16 shooting from long range — including several down the stretch that whacked a 20-point lead — while being edged just 30-28 in the paint. But they couldn't contain Kentucky's tall tandem and couldn't top 41% shooting for the fourth consecutive game. UAB also shot just five three throws, making two.

"We were one of the best offensive rebounding teams in the country, and we only got eight," coach Robert Ehsen said. "When we did, their length extremely bothered us. Maybe more mentally than anything. They didn't block a whole lot of shots, but we missed and hurried because of their length and athleticism."

Kentucky: The Wildcats got a promising look at how Richards and Montgomery played together and in rotations with smaller lineups. They'll need more help inside from freshmen Kahlil Whitney and Keion Brooks as the schedule gets tougher, but this was a good start.

"Here's the greatest thing," Calipari said. "With Nate being out, they're both going to have their chances to do it."

UAB faces another Power Five opponent on Tuesday at Texas before hosting No. 16 Memphis on Dec. 7.