Musketeers shooting as cold as the winter air 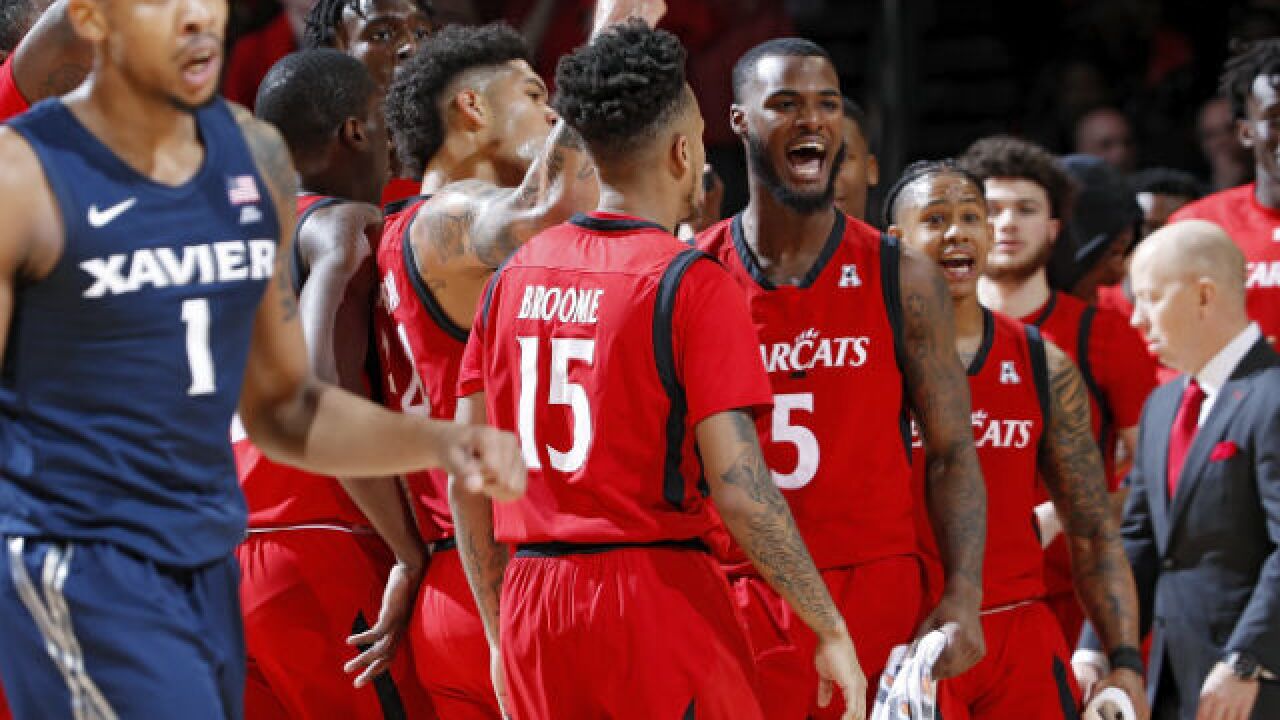 Image copyright 2018 Getty Images. All rights reserved. This material may not be published, broadcast, rewritten, or redistributed.
<p>CINCINNATI, OH - DECEMBER 08: Coach Mick Cronin (right) and Cincinnati Bearcats players react in the second half of the game against the Xavier Musketeers at Fifth Third Arena on December 8, 2018 in Cincinnati, Ohio. Cincinnati won 62-47. (Photo by Joe Robbins/Getty Images)</p>

CINCINNATI – Jarron Cumberland and Keith Williams  led a Cincinnati breakout late in the first half and cold-shooting Xavier was unable to keep up, resulting in the Bearcats’ 62-47 home-court win over the Musketeers in the 86th Crosstown Shootout Saturday afternoon.

Cincinnati used its front-line advantage to score in the paint and shut down Xavier’s inside game. Xavier was doomed when two of its three top scorers, Naji Marshall and Quentin Goodin, shot a combined 2 of 15 from 3-point range.

Xavier was playing the crosstown rivalry for the first time under new coach Travis Steele. He got a technical foul as Cincinnati pulled away in the second half.

Red confetti streamed from the rafters after the final buzzer. It was UC's biggest win yet in their renovated Fifth Third Arena, which reopened for this season.

After seven lead changes in the first 16 minutes, Cumberland hit back-to-back 3s during a 12-0 run that put Cincinnati (9-1) ahead to stay.

UC was trailing 18-14 when Tre Scott and Williams dunked and the Bearcats outscored the Musketeers 14-4 to close the first half with a 28-22 lead.

Xavier: Goodin was back after missing a win over Ohio on Wednesday because of illness. Xavier’s top returning player also has missed significant practice time with a shoulder injury.

Cincinnati: The Bearcats emphasize defense first, and their front line dictated the game by preventing Xavier from getting the ball inside. Fifteen of the Musketeers’ 25 shots came from beyond the arc in their lowest-scoring first half of the season. They made only three of them.

Cincinnati plays at No. 22 Mississippi State next Saturday.