Which college football team has the happiest fans in the land? Cincinnati Bearcats, that's who 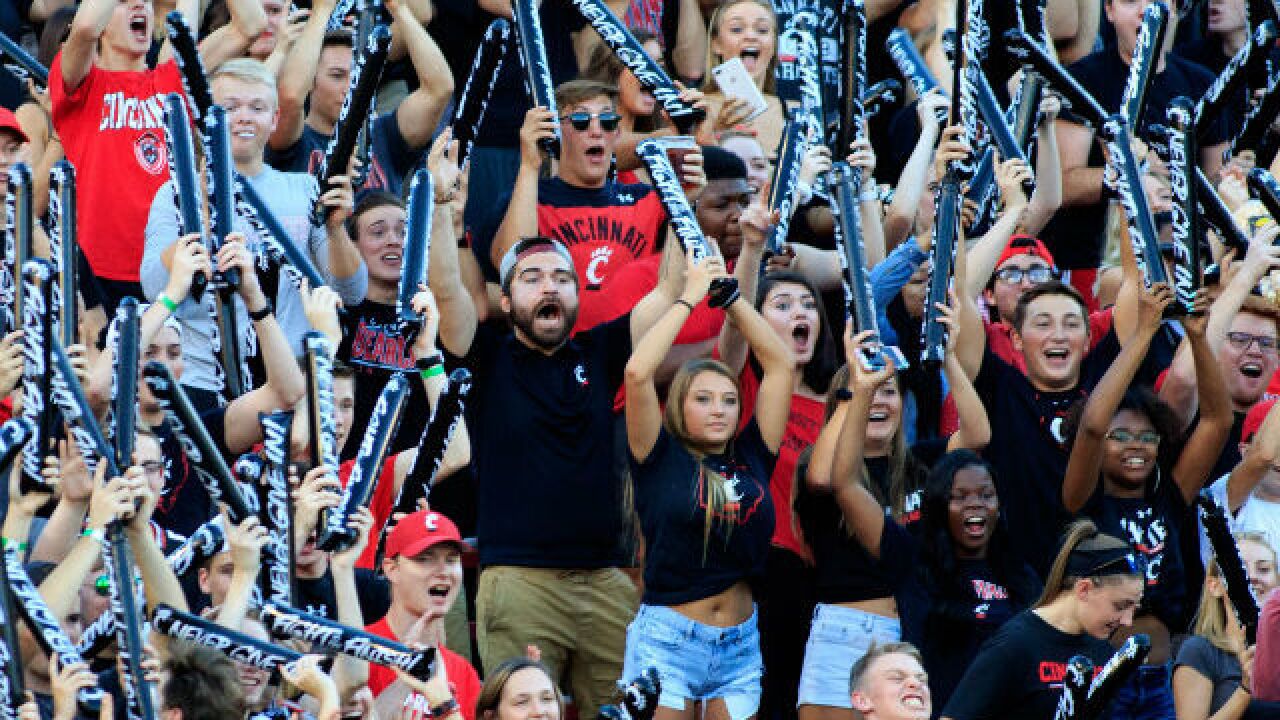 Image copyright 2018 Getty Images. All rights reserved. This material may not be published, broadcast, rewritten, or redistributed.
<p>CINCINNATI, OH - SEPTEMBER 15: Cincinnati Bearcats fan celebrate after a touchdown in the game against the Alabama A&M Bulldogs at Nippert Stadium on September 15, 2018 in Cincinnati, Ohio. (Photo by Justin Casterline/Getty Images)</p>

CINCINNATI – After all the “woe is me” times for Cincinnati sports fans, things are suddenly looking up.

The Bengals are 2-0 and fans aren't embarrassed to wear their jerseys in public again. FC Cincinnati has the best record and highest attendance in its league, and they’re going to Major League Soccer next year. And the Reds ... Uh, let’s skip the Reds.

University of Cincinnati football? The Bearcats are creating their own buzz.

UC has the happiest fans in major college football for the second week in a row, according to the ESPN Fan Happiness Index. Ahead of Georgia, Oklahoma, Alabama and Clemson in the Top 5. Ahead of No. 9 Ohio State, No. 19 Notre Dame and No. 24 Kentucky.

Apparently,  the Fan Happiness Index is a real – though rather subjective - thing.

The FHI attempts to “quantify the un-quantifiable: the emotion of every fan base,” according ESPN. “Remember, happiness isn't just about how much teams excel in every category, but how they're doing relative to what its fans expect."

UC has an advantage there, because Bearcat fans didn't expect this.

UC fans had reached their lowest point in 2016 under coach Tommy Tuberville, who ended his final 4-8 season by walking off the field and yelling at a booing fan to “get a job.”  When Luke Fickell came aboard in 2017, the new head coach brought a pedigree from Ohio State and hope.

Count a surprising win at the Rose Bowl against UCLA in this season's opener, a 21-0 whipping of Miami in the longest-lasting Division I college football rivalry west of the Alleghenies, and a 63-7 crushing of Alabama A&M and you suddenly have the happiest UC fan base since Brian Kelly’s team went 12-0 in 2009. Those Bearcats were ranked No. 3 in the BCS and only missed playing Alabama in the national championship game by a controversial last-second field goal that sent Texas instead.

"We're gaining that maturity to understand what it's going to take, to take [the program] to the next level." - @CoachFick
👇 Entire Tuesday afternoon presser👇 https://t.co/NibjyhJJkS pic.twitter.com/myHmUgwvvu

There’s no telling how long this fans' love affair with UC can go. UC could be 8-0 before it hits the hard part of its schedule in November against Navy, South Florida and Central Florida.

It’s just too bad Cincinnati can’t be as enthusiastic about the Reds, who are doomed to finish in last place for the fourth straight year.

And that also goes for Miami RedHawks fans, whose team is 0-3. They also need some cheering up.