Where will Cincinnati Bearcats go bowling after 10-2 season? 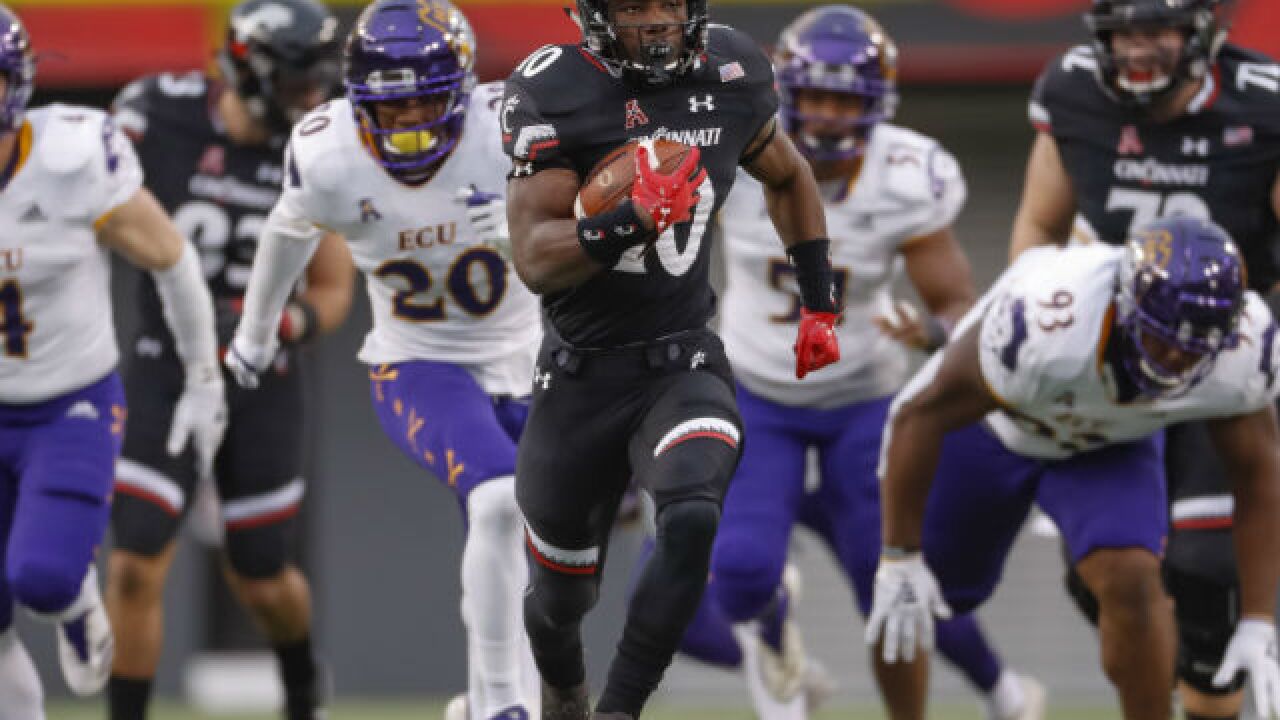 Image copyright 2018 Getty Images. All rights reserved. This material may not be published, broadcast, rewritten, or redistributed.
<p>CINCINNATI, OH - NOVEMBER 23: Charles McClelland #10 of the Cincinnati Bearcats runs for touchdown during the game against the East Carolina Pirates at Nippert Stadium on November 23, 2018 in Cincinnati, Ohio. (Photo by Michael Hickey/Getty Images)</p>

CINCINNATI  - Coming off a discouraging loss on national TV, the UC Bearcats bounced back and put the finishing touches on a 10-2 regular season with a 56-6 rout of East Carolina on Friday, turning fans' attention to this question:

Where will the Bearcats go bowling?

Predictions by college football experts are all over the map, but perhaps the most enticing is a New Year’s Eve matchup with Boston College or Duke in the Military Bowl in Annapolis, Maryland.

"The thing that's so gratifying is just to see the growth," Fickell said.

Alas, the Bearcats' turnaround won't get them a bowl on New Year's Day. But their explosive offense and sometimes dominating defense (three shutouts, six games allowing seven points or less) will make them attractive to TV.

Here are some projections for UC's first bowl game since 2015:

Bowl pairings will be announced after the four playoff teams have been selected on Sunday, Dec. 2.

UC will end up with the second best overall record in the American Athletic Conference, but that doesn’t mean it will get the second best bowl bid. Memphis, Houston, Temple (which beat UC) and South Florida (which lost to UC) are also in the mix.

Undefeated Central Florida is expected to get a bid to a New Year’s Six bowl should it win the conference championship game against Memphis next week. But neither is a sure thing if quarterback McKenzie Milton’s leg injury is serious.

The AAC also has bowl ties with the Boca Raton (Florida) Bowl and the Frisco (Texas) Bowl.

UC has an 8-9 record in bowl games. The Bearcats played in five straight bowl games between 2011-16, winning the first two and losing the last three. They last played in a New Year’s Day bowl in the 2009 Sugar Bowl, losing to Florida 51-24.

With star running back Michael Warren II sidelined by a shoulder injury, Fickell said he was concerned.

"It was kind of nerve-racking seeing how we'd be without (him)," Fickell said. "He's the catalyst for a lot of what we do offensively."

But it didn't mater. Freshman Charles McClelland and Tavion Thomas had TD runs of 55 and 2 yards, respectively. Backup QB Hayden Moore added a third-quarter TD pass to Lewis and Arquon Bush had a 36-yard pick-six in the fourth quarter.

Ridder got the rest of the game off after going 20 of 29 for 335 yards in the opening half. Lewis finished with nine catches for 203 yard and three scores.

The UC defense caused five turnovers and blanked the Pirates but for a 71-yard TD pass in the second quarter.