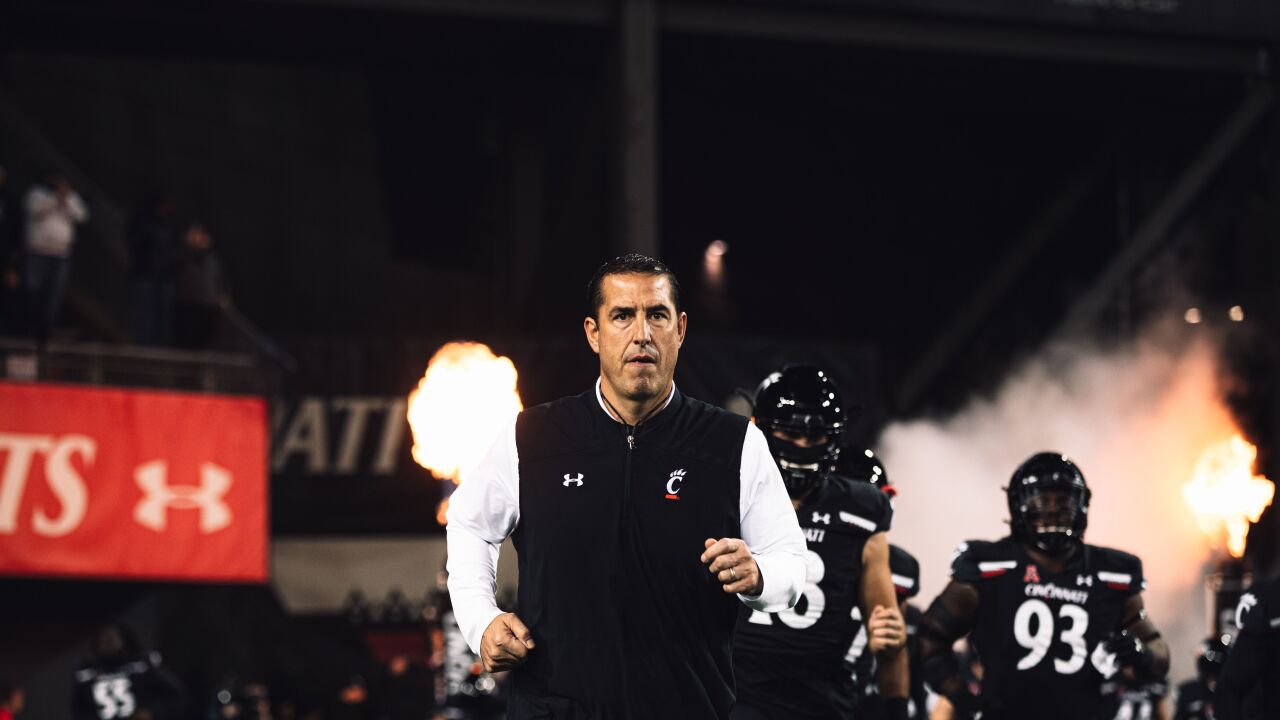 CINCINNATI — University of Cincinnati head football coach Luke Fickell hasn't given much thought to what Nippert Stadium may look like when the Bearcats open the season against visiting Austin Peay Sept. 3.

"What exactly is the season going to look like?" Fickell said Thursday morning. "What's that bubble going to look like? How many guys can you have on your sideline? Look, I'm worried about 122 guys that we've got right here, making sure their parents understand what it is that we're doing, what's the risks. Those are what we can control. There's a lot of higher-ups that are going to make some of those decisions about what the stadium is going to look like, and you can wear yourself out every single day worrying about as many things that are going on right now."

Fickell spoke with the players' families Wednesday night about the COVID-19 pandemic.

"I think anybody that's in this and plays this game and loves this game, has a passion for this game, understands there's risks involved in football," Fickell said. "We've seen for the last eight, 10 years where they talked about concussions. There is a risk in the game of football. We're willing to take risks.

"Not that they're risks that I believe are far greater than what we should be taking to play the game, and I feel the same way with what's going on with the pandemic and the virus. Yes, there is a risk."

On Wednesday, the NCAA Division I Council approved a model for football summer athletic activities and preseason practice.

The model gave instructions on what programs can offer for weight training, conditioning, meetings, walk-throughs and film review in July and early August.

Miami University football coach Chuck Martin said the players are just returning to the Mid-American Conference program campus. He's hopeful for the season, but he hasn't looked too far ahead.

"Anyone who is listening, if you want college football as much as I want college football, and probably a lot of people — social distance and wear a mask and help us out," Martin said. "Whatever your personal preference is — nobody wants to social distance or wear a mask — I'm on board with that. But for me, the smarter we can (be) as we start to reopen — which we're all doing, which we have to do — the smarter we can be, I think the better chance we have to not just (play) football but get back to our normal ways of life."

Fickell believes if a football team is not willing to take some of the risks, then it's not able to reap some of the rewards.

"At some point in time, we got to kind of stand up," he said. "We got to dance with the virus. We got to go ahead and put ourselves out there. You know, 9/11 happened a while ago, and for a while I'm sure a lot of people said, 'I'm never going to fly again.' Well, what's the reality behind that?

"Not that we want to throw ourselves in harm's way and say we're not ignorant enough to understand there's an issue out there. But, at some point in time you got to weigh what's most important, and what are you willing to risk in order to give you what it is that you want?"

Dr. Anthony Fauci, the director of the National Institute of Allergy and Infectious Diseases and a member of the White House task force on the virus, told CNN Wednesday that football "may not happen" this year.

Fauci said football teams would need to emulate plans for a bubble format this fall and that's similar to what the National Basketball Association and Major League Soccer is planning to do, according to ESPN.

"Unless players are essentially in a bubble — insulated from the community and they are tested nearly every day — it would be very hard to see how football is able to be played this fall," Fauci told CNN. "If there is a second wave, which is certainly a possibility and which would be complicated by the predictable flu season, football may not happen this year."

UC returns 16 of 22 starters on the offensive and defensive side of the ball, according to the school.

UC finished the season ranked No. 21 in all three major polls.

Miami University, which opens the season at Pittsburgh Sept. 5, won the 2019 Mid-American Conference championship. The RedHawks return 17 starters from 2019.