No. 25 Cincinnati takes down one Florida foe, one to go 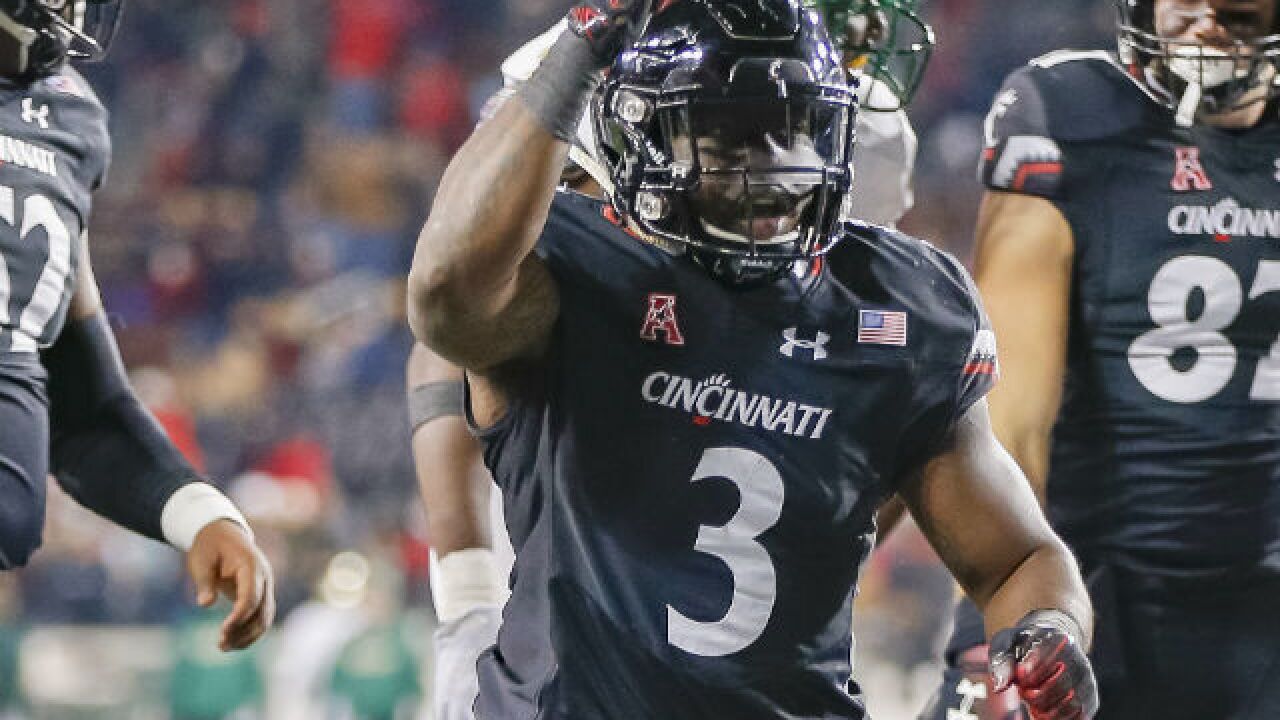 Image copyright 2018 Getty Images. All rights reserved. This material may not be published, broadcast, rewritten, or redistributed.
<p>CINCINNATI, OH - NOVEMBER 10: Michael Warren II #3 of the Cincinnati Bearcats celebrates a touchdown during the game against the South Florida Bulls at Nippert Stadium on November 10, 2018 in Cincinnati, Ohio. (Photo by Michael Hickey/Getty Images)</p>

CINCINNATI – Michael Warren II rushed for three third-quarter touchdowns and the No. 25 Cincinnati Bearcats pulled away to a 35-23 victory over the South Florida Bulls Saturday night at Nippert Stadium.

The win set UC (9-1, 5-1 AAC) up for a high-stakes clash at No. 11 Central Florida (9-0, 6-0) next Saturday with better bowl position and possibly a berth in the conference championship game riding on it.

That's heady stuff for a team coming off two 4-8 seasons. But UC entered Saturday's game off a 42-0 whipping of Navy, and once the second half rolled around, UC was in high gear again - thanks largely to Warren.

The sophomore running back caught a 13-yard scoring pass in the second quarter for the first of his four TDs, then scored on runs of 57, 1 and 1 in the third quarter as UC wiped out a 16-14 halftime deficit.

Coach Luke Fickell describes his running back as "built for November," and the Bearcats are leaning on him in their most important games.

"I don't know what to say about him," Fickell said. "Sometimes you're not sure he's going to be able to continue doing what he's done. His ability to do everything is what makes him special."

Warren set a school record with his 18th TD of the season.

"I wasn't aware," the sophomore said about his record. "I didn't even know what the numbers were."

His teammates know something special happens when he gets the ball. Warren has scored in all but one game this season.

Warren has run for 17 of his touchdowns, tying David Small's school record from 1993. Warren finished with 151 yards and became the school's 12th 1,000-yard rusher, its first since George Winn in 2012.

A pass interference call and a 14-yard Warren run set up his first short TD at 5:47. Desmond Ridder’s 43-yard pass to Rashad Mederis put UC at the USF 1 for Warren’s third TD run of the quarter at 2:06.

The UC defense rose up in the second half. The Bearcats allowed a 25-yard TD pass in the third quarter from Chris Oladokun to Tyre McCants but shut out USF after that.

USF scored first on a 72-yard pass from Oladokun to RyeShene Bronson just two minutes into the game. The PAT kick was blocked.

The lead switched hands twice again in the second quarter. First, Ridder’s 13-yard TD pass to Warren at 13:45, followed by Smith’s PAT kick, gave UC a 14-9 edge. But Brett Kern’s 38-yard pass to Mitchell Wilcox and the kick after made it 16-14 USF.

South Florida (7-4, 3-3) has lost three straight conference games for the first time since 2013. It didn't help that the Bulls were missing their prolific quarterback against the league's stingiest defense.

Blake Barnett hurt his shoulder during a 41-15 loss to Tulane. The Bulls waited until the end of the week to decide Barnett wouldn't be able to play.

His backups got a few big plays, but not much else.

"We watched Blake all week and hoped he'd get better, but by Friday we had to make a decision to go with the two quarterbacks," coach Charlie Strong said. "With what they were trying to do to us, we thought Chris could use his legs to make some plays to get out of danger. The quarterbacks played all right."

South Florida's defense wanted to show significant improvement after giving up 57 points — a school record — in a loss to Houston followed by 41 against Tulane. The Bulls were better for a half, but the defense was on the field a lot with the offense unable to move consistently.

Cincinnati accomplished its main goal — staying in the title chase. Now it's head-to-head for the East lead.

BABY IT'S COLD OUTSIDE

About 20 South Florida players warmed up shirtless, but some of them wore facemasks against the sub-freezing temperatures. Not to be outdone, about a dozen Bearcats also went topless during warmups. It was the Bulls' first game in sub-40-degree temperatures since a 31-6 loss at Rutgers on Dec. 7, 2013.

"Coach told us on Sunday, I believe, that we're coming out with our shirts off and setting the tone," Oladokun said. "We came out with great energy but in the second half we got a little flat."

Cincinnati lost to UCF 51-23 last year at Nippert Stadium in a game shortened by storms.