No. 19 Cincinnati Bearcats don't measure up in prime time 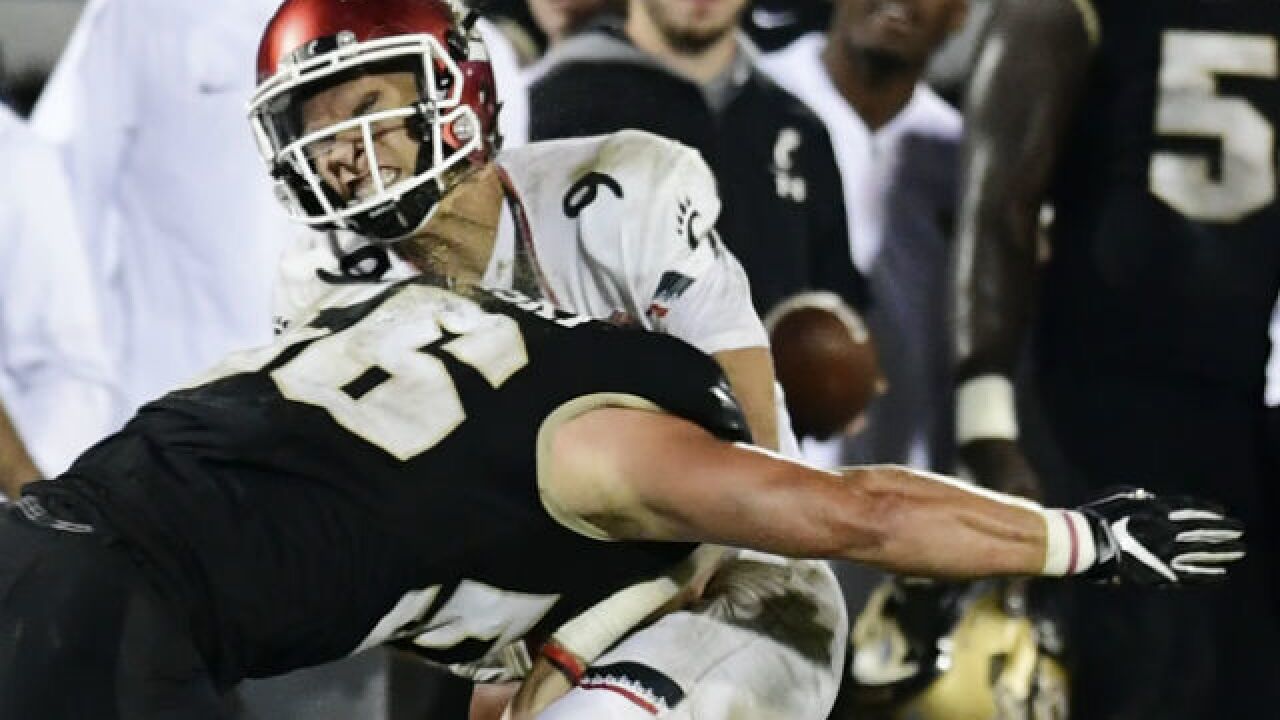 Image copyright 2018 Getty Images. All rights reserved. This material may not be published, broadcast, rewritten, or redistributed.
<p>ORLANDO, FLORIDA - NOVEMBER 17: Pat Jasinski #56 of the UCF Knights knocks the ball loose from Desmond Ridder #9 of the Cincinnati Bearcats during the third quarter on November 17, 2018 at Spectrum Stadium in Orlando, Florida. (Photo by Julio Aguilar/Getty Images)</p>

ORLANDO, Fla.  - The No. 19 Cincinnati Bearcats enjoyed their first five minutes in the national college football spotlight Saturday, but after that there was only misery.

"That was a tough one," UC coach Luke Fickell said. "The things that we pride ourselves on the entire year, in terms of playing complementary football, didn't happen tonight. There's not one finger to point. We have to play well in all three phases, and we didn't play well enough in any of the three phases tonight."

WATCH: WCPO's John Popovich sizes up the game from Orlando.

UC's offense didn't score until the fourth quarter against a dominating, hard-hitting UCF defense that sacked and pressured freshman quarterback Desmond Ridder all night and contained running back Michael Warren II. Give credit to Ridder, who never backed down and almost had his head knocked off when he took a vicious hit while forsaking a safe slide on a third-down run in the third quarter.

Ridder lost a fumble but somehow stayed in the game.

UC's brief high point came on UCF's first play from scrimmage, when linebacker Malik Clements blindsided Milton and forced a fumble, and defensive end Kimoni Fitz recovered in the end zone and put UC ahead with 10:33 left in the first quarter.

But then UC's kicking problems reared their ugly head.

Freshman Cole Smith not only missed the extra point, he missed two field goals in the first two quarters, robbing UC of its early momentum. Smith hooked a 38-yarder and then had a 41-yarder blocked and returned 53 yards to set up the first of Milton's two TD passes to Killins.

Smith has missed seven of 12 field goal attempts this season.

The Bearcats also wasted an opportunity to trim a 21-6 deficit when UCF's Titus Davis sacked Ridder, forcing a fumble after UC drove inside the Knights 20 in the final minute of the opening half.

"We generated some momentum early in the game and gave it right back to them, whether it was a missed field goal or extra point or something like that," Fickell said. "When you're playing the champs, when you're playing a team as good as they are, you can't have mishaps like that."

With UC trailing 35-7, freshman running back Tavion Thomas ran 28 yards to the UCF 1 and finished off a 75-yard  drive with a 1-yard TD for the offense's only points. Thomas showed flashes of speed and finished with 79 yards on 12 carries.

The going was tougher in the first three quarters before the outcome was sealed. Warren toughed out 81 yards on 18 carries and had three catches for 27 yards, but he failed to score a touchdown for only the second game this season.

Ridder, forced to scramble for his life, gained 70 yards on 20 carries until USF rushers started sealing him in the pocket. UC ended up with 252 yards on 55 carries.

It was UCF's 23rd straight win and just what the Knights wanted to impress the playoff selection committee. The primetime matchup capped a day in which Orlando became the epicenter of college football, with ESPN's "College GameDay" broadcasting from the UCF campus for the first time.

UC ends its regular season Friday against East Carolina at Nippert Stadium with a bowl berth already clinched. That - and a 10-win season - would mark a huge turnaround for a program coming off two 4-8 marks.

But that was no consolation to Fickell Saturday night.

SEE the game stats on ESPN.com.