No. 17 Memphis tops No. 18 Cincinnati, set for rematch 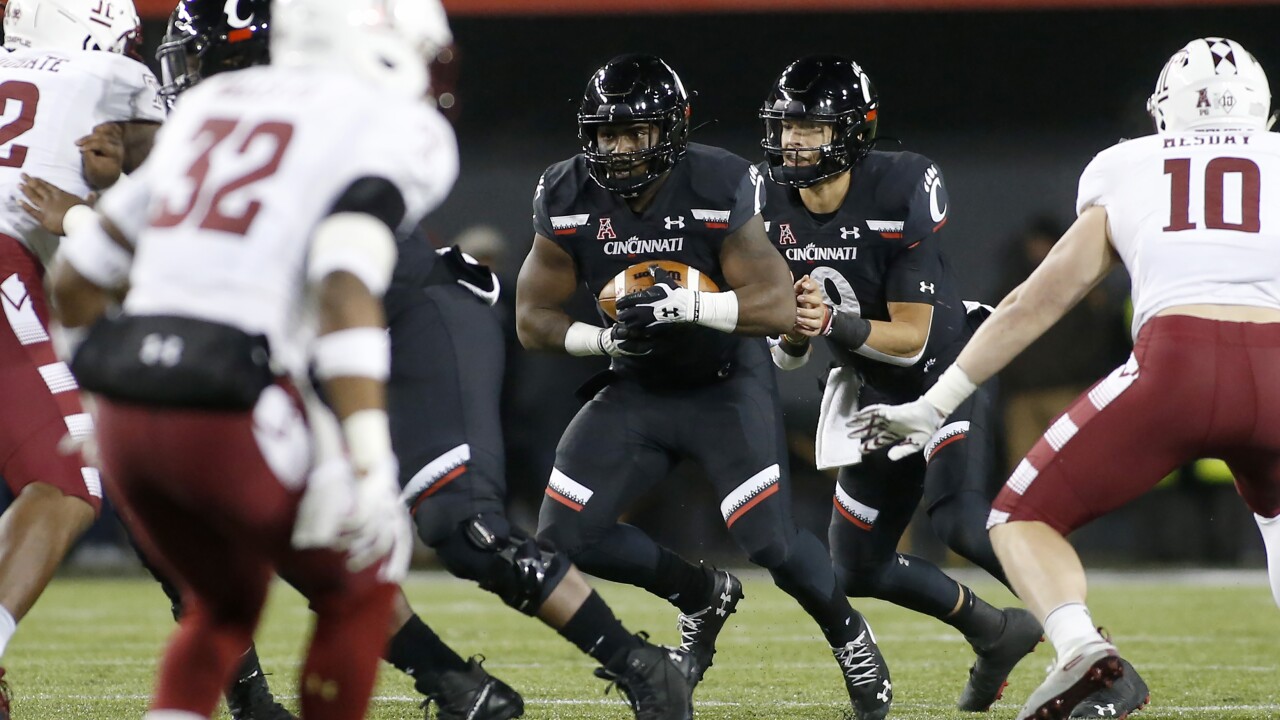 Brady White threw for 233 yards and two touchdowns and No. 17 Memphis beat 18th-ranked Cincinnati 34-24 on Friday for the Tigers’ third straight American Athletic Conference West title and the right to host the league championship — and the Bearcats again — next week.

And the league championship will be a rematch between these teams after Memphis snapped a nine-game winning streak by the East Division champs. Cincinnati (10-2, 7-1, No. 19 CFP) hadn’t lost since being routed by Ohio State on Sept. 7.

Joseph Dorceus and Bryce Huff had two sacks apiece, and Memphis finished with five. The Tigers came up with three turnovers, including an interception by Sanchez Blake Jr. with 1:35 left.

Memphis also forced Cincinnati three-and-out after Ahmad Gardner intercepted White with 7:49 left with the Tigers up only 27-24.

The Tigers led only 20-17 when they put together their longest drive, going 83 yards over nine plays capped by a flea flicker. Patrick Taylor took the handoff, handed to Kedarian Jones who flipped the ball to White, and he hit Damonte Coxie for a 46-yard TD with 13:22 left.

Antonio Gibson scored on a 29-yard TD run with 3:16 left for the final margin for Memphis.

LINCOLN, Neb. (AP) — Keith Duncan kicked a 48-yard field goal with a second left to lift Iowa past Nebraska and keep the Cornhuskers out of the postseason for a third consecutive season.

The Hawkeyes (9-3, 6-3 Big Ten) overcame a sluggish second half offensively to beat the Cornhuskers (5-7, 3-6) for a fifth straight year and second year in a row on a late field goal. Last year, they won on a 41-yarder as time expired.

Iowa, which had its 14-point lead wiped out in the third quarter, started its final possession at its 26 with 32 seconds left. Stanley had a long pass to Nico Ragaini overturned to incomplete on video review, but then completed a pair of 22-yard passes to Ihmir Smith-Marsette and Sam LaPorta to bring on the reliable Duncan.

The Huskers called two timeouts before Duncan drilled the winner down the middle,

Nebraska, down 24-10 at half, tied it with back-to-back touchdowns in the third quarter. Luke McCaffrey entered the game for a play in place of quarterback Adrian Martinez, rolled to his left and hit JD Spielman with a perfect 39-yard TD pass.

Iowa’s Kirk Ferentz moved ahead of the man he replaced, Hayden Fry, on the Big Ten list for career conference wins. Ferentz has 97, behind only Ohio State’s Woody Hayes (153), Michigan’s Bo Schembechler (143) and the University of Chicago’s Amos Alonzo Stagg (115).

Henderson ran for a short score early in the fourth to give Boise State some breathing room. He also threw two TD passes, giving him eight over the past three games as he fills in for banged-up starter Hank Bachmeier and backup Chase Cord.

Garrett Collingham hauled in one of Henderson’s TD passes and ran in another as the Broncos head into the league’s championship game with a head of steam. They host Hawaii on Saturday.

TROY, Ala. (AP) — Zac Thomas passed for 326 yards and four touchdowns and rushed for a fifth score to lead Appalachian State past Troy in the regular-season finale.

The win assured the Mountaineers (11-1, 7-1 Sun Belt Conference) of hosting the league title game against Louisiana next Saturday.

Thomas, Darrynton Evans, Thomas Hennigan and others all delivered big plays for Appalachian State, which reached the end zone on each of its first five possessions against the Trojans (5-7, 3-5).

Thomas was 28-of-34 passing with his final attempt a 25-yard scoring strike to Evans to start the fourth quarter. He had a 12-yard touchdown run.

CHARLOTTESVILLE, Va. (AP) — Bryce Perkins put up 475 yards of offense, Brian Delaney kicked a go-ahead 48-yard field with 1:23 to play and Virginia sealed it with a defensive score, beating Virginia Tech to end a 15-game losing streak in the rivalry and earn the Cavaliers’ first trip to the ACC championship game.

Virginia will represent the Coastal Division against No. 3 Clemson in the ACC championship next Saturday in Charlotte, North Carolina.

Perkins ran for two long touchdowns and passed for another for the Cavaliers (9-3, 6-2), who became the seventh school in as many years to claim the Coastal Division. Delaney also kicked a 25-yard field goal for Virginia, and his last kick made up for a missed extra point early.

Hendon Hooker ran for one touchdown and threw for another for the Hokies (8-4, 5-3), who came in having won six of seven games to surge into championship contention.