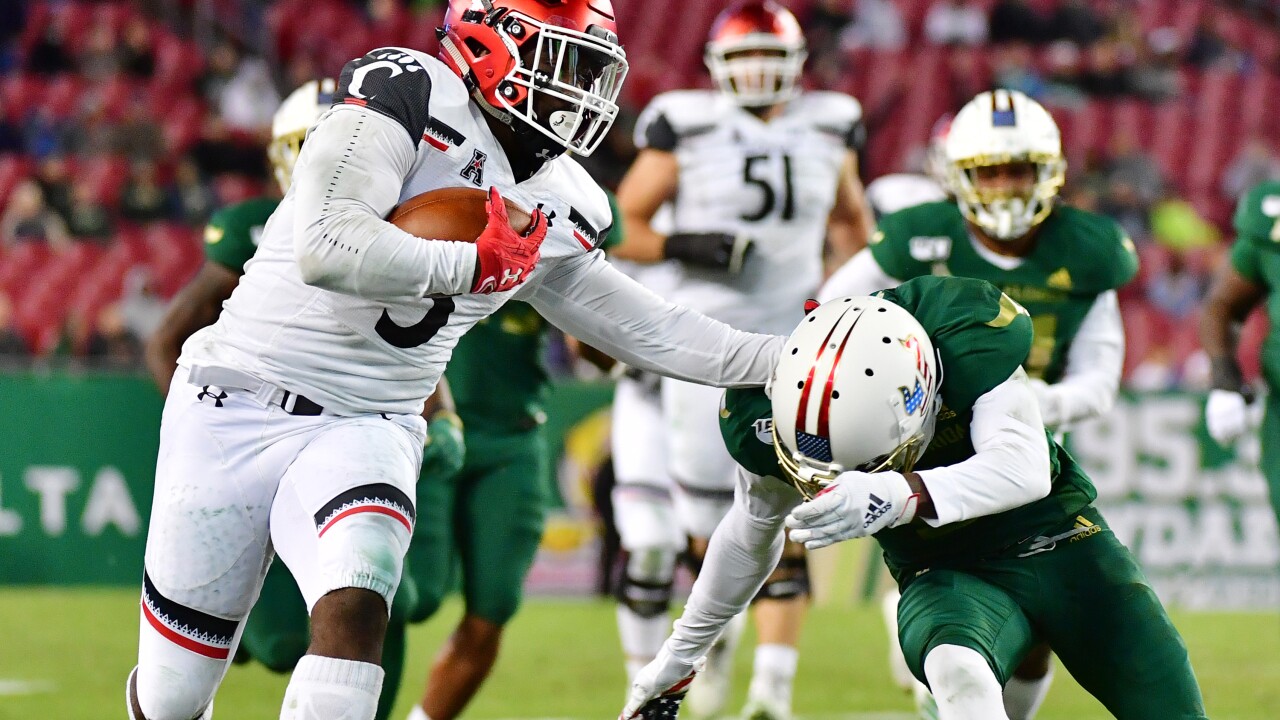 Sam Crosa kicked a 37-yard field goal as time expired Saturday night, giving the Bearcats a 20-17 victory over South Florida and at least a share of the American Athletic Conference East division title.

It was Crosa’s second field goal of the game, as well as the second winning kick with no time remaining in the past three weeks.

“It's a feeling I really can't describe ... a really, really good feeling. That's all I can say,” said Crosa, who also booted a 32-yarder to keep the Bearcats unbeaten in conference play two weeks ago at East Carolina.

Teammates rushed from the sideline in celebration, and the party extended to the locker room.

“Just like after ECU, another big win for us. The whole team just really coming together and doing their job in the second half,” Crosa said. “I'm just happy I can do my part a little bit and get the job done for us."

The Bearcats (8-1, 6-0, No. 17 CFP) rallied from a 10-point halftime deficit to win for the eighth straight time, getting touchdown runs from Michael Warren and Gerrid Doaks before Desmond Ridder led an 11-play, 60-yard drive to win the game.

USF’s Spencer Shrader missed a 33-yard field goal that would have given the Bulls (4-6, 2-4) the lead with 2:07 remaining. The freshman’s fourth miss of the night hit the right upright and bounced away.

“There’s no blame for anyone,” Bulls coach Charlie Strong said. It’s just one of those losses that’s a team loss.”

Ridder was just 9 of 18 passing for 78 yards, but he had a pair of big third-down completions on the winning march — the last a short flip to Warren, who rambled 30 yards to the USF 40. Warren ran for 11 yards on the play and finished with 134 yards rushing on 26 carries.

Jordan McCloud threw for 267 yards and one touchdown for USF, which led 10-0 at halftime. The Bulls clung to a 17-10 advantage entering the fourth quarter, but couldn’t put the Bearcats away.

Cincinnati pulled even on Warren’s 2-yard TD run with 14:26 to go, but wasted an opportunity to pull away from the 17-17 when a holding penalty nullified Doaks’ 50-yard run to the USF 1.

“It's unbelievable, that group of guys in there,” Cincinnati coach Luke Fickell said. “When you can go out there and not have your best, meaning the first half just not playing, nothing clicking. To find a way on the road ... we needed to find a way to all pull together. When those guys believe in each other, they're very hard to beat."

The Bearcats, who rallied from a 12-point fourth-quarter deficit to beat East Carolina 46-43, have had a penchant for performing up or down to the level of opponents this season — struggling against weaker conference foes they figured to dominate while playing their best in games considered to be tougher matchups.

This one was ugly from the start, with Cincinnati’s offense helping to dig an early hole with three false starts and a delay of game penalty, and the defense giving up a 55-yard pass play that set up South Florida first touchdown. If not for an offensive pass interference call that wiped out Bryce Miller’s 22-yard TD catch and Shrader missing field goals of 50, 53 and 43 yards in the second quarter, the Bearcats’ 10-point halftime deficit would have been larger.

“Every loss hurts, no matter the score. This one hurts really bad because we thought we had them,” McCloud said.

“Cincinnati being ranked as high as they are, we feel like we can play with everybody,” the freshman quarterback added. “We know when we play our best that we can compete vs. any team, especially in our conference."

Cincinnati: A week after scoring on seven of their first eight possessions to roll to a 38-0 halftime lead against UConn, the Bearcats were limited to 46 yards on 27 plays in the first two quarters. They were shut out in the first half for the first time since Week 2, when they were beaten 42-0 at Ohio State.

South Florida: The Bulls have rebounded from a 1-3 start to climb within striking distance of bowl eligibility. To get to six wins, they’ll have to upset No. 18 Memphis at home next week and then go on the road and defeat UCF in the regular-season finale.

The Bearcats are the highest-ranked Group of Five team in the nation, which has them in a prime position to earn a spot in a New Year’s Six bowl.

Cincinnati: Returns home to face Temple on Saturday, with a win giving the Bearcats the East Division title outright.

South Florida: Hosts Memphis in home finale Saturday, hoping to play spoilers in the West Division race and stay in the running to become bowl eligible.