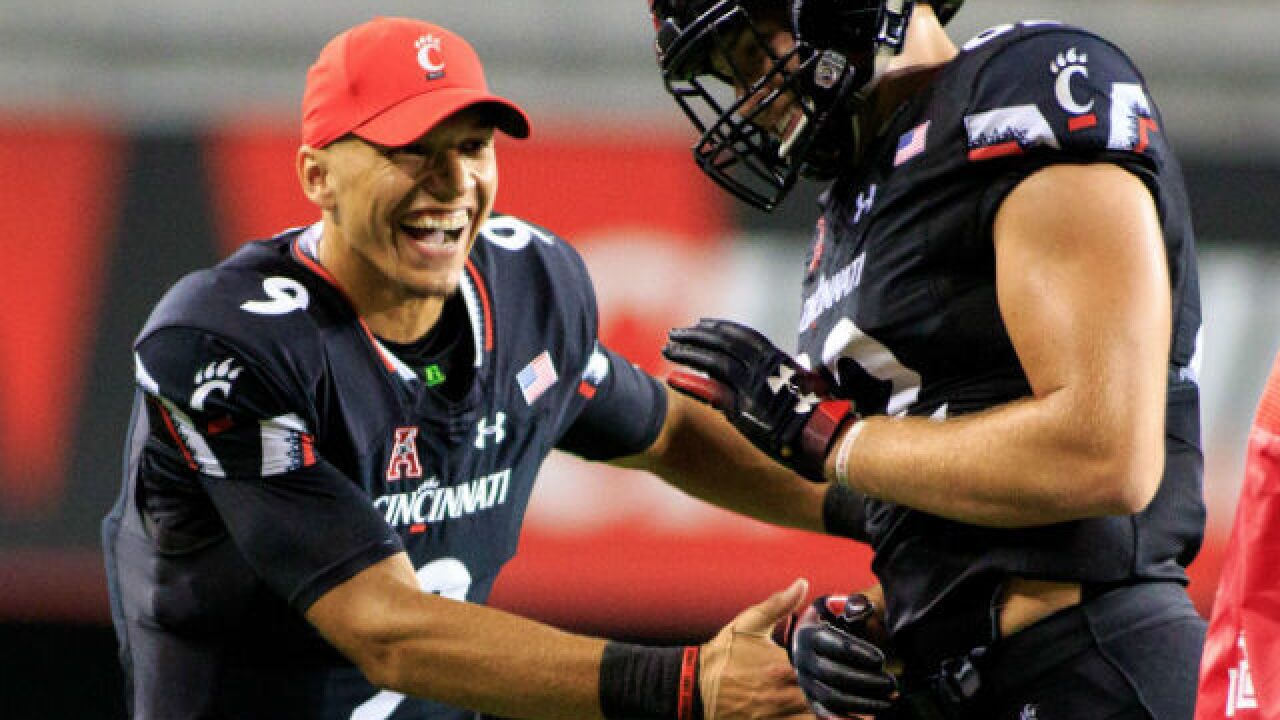 Image copyright 2018 Getty Images. All rights reserved. This material may not be published, broadcast, rewritten, or redistributed.
<p>CINCINNATI, OH - SEPTEMBER 15: Desmond Ridder #9 of the Cincinnati Bearcats celebrates with his teammate in the game against the Alabama A&M Bulldogs at Nippert Stadium on September 15, 2018 in Cincinnati, Ohio. (Photo by Justin Casterline/Getty Images)</p>

CINCINNATI -  The University of Cincinnati football wasted no time establishing the upper hand in its home opener. The Bearcats had a little fun doing it, too.

After relying mainly on the running game in its first two victories, Cincinnati came out slinging against Alabama A&M on Saturday and caught the visiting Bulldogs on their heels.

UC passed on four of its first five plays. The game plan couldn’t have been scripted better, as the Bearcats set a school record for most yards in a game and rolled to a 63-7 win at Nippert Stadium.

UC, now 3-0, finished with 741 yards of offense to break the record of 711. The game served as an opportunity for a lot of guys to get playing time.

“The most impressive thing, I told the guys, was it didn’t have to be like this,” UC coach Luke Fickell said. “I’ve been fortunate enough to be in a lot of situations where you go into a game where you’re better than somebody and the game comes out like it probably should, but it doesn’t always go that way from the get-go. What we’re starting to see is some maturity in what we’re doing. … I think tonight we took a step.”

Redshirt freshman quarterback Desmond Ridder connected with Kahlil Lewis on an 18-yard pass to open the Bearcats’ first drive, and that set the tone after the defense stopped the Bulldogs on the opening possession. Four plays later, he quickly got UC on the board with a 29-yard touchdown pass to Thomas Geddis, who displayed some acrobatics in making the catch over his defender in the back of the end zone.

The rest of the first quarter was much of the same. The defense made stops. The offense cruised.

Ridder had a 356.2 quarterback rating for the period, and his second touchdown pass was as impressive as the first -- a 61-yard bomb to a wide-open Lewis, who caught the ball well behind two defenders around the 15-yard line.

“The first two games it was obviously tough to throw the ball,” Ridder said. “UCLA, they pressured us a lot, so it was tough to get time to throw the ball, and last week against Miami (with just 11 pass attempts), the rain made it very tough. But this week we had perfect conditions. We knew we were going to come out and throw it a lot, and that’s what we did.”

“It was a big quarter for me,” Ridder added. “I was very excited for me and my team to get out to that early start.”

Moore replaced Ridder in the second quarter, and while he was efficient in guiding the offense to a 42-0 halftime lead, it is clear Ridder has earned the trust of the team. Ben Bryant came in for the third quarter, and Jake Sopko played the fourth quarter.

Lewis called Ridder “a competitor” and said the future is bright with him. Fickell said he had already had confidence in Ridder going into the home opener, but he cleared an important hurdle in being able to show his passing ability in a game.

“I think the unique thing is that Desmond has a lot of confidence in himself,” Fickell said. “That’s one of those things you just never know as a guy starts his career and starts to blossom a little bit. You see it but you’re kind of curious until those lights come on and you get some of those opportunities. It’s not perfect, but as those guys get confidence in what they do with their arm and gain confidence in the guys they are throwing to, I think that’s the next step we’re going to.”

The dominant aerial attack eventually gave way to the run, as expected in a blowout, but UC had 107 yards rushing through the opening quarter before really turning to the ground game, which produced 191.0 yards per game the first two weeks.

Sophomore starter Michael Warren added his sixth rushing touchdown of the season – his five through the first two games tied for a national lead – and freshman Tavion Thomas added one from 11 yards out for the only other score of the second period.

Warren finished with 78 yards on six carries with a long run of 32 yards, and Thomas had a game-high 141 yards and two touchdowns on 18 carries. Freshman Charles McClelland added 121 yards and one touchdown on 16 rushes.

“The way we were firing on all cylinders from the start, making some plays, that’s what it’s all about was just getting some momentum,” Fickell said.

All the while, the defense kept doing its thing. A&M recorded just 81 yards of offense and three first downs by halftime (UC had 25 first downs and 529 yards) and didn’t get on the board until 3:57 left in the third quarter, ending the Bearcats’ string of seven straight quarters without giving up a score. UC was tied for seventh nationally in fewest points allowed (8.5 per game) entering Saturday.

As solid as the defense was, the Bearcats had just one takeaway. Linebacker Perry Young picked up sophomore backup defensive tackle Elijah Ponder’s forced fumble and returned it 27 yards to set up Cincinnati’s only score in the third quarter. McClelland ran it in for his first career touchdown. It was UC’s first fumble recovery of the season, as the team’s only takeaways in the first two games came on a pair of interceptions.

“Sometimes you start to get in situations where you start to do too much, you get antsy and over-aggressive,” Fickell said. “We just have to make sure to continue to do what we do well. … But, there’s some confidence developing on that defensive side of the ball, too.”

Cincinnati remains home in Week 4 when it hosts Ohio University on Sept. 22 before opening American Athletic Conference play at UConn on Sept. 29.