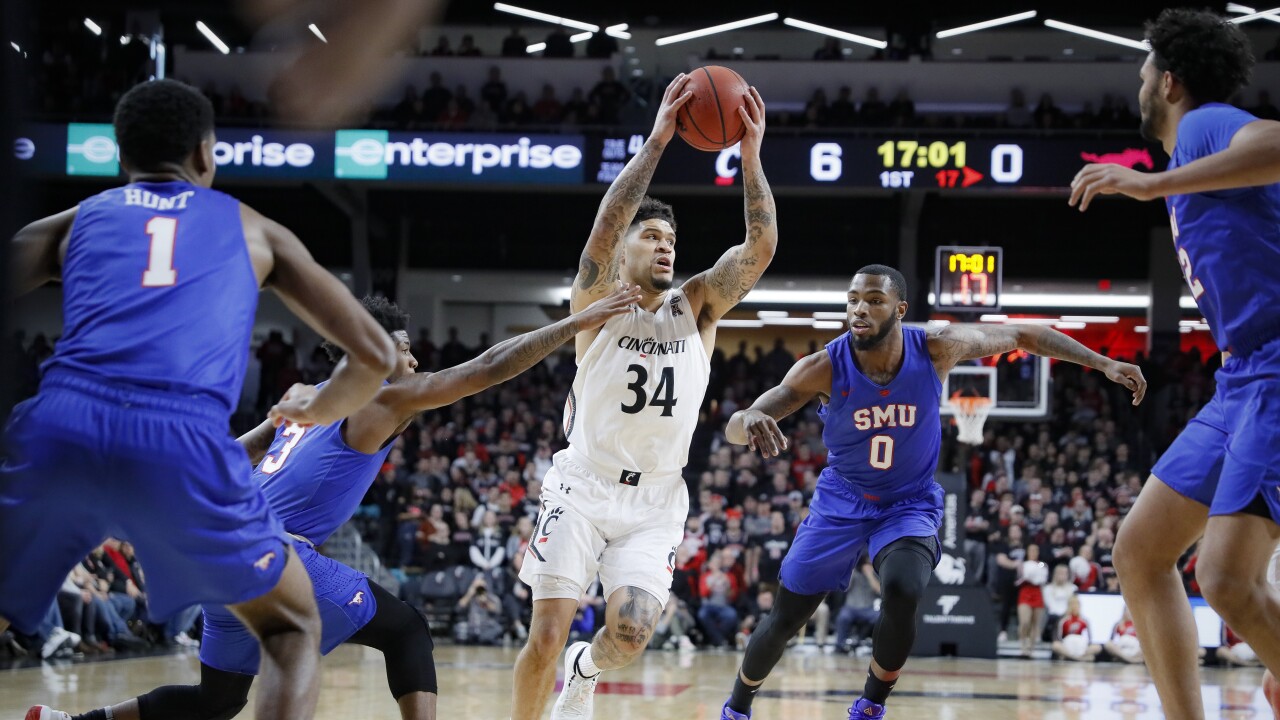 (Copyright 2020 The Associated Press. All rights reserved. This material may not be published, broadcast, rewritten or redistributed.)
John Minchillo/AP
Cincinnati's Jarron Cumberland (34) drives against SMU's Kendric Davis (3) and Tyson Jolly (0) during the first half of an NCAA college basketball game Tuesday, Jan. 28, 2020, in Cincinnati. (AP Photo/John Minchillo)

CINCINNATI — Jarron Cumberland scored a season-high 28 points Tuesday night, and Cincinnati led the whole way during a 65-43 victory over SMU, its seventh straight win over the Mustangs.

The Bearcats (13-7, 6-2 American Athletic) have won five of six with Cumberland leading the way. He had 15 points in the first half, when Cincinnati led by as many as 17 points. Cumberland finished 9 of 13 from the field, and had team highs with nine rebounds and four assists.

The Mustangs missed 10 of their first 11 shots as Cincinnati pulled ahead 16-3 and was never seriously threatened.

Cumberland was coming off his best half of the season. He scored 21 of his 22 points in the second half Wednesday, leading the Bearcats to an 89-82 win at Temple. He was the catalyst again as the Bearcats took control.

The Mustangs trailed 33-19 at halftime, their fewest points in an opening half this season, and shot only 24 percent from the field. Cumberland scored nine consecutive points for Cincinnati, including a pair of steals and layups.

The Bearcats pushed the lead to 24 points midway through the second half. The Mustangs have overcome double-digit deficits to win games this season, but their poor shooting prevented a comeback.

They came into the game leading the AAC in field goal percentage at 46.6%. SMU couldn't handle Cincinnati's tight defense and shot a season-low 25.9% from the field while scoring a season low in points.

SMU: The Mustangs made an impressive finish to pull off that win at Memphis, closing the game with a 15-0 run. They came out sloppy against Cincinnati and never recovered, dooming their chances for another notable road win.

Cincinnati: The Bearcats have shown improvement the last few weeks with Cumberland rounding into form after missing time with ankle and hip injuries and a one-game benching. Cumberland has scored at least 19 points in three of the last four games.

SMU hosts Tulane on Saturday. The Mustangs play at Tulane on Feb. 19.

Cincinnati hosts No. 21 Houston on Saturday. The Bearcats play at Houston on March 1.