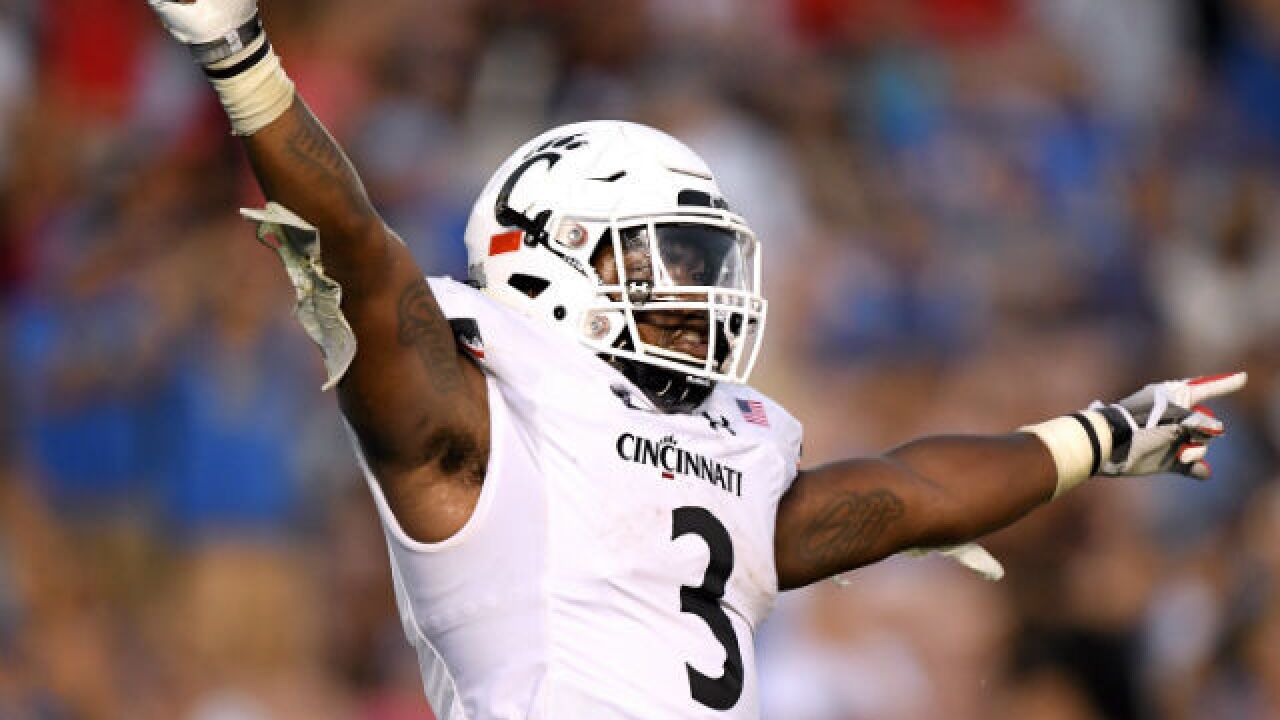 Image copyright 2018 Getty Images. All rights reserved. This material may not be published, broadcast, rewritten, or redistributed.
<p>PASADENA, CA - SEPTEMBER 01: Michael Warren II #3 of the Cincinnati Bearcats reacts to his third touchdown of the game to take a 26-17 lead over the UCLA Bruins during the fourth quarter at Rose Bowl on September 1, 2018 in Pasadena, California. The Bearcats would win 26-17. (Photo by Harry How/Getty Images)</p>

Cincinnati (2-0) used a stout defense to keep Miami (0-2) off the scoreboard and retain the Victory Bell in the oldest rivalry west of the Allegheny Mountains.

Steady rain held down the passing game for both teams and Miami found little running room with 59 yards.

"The weather dictated things," Miami coach Chuck Martin said. "We talked about how critical it would be to get the lead. We knew that whoever got the lead would have the advantage. The opportunities were limited for both teams. They made more out of their opportunities. We didn't make the best of ours. It played out like we thought."

Cincinnati was able to score on a 2-yard, first-quarter plunge by Warren, who scored all three touchdowns in Cincinnati's 26-17 win against UCLA at the Rose Bowl last week.

"I knew with the rain we were going to run it and they would load the box," Warren said, who had just 31 yards rushing at halftime. "I started to get into a rhythm in the second half."

Ridder capped the scoring with his first career touchdown pass to Josiah Deguera for 9 yards.

"It was very exciting," Ridder said. "Josy is one of my best friends. When it hit his hands, I got so excited."

Warren scored his fifth touchdown of the season with a 1-yard plunge in the fourth quarter.

Miami quarterback Gus Ragland threw an interception on a tipped pass to set up Warren's second score. Darrick Forrest picked off a pass intended for Jack Sorenson to set up the insurance score.

Ragland faced a relentless pass rush in the fourth quarter and completed 22 of 41 passes for 139 yards.

"We talked about what this rivalry is all about," UC coach Luke Fickell said. "The 120-some-year history of the rivalry. It's about respect, for the game, for your opponent and the way you prepare. We had adversity we had this week, getting back at 6 in the morning (from Los Angeles). They respected it and prepared all week."

Cincinnati is playing with 17 redshirt freshmen and 35 true freshmen.

Despite a slick football, there was just one turnover and that was a tipped pass that was intercepted by Cincinnati.

Miami: Ragland, the senior quarterback from Moeller High School, took over the job when the Redhawks were 0-6 in 2016 and led them to six straight wins and a bowl game against Mississippi. Since then the Redhawks are 5-10 including the loss in that bowl game.

Cincinnati: Will host Alabama A&M on Saturday. The Bearcats will be the last team in the AC to play a home game.

Miami: Will travel to Minnesota on Saturday, the first of two straight road games.