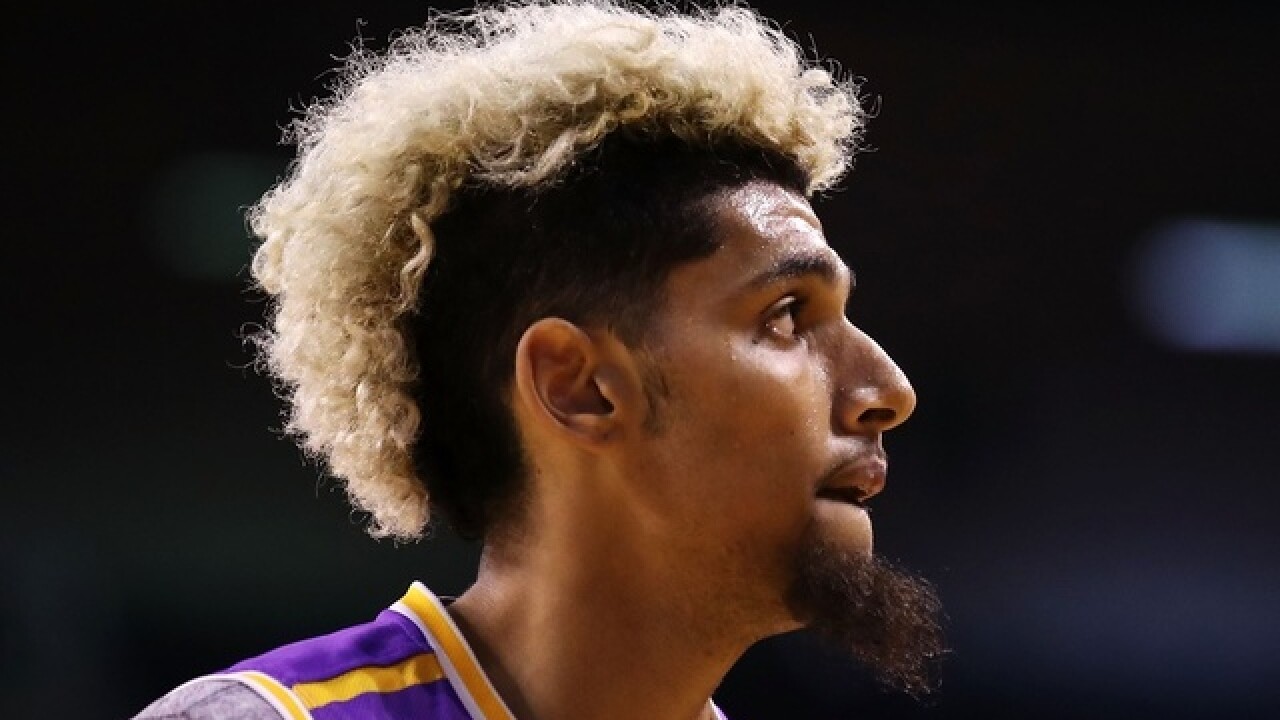 Image copyright 2018 Getty Images. All rights reserved. This material may not be published, broadcast, rewritten, or redistributed.
Mark Kolbe
<p>WOLLONGONG, AUSTRALIA - SEPTEMBER 16: Brian Bowen of the Kings watches on during the NBL pre-season match between the Illawarra Hawks and the Sydney Kings at WIN Entertainment Centre on September 16, 2018 in Wollongong, Australia. (Photo by Mark Kolbe/Getty Images)</p>

NEW YORK (AP) -- When Brian Bowen Jr., one of America's brightest high school basketball stars, announced in June 2017 that he would attend the University of Louisville, a school that had not been on anyone's radar as his possible destination, sportswriters called it a coup that "came out of nowhere." Louisville coach Rick Pitino agreed.

In a trial that began Monday, federal prosecutors will argue that the signing wasn't luck at all but the result of a payoff to Bowen's father.

Former sports agent Christian Dawkins, former Amateur Athletic Union coach Merl Code and former Adidas executive James Gatto have all pleaded not guilty to charges they plotted to pay Bowen's father $100,000 in exchange for his son's promise to commit to Louisville. A jury was being selected Monday with opening statements set for Tuesday.

It is the first trial related to an FBI investigation that exposed the sleazy side of big money in college basketball and led to charges against multiple people involved in making payments to student athletes. Other defendants, including former assistant coaches from Arizona, Auburn, Southern Cal and Oklahoma State, face separate trials.

Neither Bowen, now 19, nor his father, Brian Bowen Sr., has been charged. Nor has Pitino, who was fired by Louisville along with athletic director Tom Jurich after the investigation became public.

The indictment says Adidas played a role in helping lure star players to its affiliated teams and keep them from going to teams sponsored by competitors like Nike. It also includes allegations that recruiters talked about using money from Adidas to pay two other families of prized high school basketball recruits, besides Bowen.

Lawyers for the defendants say any recruiting issues should have been the NCAA's problem, not fodder for a federal prosecution.

In one episode central to the case, investigators recorded a meeting at a Las Vegas hotel in which Dawkins met with an assistant coach at Louisville and the director of an amateur team to talk about making backdoor cash payments to players, with the expectation that he could manage their business affairs once they turned professional.

The men didn't know that another person in the room was an FBI informant.

At the meeting, Dawkins was overheard warning how an Adidas competitor was "coming with a higher number" for Bowen's family, the criminal complaint said. It said he also claimed he'd been in touch with the Louisville head coach about how to come with more money.

Prosecutors say the defendants settled on a plan to pay the Bowen family four $25,000 installments, with the money coming from Adidas, but disguised by routing it through an amateur team run by Merl Code.

They contend that the secret payments defrauded colleges because Bowen and other young athletes would not have qualified for generous scholarships if they were known to have accepted outside payments. Also, the basketball programs might have to forfeit games or lose tournament eligibility if they were found to have used ineligible players.

The defendants, they wrote in a recent court filing, "were not trying to cause financial harm to these schools, but rather were trying to help them recruit a great basketball team that would bring in millions of dollars in revenue and bolster their national reputation."

Prosecutors haven't ruled out calling recruits or their family members as witnesses. And it's likely that Pitino's name will come up in testimony at a trial expected to last at least three weeks.

While the case has generated headlines, college basketball largely remained business as usual last season. No teams were declared ineligible for the NCAA Tournament.

Bowen, who has not been accused of having any personal knowledge of payments to his family, may have suffered more than anyone associated with the case so far.

Louisville suspended him before he ever played a game. He transferred to the University of South Carolina, but after it said he couldn't play this season, he signed with a professional team in Australia, effectively ending his college career and dimming his hope of playing in the NBA.

Pitino has insisted there was nothing suspicious about how the teenager was recruited.

"Some people will believe it, some people won't," Pitino told The Associated Press in a recent interview. "That I don't care."