Job may be in jeopardy 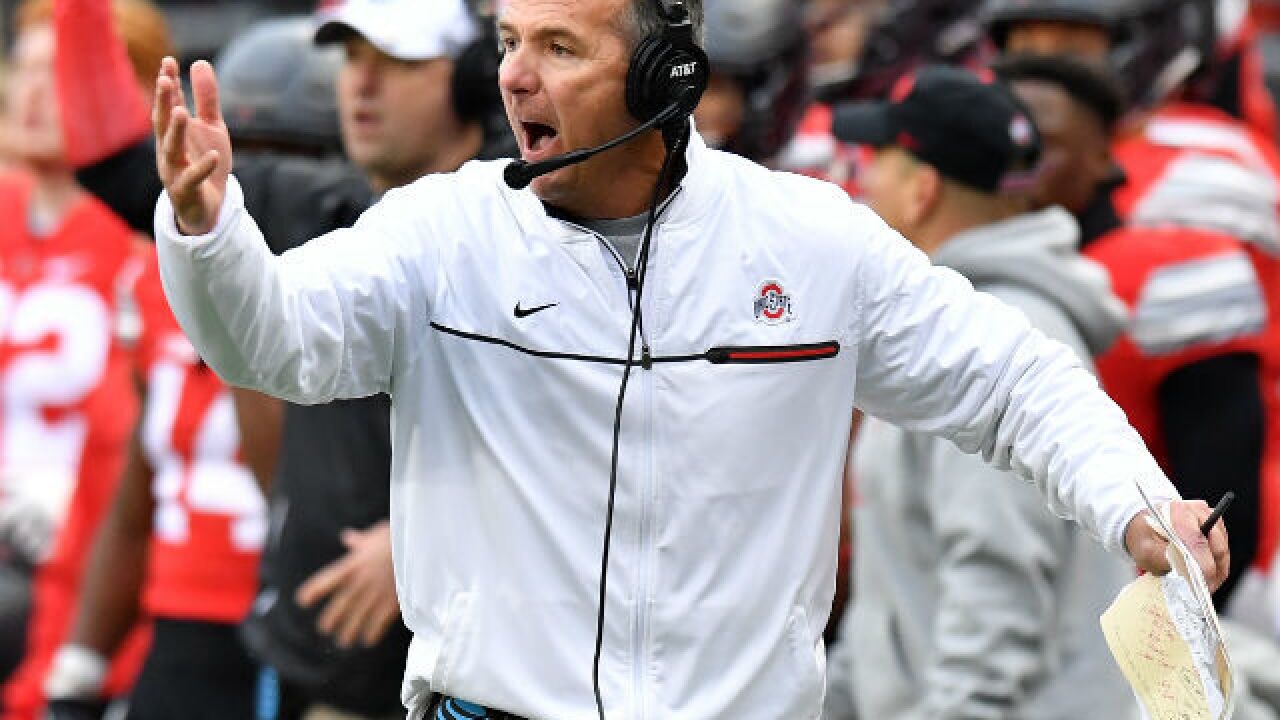 COLUMBUS, Ohio -The college football world was rocked Wednesday by a report Urban Meyer knew more about a domestic violence complaint against one of his assistants than he had admitted.

By the time the sun went down, Ohio State had put its football coach on paid administrative leave pending further investigation.

Here is what you need to know to get caught up on the story:

1. The story originates from an incident in 2009 between a Meyer protege and his then-girlfriend.

Zach Smith, a former Bowling Green player for Meyer who joined his staff at Florida in the late ‘00s as a graduate assistant, was accused of violence against his pregnant girlfriend in Gainesville.

Meyer acknowledged that along with his wife, Shelley, he provided counseling for the couple, who eventually got married and had two children.

2. Another alleged incident in 2015 is the catalyst for the current controversy.

McMurphy relayed texts between the two women as well as texts between Courtney Smith and the wife of another OSU staffer indicating Urban Meyer had talked to Zach Smith about the abuse.

However, McMurphy said during an appearance on ESPN late Wednesday night he had no direct evidence Meyer was told of the 2015 allegations.

In an interview with Stadium, Courtney Smith said Shelley Meyer had told her she would have to tell her husband, but Smith was unaware if that actually happened.

That stemmed from a disagreement over where the couple would exchange their son on May 12.

When it became public, Smith was terminated.

He faces an Aug. 3 court date in Delaware County (northern Columbus suburbs) regarding that charge.

Cleveland.com obtained nine reports from Powell, Ohio, police filed between Jan. 1, 2012 and late July, none of which resulted in charges being filed until the May 12 incident.

4. Urban Meyer explained July 24 what he knew and when.

In a previously scheduled appearance at Big Ten Media Days in Chicago, Meyer said he knew of the 2009 incident but not of 2015. Furthermore, he reported being told by staffers who looked into the latter event that nothing happened.

That statement has been the source of controversy this week in the wake of McMurphy’s report.

According to McMurphy, records from the Smith’s divorce were sealed until Wednesday morning at the request of Zach Smith, who wished to protect his employment.

Courtney Smith told Stadium she had told the families of the former couple about the abuse she suffered but was encouraged not to involve law enforcement.

Several hours after McMurphy’s report and the publication of Courtney Smith’s interview with Stadium, Ohio State announced Meyer had been placed on paid administrative leave.

The Buckeyes are set to begin preseason practice Friday afternoon with Ryan Day, the team’s quarterbacks coach and one of its offensive coordinators, serving as the interim head coach.

How long the investigation of this matter will go is unknown.