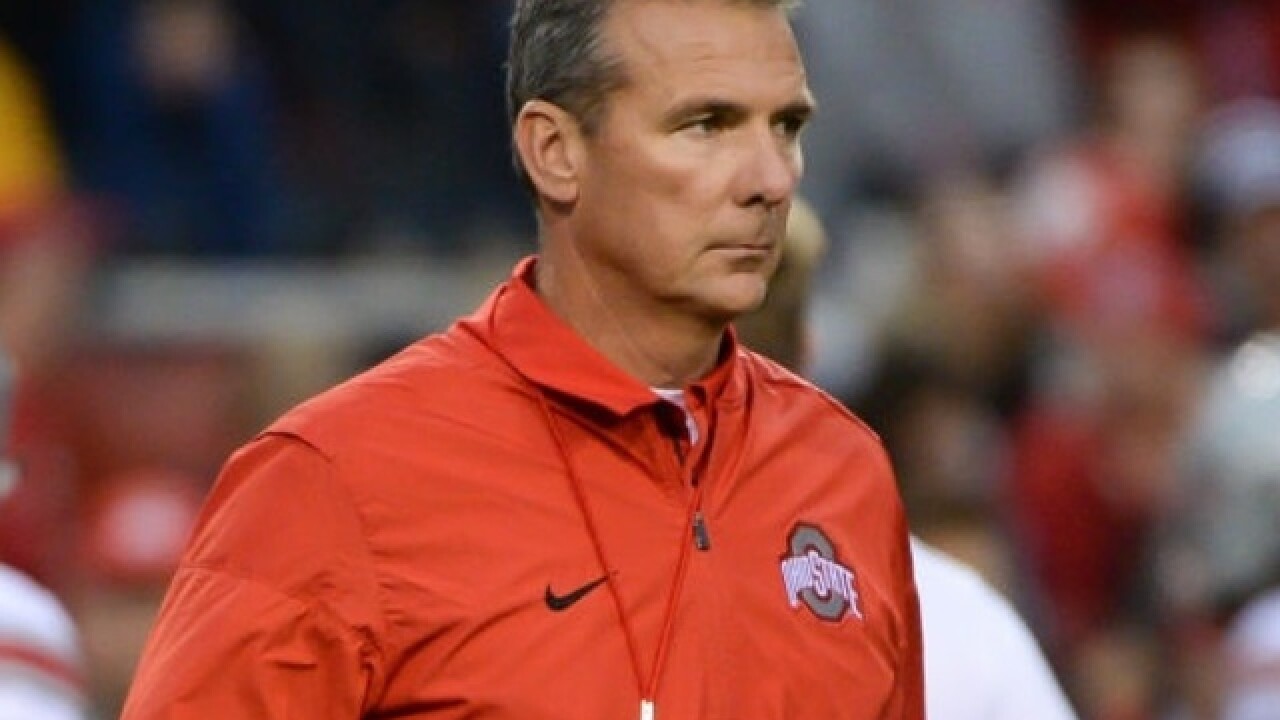 Image copyright 2017 Getty Images. All rights reserved. This material may not be published, broadcast, rewritten, or redistributed.
Steven Branscombe/Getty Images
<p>LINCOLN, NE - OCTOBER 14: Head coach Urban Meyer of the Ohio State Buckeyes before the game against the Nebraska Cornhuskers at Memorial Stadium on October 14, 2017 in Lincoln, Nebraska.</p>

COLUMBUS, Ohio (AP) — An Ohio State University trustee who thought football coach Urban Meyer deserved more than a three-game suspension and resigned from the board over it said Thursday that he was alone in advocating a stiffer penalty when trustees discussed the matter.

Former board chairman Jeffrey Wadsworth resigned after Ohio State suspended Meyer and athletic director Gene Smith last week following a two-week investigation, which found they had tolerated bad behavior for years from a now-fired assistant coach also accused of but not charged with domestic violence.

"Since I fundamentally disagree with the outcome it would be hypocritical of me to continue as a Trustee," Wadsworth told board chairman Michael Gasser in an Aug. 22 email, the day of the suspension, and released by the university on Thursday.

Wadsworth told Gasser he heard enough in the meeting that day that he didn't want "to be a party, through endorsing today's decision or remaining on the Board, to implicitly or explicitly support current or future actions on such issues."

Wadsworth told the New York Times on Thursday he felt Meyer hadn't demonstrated "high-integrity behavior" and that the findings of the investigation "raised an issue of standards, values — not how many games someone should be suspended for."

The findings included that Meyer should have told university officials about domestic violence allegations made against the assistant in 2015 and that Meyer intentionally misled reporters about what he knew when asked about the matter this summer.

Wadsworth told the newspaper he left the Aug. 22 daylong meeting at lunch, learned of President Michael Drake's resulting decision after it was publicized, and resigned that night.

He wouldn't comment further about that move when reached by The Associated Press. He also isn't sharing others details about the trustees' private discussions on the matter, and no other members of the board have done so.

In an email to Wadsworth on Thursday, Gasser praised the investigative process.

Gasser said he was proud of the independence of Ohio State's investigative committee, the work done by a group of nationally recognized outside experts, and "the deliberative nature of our board" finding common ground given a complex set of facts.

"As you know, we are always stronger when individuals representing a range of diverse opinions review a set of facts together in an effort to best serve the university," Gasser said in the email, released by the university at AP's request.

In a statement Thursday, Ohio State said the trustees and Drake "had a frank and comprehensive discussion last week" and that "a wide variety of perspectives were expressed in reaching a consensus."

The school said Wadsworth, a retired president of Battelle Memorial Institute, was "an exceptionally valuable member of the board," where he'd served since 2010.

The Meyer discussion certainly wasn't his first involving the professional fate of a scrutinized employee with many fans. Wadsworth was board chairman in 2014 when Drake decided to fire marching band director Jonathan Waters after an investigation uncovered band traditions and rituals that were racy, raunchy or suggestive. Waters said he'd been trying to change such activities, but Drake and the university insisted that Waters controlled the band and answered for its practices, even those that came from old traditions.