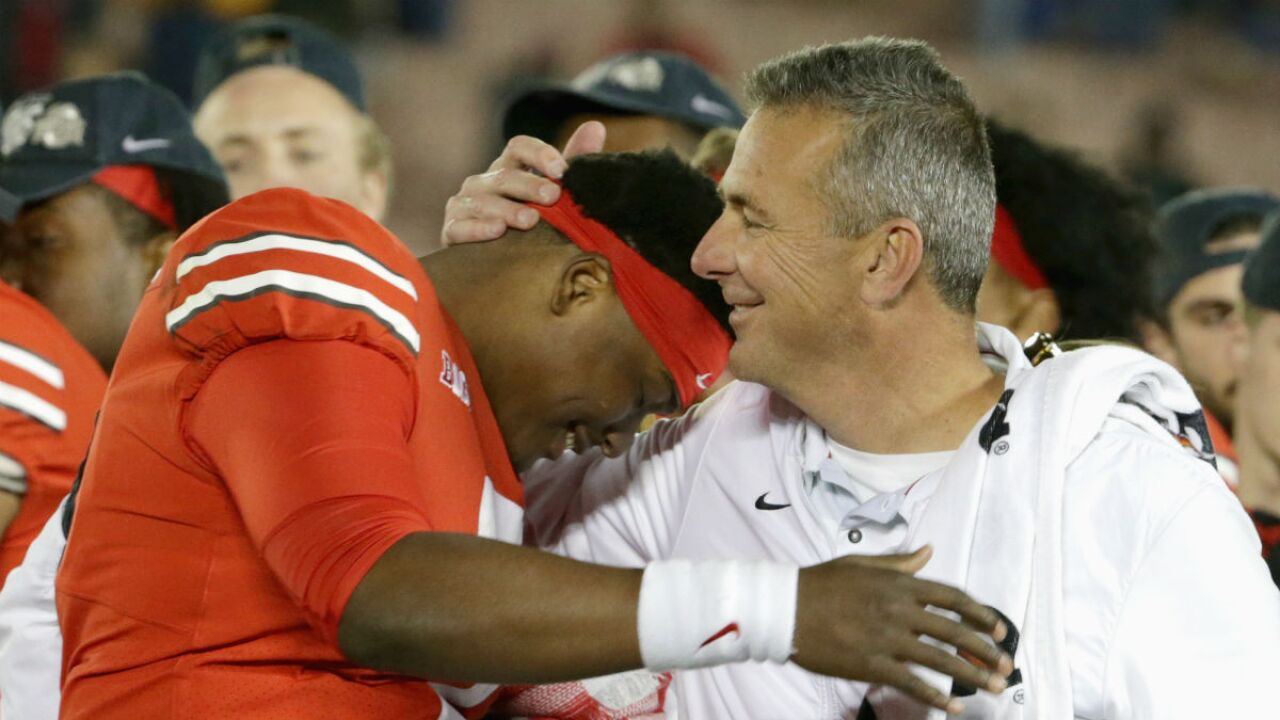 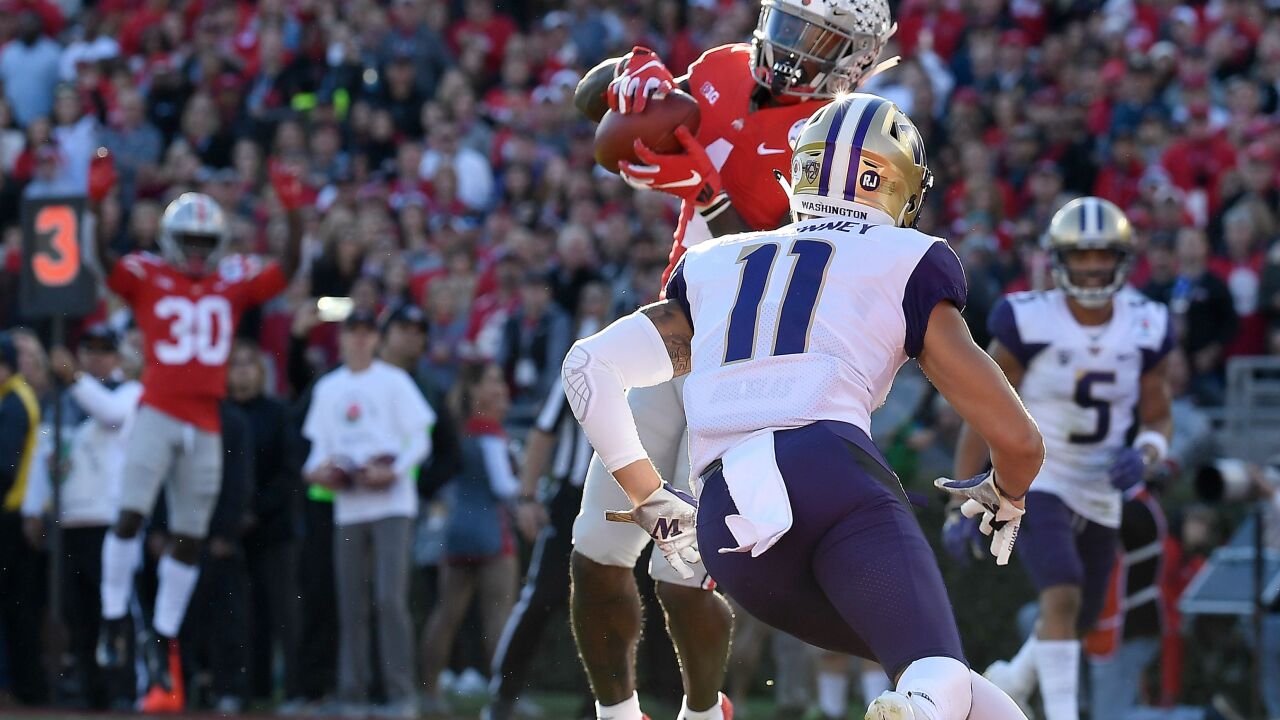 PASADENA, Calif. — Urban Meyer called himself "a very blessed man" after Ohio State gave him a Rose Bowl victory in the final game of his great coaching career.

Dwayne Haskins passed for three first-half touchdowns and the Buckeyes held off Washington's thrilling fourth-quarter comeback for a 28-23 victory in the 105th Rose Bowl on Tuesday.

After the confetti flew in the north end zone, the Buckeyes gathered around Meyer for one last celebration of their coach. He is walking away after going 83-9 at Ohio State with one national championship, three Big Ten titles and this Rose Bowl victory, the Buckeyes' eighth overall in the Granddaddy of Them All.

"I'm a very blessed man," Meyer said. "I'm blessed because of my family, (but) this team, this year, I love this group as much as any I've ever had."

Parris Campbell, Johnnie Dixon and Rashod Berry caught TD passes in the first half for the Buckeyes (13-1), who took a 28-3 lead into the fourth and seemed to be cruising to a blowout. Haskins' pass to Berry gave him 50 TD throws on the season.

But Washington running back Myles Gaskin threw a touchdown pass and rushed for two more scores for the Huskies (10-4), scoring from 2 yards out with 42 seconds left.

The Huskies got no closer, however: The Buckeyes intercepted Jake Browning's pass on the 2-point conversion attempt and then recovered Washington's onside kick.

Meyer cited his health last month in his decision to step down. A cyst in Meyer's brain causes severe headaches that are even worse for a man who says he gets "deathly ill" before big games.

Meyer largely refused to reflect publicly on his career during the month since he announced his plans. After he shook Washington coach Chris Petersen's hand, raised the trophy and walked off the Rose Bowl turf, Meyer finally thought about the journey that brought him back to his home state.

"Every week, every yard, every down, when we recruited these players, I just wanted to make sure that we made the great state of Ohio proud," Meyer said. "And once again, we weren't perfect, but we did a lot of good things."

Meyer insists his three-decade collegiate coaching career is over. After starting out as a graduate assistant at Ohio State, he has been a head coach since 2001, achieving huge success at Bowling Green, Utah and Florida before his stellar run in Columbus.

These Buckeyes are Meyer's eighth team to finish with one loss or fewer in his 17 seasons as a head coach.

"He's a really tough guy," said Ohio State running back Mike Weber, who rushed for 96 yards. "Sometimes you never really know what he's thinking. He really doesn't show a lot of emotion, but I felt him today. You could tell he was giving his all. It felt a little different."

This could be Haskins' farewell to Ohio State as well, if the sophomore goes pro. He threw for 251 yards, picking apart a vaunted Washington secondary minus injured Taylor Rapp, the second-team All-American safety.

Browning passed for 313 yards and Gaskin rushed for 121 in the final game of the four-year starters' landmark careers at Washington, which has lost three straight New Year's Six bowl games.

After this big finish in Pasadena, Meyer formally turns over the Ohio State program to Ryan Day, his 39-year-old co-offensive coordinator.

Although Meyer's final season began with an embarrassing three-game suspension over his mismanagement of domestic abuse accusations against former assistant Zach Smith, Day filled in capably during his absence. Meyer then propelled the Buckeyes to another largely dominant regular season, even without star defensive lineman Nick Bosa -- although they missed out on the playoff thanks to one blowout loss to Purdue.

Ohio State: The Buckeyes carved up Michigan and Northwestern through the air to reach the Rose Bowl, and their fluid offense did enough to beat Washington despite punting five straight drives late in the Rose Bowl. Ohio State fans can only wonder whether this bunch of Buckeyes would have done better than overmatched Notre Dame or Oklahoma in the playoff semifinals.

Washington: The loss wrapped up a nightmare football season for the Pac-12. The Huskies were the class of the conference, but they'll be frustrated with a campaign bookended by losses to national powers Auburn and Ohio State.

Ohio State: Day is now the 25th head coach in program history, and he has plenty of work to do. Haskins could be the first quarterback drafted if he leaves, and he's just one key contributor who must be replaced. But Meyer has built a finely tuned machine in Columbus, and he seems certain Day is the man to drive it forward.

Washington: Replacing the most prolific quarterback and running back in program history will be no easy task, but many Huskies fans are excited to see what the next generation of skill-position players can do. Petersen has built a powerhouse in his half-decade in Seattle, and the Huskies' recruiting skill should keep them in position to contend for a return trip to Pasadena almost every year.