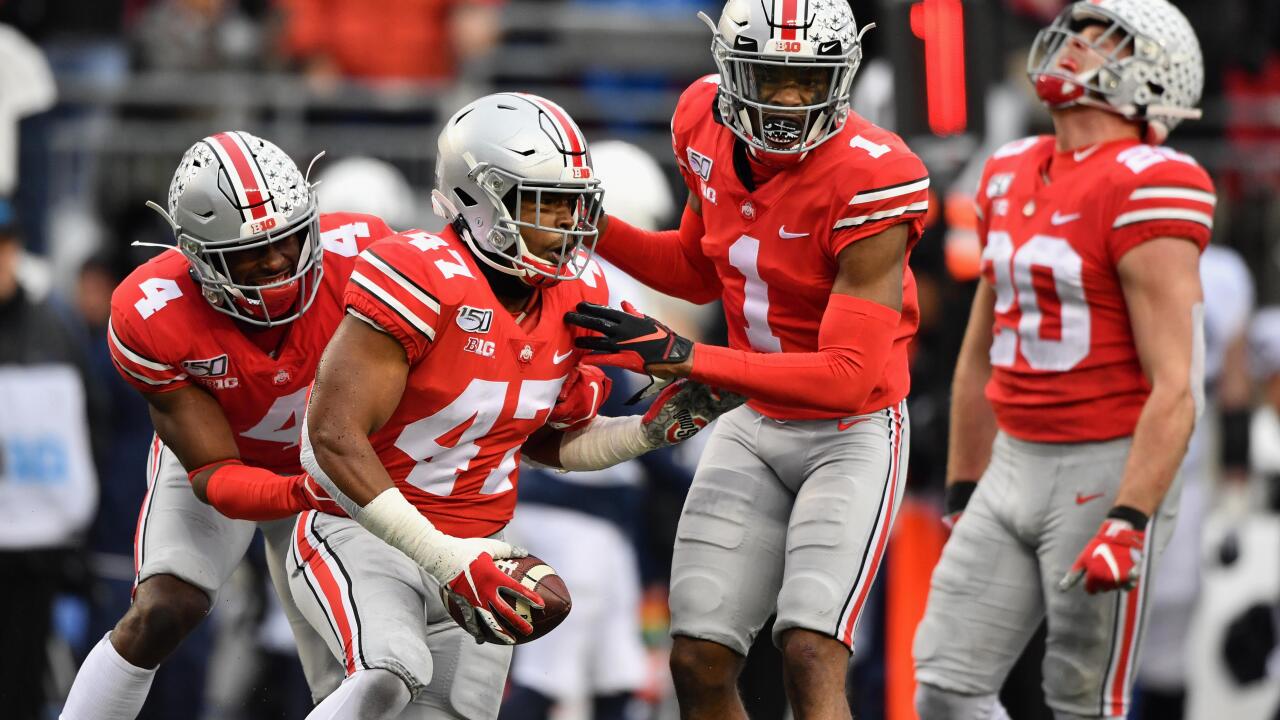 ANN ARBOR, Mich. (AP) — Ohio State is two wins away from having a shot at winning a second national championship in five seasons and a third title this century.

Michigan is in the way.

The Buckeyes, ranked No. 1 in the College Football Playoff and No. 2 in The Associated Press poll, have won seven straight and 14 of 15 against the Wolverines in a dominating stretch that has taken a lot of suspense out of the series.

Ohio State is about a double-digit favorite to win Saturday at the Big House, where it is expected to set a school record with an eighth straight win in a rivalry that started in 1897.

The Buckeyes (11-0, 8-0 Big Ten) have already clinched a spot in the conference championship game with first-year coach Ryan Day and will face No. 9 Minnesota or No. 13 Wisconsin next week in Indianapolis.

Make no mistake, they will take No. 10 Michigan (9-2, 6-2, No. 13 CFP) seriously, because no one wearing scarlet and gray wants to give a desperate rival any satisfaction.

The Wolverines, meanwhile, acknowledge it gives them an added incentive to have an opportunity to spoil Ohio State's season.

"This is something that is not only important to them, but important to us," Michigan tight end Nick Eubanks said.

The outcome is certainly important for Jim Harbaugh, who is winless in The Game as a coach after having some success in the series as a quarterback more than three decades ago.

Harbaugh is not in danger of losing his job if he falls to 0-5 against Ohio State, but a victory would without a doubt give him and college football's winningest program a much-needed boost.

A loss to close the regular season would define another year as something short of great even if the Wolverines win their bowl game to have a fourth 10-win season under Harbaugh.

Here are some things to watch when Michigan meets Ohio State for the 102nd straight season and 116th time overall:

Both teams are thankful to have transfers at quarterback, both of whom didn't have to sit out a year after getting a waiver from the NCAA.

Justin Fields spent his freshman season at Georgia in 2018. He has been spectacular this season at Ohio State, throwing 33 touchdowns with only one interception and running for 10 scores. Fields seemed to avoid a scare in last week's win over then-No. 9 Penn State, going down on a play in the fourth quarter and getting up slowly.

"For sure, any time you see your starting quarterback on the ground, it's not a good feeling," Day said. "He was able to shake it off, run off the field. We expect him to be fine."

Shea Patterson was at Mississippi for his first two seasons before starting every game — and winning every one at home — as a junior and senior with the Wolverines. He became the first in school history to throw four-plus touchdown passes in two straight games over the last two weeks.

The Heisman Trophy candidate has a nation-leading and school-record 16½ sacks in just nine games. He had three sacks and six other tackles against the Nittany Lions in his return from a two-game NCAA suspension.

Harbaugh seemed to hint Michigan is planning to do some things it hasn't before in its quest to beat Ohio State for the first time since 2011.

It would not be surprising to see Michigan defensive coordinator Don Brown use more zone schemes than he usually does, especially after his man-to-man coverages were shredded by Ohio State last season.

Harbaugh hopes the Buckeyes spent some time this week trying to figure out what trick plays Michigan might use on offense and special teams.

Ohio State's defense has been much better than it was last year, and a pair of former Michigan assistants have helped make the turnaround happen.

The Buckeyes have the top-ranked defense in the country, giving up just 217.4 yards per game. That turnaround came after co-defensive coordinator Greg Mattison and linebackers coach Al Washington were hired away from Harbaugh's staff on consecutive days last winter.

Harbaugh dodged a question about facing his former assistants. His players insisted they didn't have hard feelings about coaches who left in part because they were given substantial raises.

"They had to make decisions for themselves and their families," Michigan linebacker Khaleke Hudson said. "I've got nothing but the utmost respect for both of those guys."

Michigan's defense has been motivated to play since letting a closely contested game turn into a rout at the Horseshoe last season.

The Wolverines trailed by two points late in the first half and eight late in the third quarter before unraveling over the final 19 minutes and losing 62-39 to Ohio State.

"It fuels us," Hudson said.