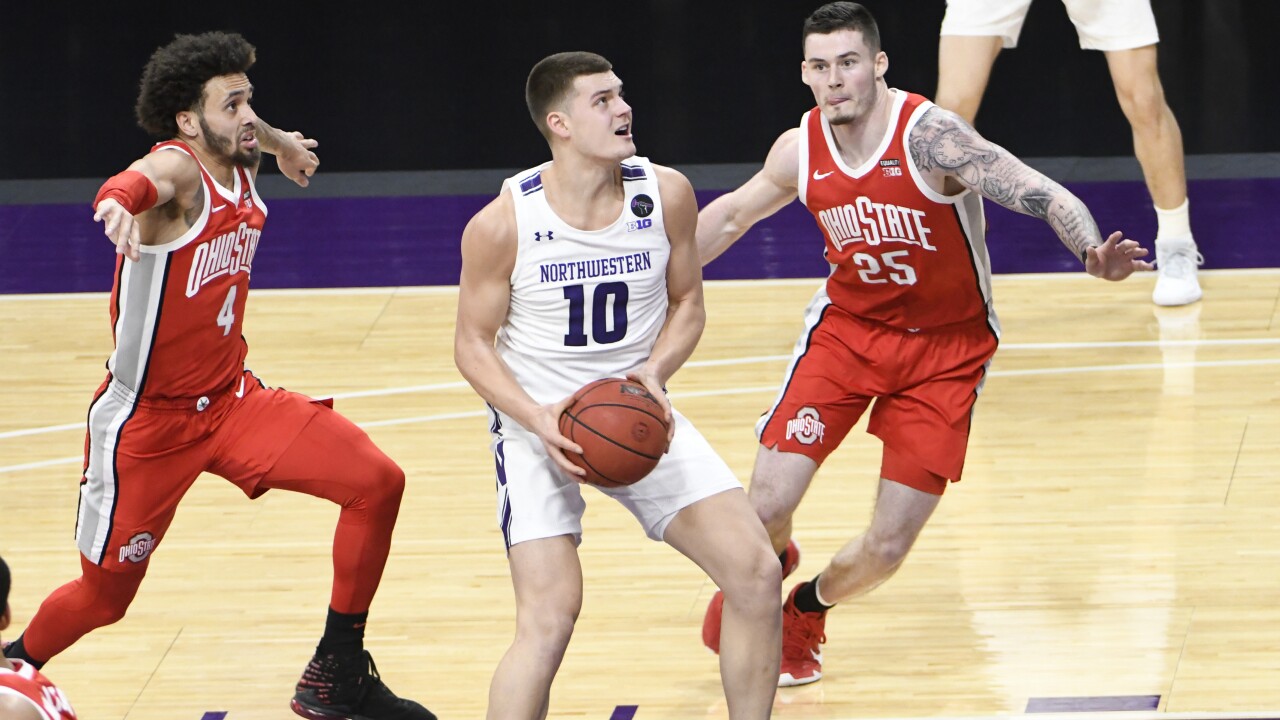 (Copyright 2021 The Associated Press. All rights reserved. This material may not be published, broadcast, rewritten or redistributed.)
David Banks/AP
Northwestern forward Miller Kopp (10) drives to the basket as Ohio State forward Kyle Young (25) guards him during the second half of an NCAA college basketball game, Saturday, Dec. 26, 2020, in Evanston, Ill. (AP Photo/David Banks)

The Buckeyes opened the second half on a 13-7 run before Northwestern rallied with a 7-1 run. Ohio State led by seven after halftime, but Northwestern came back with an 11-2 run.

Kopp hit a jumper to pull Northwestern within 66-65 before Chase Audige’s 3 put the Wildcats ahead with 1:48 left. Young’s jumper tied it before Buie’s 3 gave Northwestern a 71-68 lead with 1:04 remaining. Young hit two free throws to bring Ohio State within one with 47 seconds left.

Northwestern shot 48% from the field to the Buckeyes’ 44%. Ohio State outrebounded the Wildcats 40-26 but made four 3s to Northwestern’s six.

Ohio State scored the first eight points of the game before Northwestern responded with 14-2 run. Kopp scored 12 of Northwestern’s first 14 points and had 14 at halftime. Nance hit two free throws with 0.4 seconds left before halftime to tie it 34-34.

Ohio State: The Buckeyes stumbled after coming off a big victory Wednesday, rallying from a 16-point second-half deficit to upset No. 11 Rutgers 80-68.

Northwestern: The Wildcats are showing promise after going 8-23 last season. Northwestern upset then-No. 4 Michigan State 79-65 on Sunday for its first win over a top-five team since beating Magic Johnson and the fourth-ranked Spartans on Jan. 27, 1979.

Northwestern: Visits No. 4 Iowa on Tuesday.