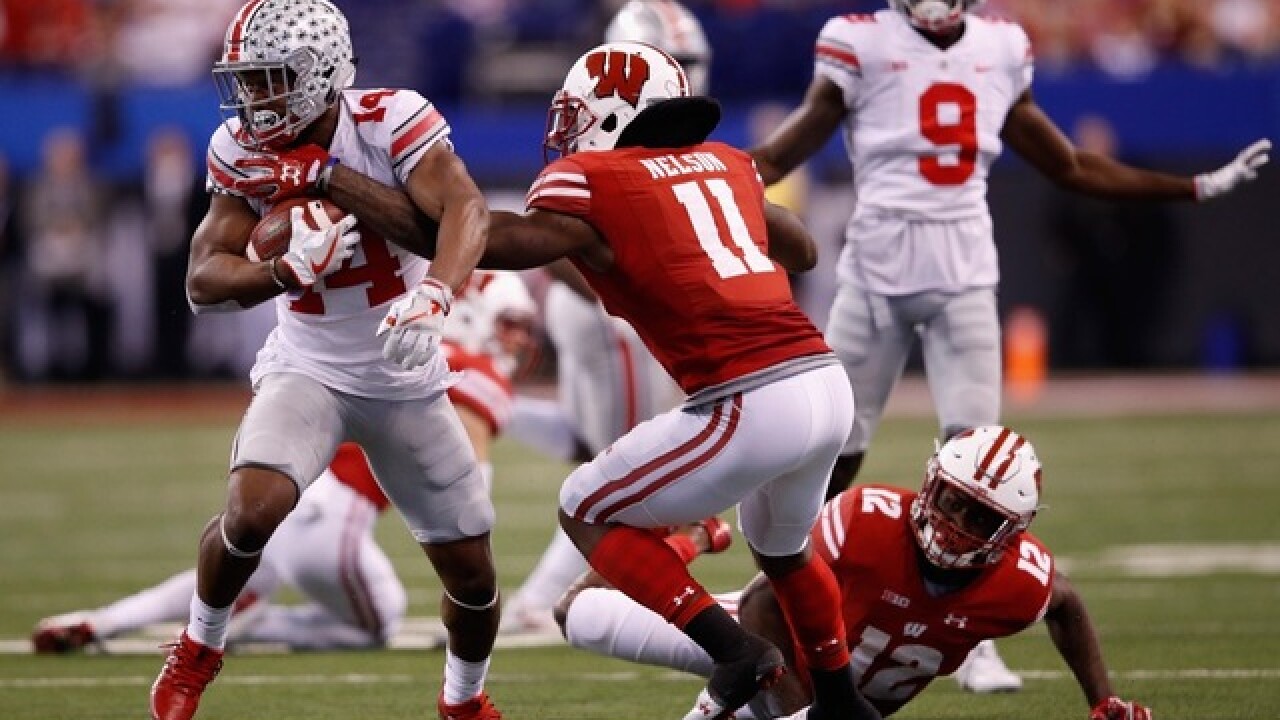 INDIANAPOLIS -- J.T. Barrett felt and played like his old self Saturday.

The only thing that would make the Ohio State quarterback feel better would be making the playoffs.

Six days after undergoing surgery on his right knee, Barrett started the game, threw two touchdown passes, ran for another and led No. 8 Ohio State to a 27-21 victory over previously unbeaten No. 3 Wisconsin for the Buckeyes’ first Big Ten title since their 2014 national championship run.

“We have two wins over two top-four team and another one over a team ranked 12th or 13th,” said coach Urban Meyer, who included a win over Penn State in his rundown. “We’re a conference champion and we deserve a shot.”

All the Buckeyes (11-2, No. 8 CFP) can do now is wait to see if college football’s selection committee agrees.

With one final chance to make an impression, Ohio State ended the Badgers’ perfect season and the nation’s longest active winning streak at 13 by winning their fourth in a row.

And they did it behind a quarterback many expected to be watching.

But unlike most athletes, who need at least two or three weeks to recover from minor knee surgery, Barrett told doctors and coaches he would be OK.

After watching Barrett in pregame warmups with a protective brace around the injured knee, Meyer gave his three-time captain the starting nod. Barrett didn’t disappoint.

He wound up 12 of 26 for 211 yards and two interceptions and ran 19 times for 60 yards including a crucial fourth-down conversion that set up the last field goal of the game.

“We expected to see the best and he was,” Badgers coach Paul Chryst said of Barrett. “He’s a heck of a quarterback.”

It didn’t take Barrett long to get going, either.

Following a 9-yard run on third down on the Buckeyes’ second possession he hooked up with a wide open Terry McLaurin for an 84-yard TD pass to make it 7-0.

Two possessions later, Barrett threw a short pass to Parris Campbell, who turned a missed tackle into a 57-yard mistake for another score. Then after a 77-yard run by J.K. Dobbins, Barrett powered in from the 1-yard line to give the Buckeyes a 21-7 lead early in the second quarter.

“It never does (surprise me),” Meyer said. “That’s just because I’ve had (Tim) Tebow — this kid is a lot like him. How you keep him out of the game I just don’t know how it happens.”

The only time he really paid for it, though, came on an ill-advised pass from near his goal line in the first quarter. Barrett was picked off by Andrew Van Ginkel, who returned it 9 yards for a Wisconsin score.

Otherwise, the Buckeyes stayed pretty much in control and kept Barrett out of trouble.

“I didn’t have any pain in my knee,” Barrett said before answering whether the Buckeyes deserve a playoff spot. “I feel like we’re one of the best teams in the country.”

Wisconsin got within 21-10 at halftime and 21-13 early in the third quarter before the offense got into the end zone on Chris James’ 1-yard run early in the fourth. A conversion pass from Alex Hornibrook to Troy Fumagalli cut the deficit to 24-21.

But Barrett’s extra effort on the fourth down play set up the field goal and the Buckeyes defense stopped Wisconsin twice to close it out.

Ohio State: Since getting blown out at Iowa last month, the Buckeyes have been trying to play their way back into the playoff picture. The win over Wisconsin just might do it. Three of the four playoff spots were likely sewn up Saturday, going to Big 12 champ Oklahoma, SEC champ Georgia and ACC champ Clemson. Will the committee take another conference champion over Auburn or Alabama? Stay tuned till Sunday.

Wisconsin: Critics contended the Badgers were never as good as their undefeated record because of a weak schedule. On Saturday, they fought to the end but still came up short. The usually stout defense missed too many tackles and gave up too many big plays.

The last time Dobbins played a game in Indiana, he rushed for freshman game record of 181 yards in a rout over the Hoosiers. This time, Dobbins broke Maurice Clarett’s season freshman record at Ohio State. And all he needed was one run. Dobbins finished with 17 carries for 174 yards and surpassed Clarett’s total of 1,237 yards on the 77-yard run. He finished the day with 1,364 yards. Dobbins was named the game’s MVP.

Wisconsin started the game as the only team in the nation that hadn’t trailed in the fourth quarter. That streak ended when the Badgers opened the fourth down 24-13. Jonathan Taylor’s streak of four straight 100-yard games also ended Saturday. The Big Ten rushing champ was held to 41 yards on 15 carries and failed to score for the fourth time this season.

The game was delayed after the seams of two pieces of turf came apart during James’ TD run. The refs immediately stopped play and summoned maintenance, which spread a black substance underneath the turf and rubber pellets on top of the turf. After about 10 minutes, the game resumed to the roar of the crowd.

Ohio State: Will find out where it’s heading this postseason on Sunday.