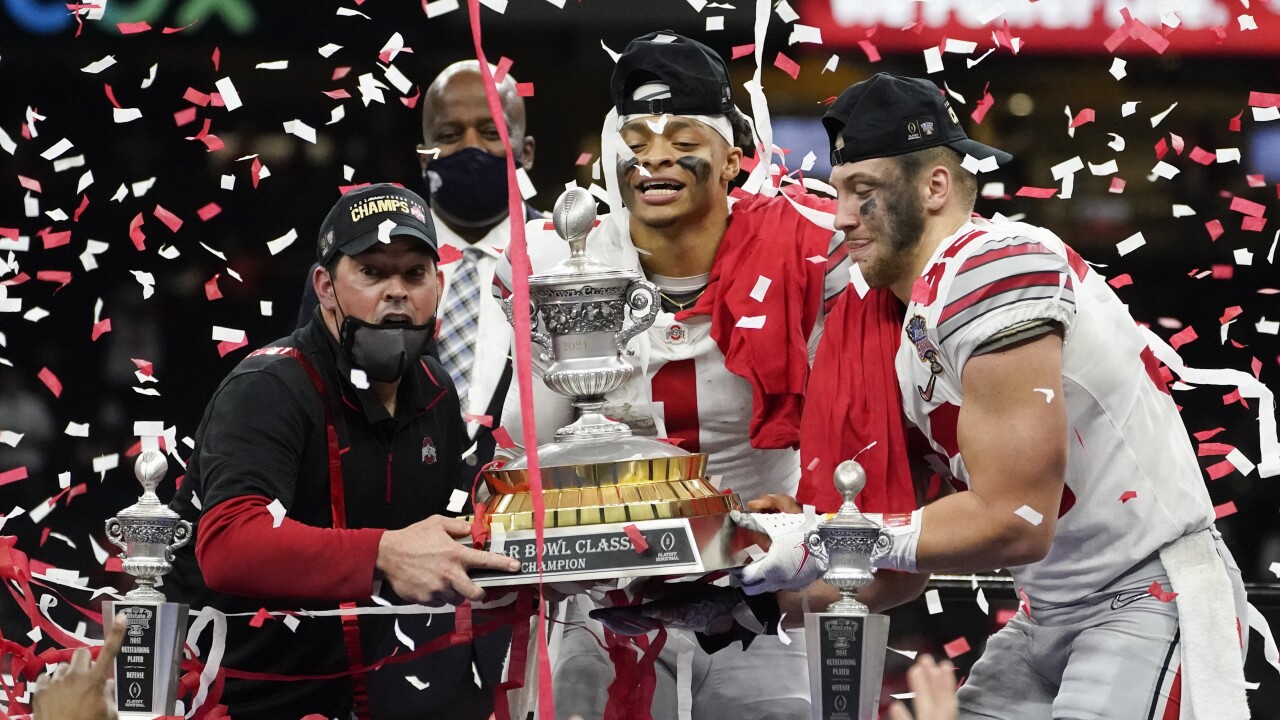 Alabama breezed through the regular season and college football’s semifinals, surviving a solitary scare in the Southeastern Conference championship game to reach its expected destination.

Ohio State wasn’t exactly a shoo-in with its abbreviated schedule but resoundingly proved it belonged in the College Football Playoffs with a semifinal thrashing of Clemson.

The Buckeyes and Crimson Tide traveled different paths to get to Monday’s title game at Hard Rock Stadium in South Florida, but both had to navigate the challenges of a pandemic-altered season

“I know this has been a little bit of a trying year for a lot of folks,” Nick Saban, the top-ranked Crimson Tide’s coach, said Monday.

It’s not a finale that could be taken for granted.

No. 3 Ohio State’s odyssey included an abbreviated Big Ten season with three games canceled because of COVID-19 issues, including the Buckeyes’ own outbreak.

“This team, this program, we persevered through so much,” Ohio State running back Trey Sermon said Monday. “To have the opportunity to play on such a big stage, it means a lot to us.

“We’ve been through a lot. I mean, we fought to just play, and just to be able to get the job done, to make it to this level, it just means a lot to us.”

The Tide (12-0) advanced with a 31-14 win over Notre Dame in the Rose Bowl, played in Arlington, Texas, not southern California in yet another example of just how different this season has been.

Before that, Alabama navigated 11 straight SEC games, including wins over three teams currently ranked among the top 11, before facing Notre Dame.

The Tide also won the Iron Bowl against Auburn with offensive coordinator Steve Sarkisian — who takes over the Texas Longhorns program following the game — running the show while Saban was sidelined by COVID-19.

In addition to Sarkisian’s imminent departure, Alabama has to take care of some Heisman Trophy business while preparing for the matchup with Ohio State. Both wide receiver DeVonta Smith and quarterback Mac Jones are among the four Heisman finalists, along with quarterbacks Trevor Lawrence of Clemson and Kyle Trask of Florida.

Smith isn’t interested in talking about the award being handed out virtually on Tuesday, saying his focus is on preparing for the Buckeyes.

“Right now I’m not really worried about the Heisman Trophy,” he said.

Monday’s game is a rematch of a semifinal game in the first College Football Playoffs six years ago. Ohio State (7-0) won that meeting en route to the national title.

There were questions whether this Buckeyes team deserved to be in CFP, but Ohio State routed favored Clemson, erasing sentiments that another Tigers-Crimson Tide title showdown was all but inevitable.

If Smith shared those expectations, the Alabama wide receiver kept them to himself.

“I mean, I’m not part of the committee, so I have no say-so in who they put in and who they wanted to put in,” Smith said. “At the end of the day, we just show up here, practice, and get ready for whoever the next opponent is.”

The big question for Ohio State Monday was the health of quarterback Justin Fields, who took a vicious shot to the side in the first half against Clemson.

Buckeyes coach Ryan Day didn’t give details on the nature of or provide any detailed updates Monday on the QB’s injury but said: “I definitely expect him to play.”

Here’s a look at each team’s path to the Monday’s showdown:

Overview: Has mostly coasted into the title game with few challenges, outscoring opponents by an average of 48-19 points. The Tide ranks second nationally in scoring offense, behind only Kent State, fifth in scoring and sixth in total offense.

Best regular-season win: While the win over No. 5 Texas A&M looms largest now, then-No. 2 Alabama rallied from a halftime deficit against third-ranked Georgia with 21 unanswered points in a 41-24 win.

Best player: Smith has shattered Alabama and SEC receiving records with a season that has made him a leading Heisman Trophy candidate. Smith caught three touchdown passes against Notre Dame.

Overview: Like many teams, Ohio State faced major obstacles during the pandemic. First the Big Ten canceled fall football. After an about-face, an abbreviated schedule led to questions about Ohio State’s inclusion in the final four. The Buckeyes validated the decision, going up three touchdowns by halftime against Clemson in the semifinals.

Best regular-season win: 42-35 win over No. 7 Indiana, a victory that lost some of its luster after the Hoosiers fell to Mississippi in the Outback Bowl. The Buckeyes withstood a challenge after giving up two touchdowns early in the fourth quarter.

Toughest hurdle: The Buckeyes silenced the naysayers with a 49-28 win over Clemson and Lawrence.

Best Player: Fields looked like a Heisman contender much of the season, before a lackluster performance in the Big Ten championship game against Northwestern. Then he outshined Lawrence with an impressive 22-of-28, 385-yard performance when he set a Sugar Bowl record with six touchdown passes.